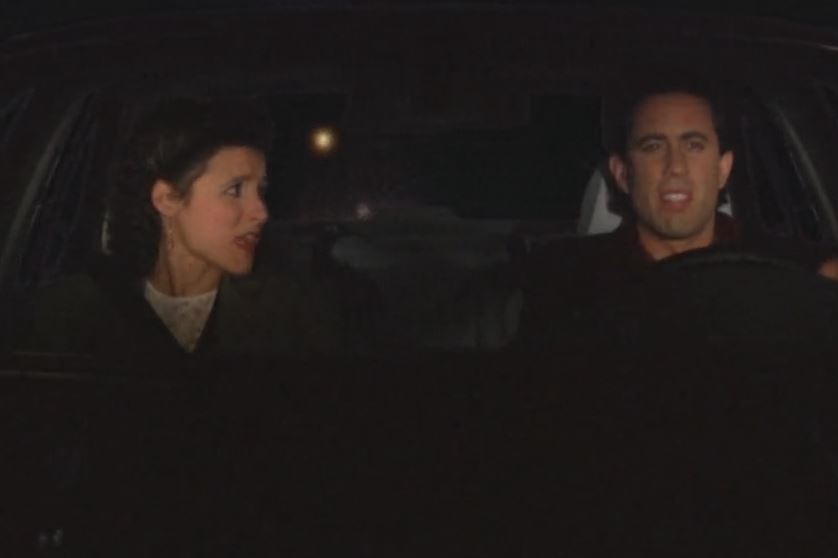 A restaurant valet with terrible BO leaves an unfathomably strong odour in Jerry's car. Meanwhile, George is intrigued when he learns that his ex-girlfriend, Susan has become a lesbian.

George: Someone stole the video right out of the car!
Jerry: Someone stole Rochelle, Rochelle?
Restaurateur: Well, you left the window open.
Jerry: We had to air out the car.

Jerry: Hey, I've never smelled in my life, buddy.
Restaurateur: Really? Well, I can smell you now.
Jerry: That's from the car!

Susan: You okay?
George: Yeah, yes! I just haven't seen you in a long time.
Susan: And you didn't expect me to be holding hands with a woman.
George: Oh, please! Me? C'mon? That's great! Are you kidding? I think that's fantastic! I've always encouraged experimentation! I'm the first guy in the pool! Who do you think you're talking to?
Susan: I KNOW who I'm talking to.
George: Of course you do...It's just, uh, y'know, I-I never knew, uh, that, uh...
Susan: I liked women.
George: There you go.

George: (about "Rochelle, Rochelle") It's not even frontal nudity. It's, err... sidal nudity.

George: (on Kramer) He stole your girlfriend?
Susan: Yes. She's in love with him.
George: Amazing. I drive them to lesbianism, he brings 'em back.

Jerry: It still smells.
George: How could it still smell after all that?
Jerry: I don't know.
George: Well, what are you gonna do?
Jerry: I'll tell you what I'm gonna do, I'm selling that car.
George: You're selling the car?
Jerry: You don't understand what I'm up against. This is a force more powerful than anything you can imagine! Even Superman would be helpless against this kind of stench! And I'll take anything I can get for it.
George: Maybe I'll buy it.
Jerry: Are you crazy? Don't you understand what I'm saying to you? This isn't just an odor! You need a priest to get rid of this thing!
(Elaine comes in)
Elaine: I still smell.
Jerry: You see? You see what I'm saying to you? It's a presence! It's the beast!

Elaine: When you're with a guy, and he tells you he has to get up early, what does that mean?
Jerry: It means he's lying.

George: So, let me ask you. Do you think I did this?
Jerry: No, no. It's the valet guy.
George: No, no, I mean, driving Susan to lesbianism.
Jerry: Oh no, that's ridiculous.
George: What if her experience with me drive ger to it?
Jerry: Suicide, maybe, not lesbianism.

Jerry: Well, sometimes we do actually have to get up early, but a man will always trade sleep for sex.

Elaine: What am I, hard of smelling?

Jerry: So, this morning, I go down to the garage to check the car out. I figure by this time, the odor molecules have had at least twelve hours to de-smellify. I open the car door, like a punch in the face, the stench hits me. It's almost as if it had GAINED strength throughout the night.

George: Oh, this isn't even BO. This is beyond BO. It's BBO.

Manager: What do you mean-- "stunk up?"
Jerry: I mean the car stinks! George, does the car stink?
George: Stinks.
Jerry: Stinks!

Jerry: There should be a B.O. squad that patrols the city like a "Smell Gestapo". To sniff 'em out, strip 'em down, and wash them with a big, soapy brush...

Jerry: (to Elaine) I opened the car door this morning; it was like a punch in the face! It was almost as if the smell GAINED strength overnight.

George: (finding out that his former girlfriend is a lesbian) Y'know, the funny thing is, somehow I find her more appealing now... It's like if I knew she was a lesbian when we went out, I never would've broken up with her.

Jerry: (to the restaurateur, who thinks Jerry has the BO) Well, then go out and smell the car, see which smells worse.

Kramer: You "stink." Why don't you go take a shower?
Jerry: I showered! Oh, wait a second. Since I showered, I've been in the car.
Elaine: So?
Jerry: Don't you see what's happening here? It's attached itself to me! It's alive!

Jerry: (referring to the car) This...THING...has got to be stopped!

Restaurateur: I don't have time to smell cars.
George: Forget about smelling the car. Smell the valet. Go to the source...

When Jerry says, "It's a presence, it's the beast!" he is making a reference to William Golding's novel "Lord of the Flies".

When Jerry and George go to the restaurant to demand that something be done about his smelly car, a woman can be seen standing behind the maitre d' in one shot, but she cannot be seen behind him in the other shot.