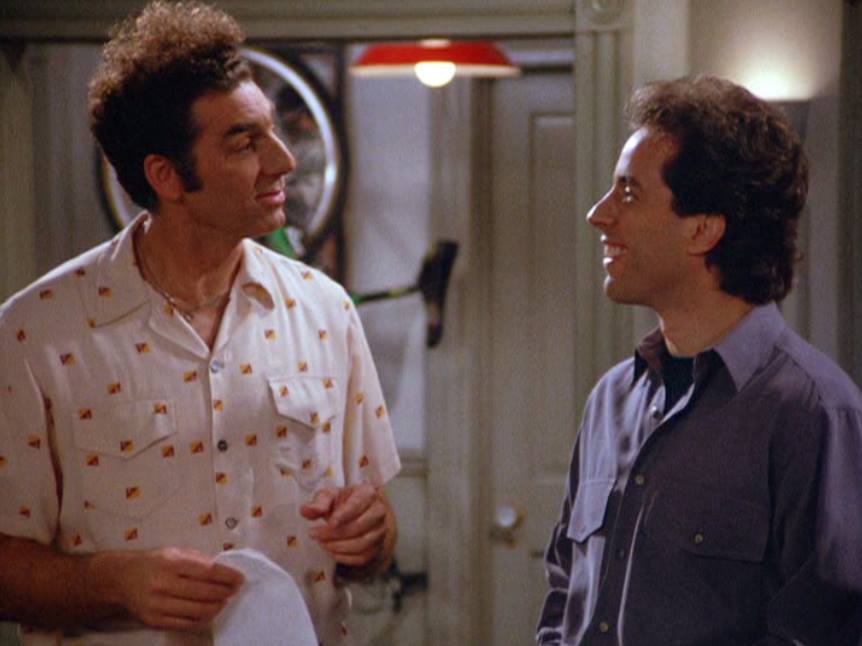 Going out to buy an engagement party present for "The Drake," George parks his father's car in a handicap parking spot, after taking Kramer's advice. An angry mob trashes the vehicle when a disabled woman gets injured, because of the illegal parking. While visiting the woman at the hospital, Kramer falls in love and feels compelled to replace the wheelchair. George becomes his father's butler after his father gets arrested for parking in the spot.

George: Is it my imagination, or do really good-looking women walk a lot faster than everybody else?
Elaine: We don't walk that fast.

Jerry: Your father got arrested? What for?
George: Parking in a handicap spot. Right in the middle of his United Volunteers meeting. When he got back, he chased after me with a baseball bat.

Jerry: How about this: You put your car in the good spot. That'll hold the good spot in front of the good building and we can get the good car!
George: Good thinking.
Jerry: (shaking George's hand) Good to meet you.

Jerry: We'll give the keys to Elaine.
Elaine: Me?
Jerry: Yeah. You're a woman. Men won't hit a woman.
Elaine: Oh, they won't?
Jerry: Not if they don't know you.

George: I hate this mall, there are never any spaces here...
Kramer: Why don't you park in front of the hydrant?
George: What if there's a fire?
Kramer: Now what are the chances of that?

Jerry: We'll have to take your car, it's got the most room.
Kramer: No, no. My car's not running.
(George comes out from the bathroom)
Jerry: What about your father's car?
George: No, no, no. Out of the question. I was over there today. He's got the good spot in front of the good building in the good neighborhood. I know he's not gonna wanna move.
Jerry: Are you serious?
George: You don't know what that spot means to him. Once he gets it, he doesn't go out for weeks.

Kramer: She's got everything I've ever wanted in another human being ... except for the walking.

Jerry: Hey, what's going on?
Angry Woman: Some jerk parked in the handicap spot, so this woman in a wheel chair had to wheel up this incline, and half way up her batteries gave out, and she rolled backwards into the wall. They had to take her to St. Elizabeth's...
Jerry: Is she okay?
Angry Woman I don't know. We're just waiting here for the owner of this car to show up. He may not get out alive. Lazy bum! Taking up a handicap spot? He's gonna pay?
Jerry: Sons of bitches.

Kramer: I love the name 'isosceles'. If I had a kid, I would name him Isosceles. Isosceles Kramer.

George: What are we gonna do? How are we gonna get out of here?
Jerry: The thing is, even if we go back by the car, and they're not there, how do we know they're not all hiding, waiting for us?
Elaine: Well, they have to give up sometime, they can't stay out there all night.
Jerry: What are we, John Dillinger? I mean, how did this get to be the crime of the century? It's not like we stuck a broomsticks in her spokes and she went flying.

Kramer: Make sure we dont forget where the car is parked.

Jerry: (as George picks up a broken piece of his father's car) You know, a lot of these scratches will buff right out...

Maj-Jongg Lady: (referring to George) Frank, the important thing is, he didn't get hurt.
Frank Costanza: No it isn't!

Salesman: This is our best model, the Cougar 9000. It's the Rolls Royce of wheelchairs. This is like, you're almost glad to be handicapped.

Jerry's line, "You know, a lot of these scratches will buff right out", was completely improvised.

Although for almost the entire episode, as well as in future episodes, he is referred to only as "The Drake", the first time he is mentioned, The Drake's first name is given: Scott.

This episode was produced before "The Junior Mint", but was aired out of production order. It is for this reason that in this episode Jerry says that he is considering buying a yo-yo, but two he already has a yo-yo and shows the doctor a trick.

At the time of this episode's original airing, there was some controversy surrounding its plot. It was even speculated that the episode would never air. This may explain why it was shown out of production order.

In this episode, Kramer says that Lola insulted him, calling him a "hipster doofus". This was Larry David's response to an unfavorable review of the series, which described Kramer using the same term. Elaine also uses this same term to insult Kramer in Season 5's "The Glasses".

When this episode originally aired, John Randolph played Frank Costanza. In 1995, the scenes with Randolph were reshot with Jerry Stiller playing Frank for syndication reruns. Both versions are included in the 4th season DVD set, but the original is still shown on some streaming services.

When George visits his parents he sits down on the couch while his mother is playing Mahjong and he opens up a "Glamour" magazine, the same magazine he was "reading" when his mom caught him in "The Contest".

When Kramer says, "Make sure that we don't forget where the car is parked," he is making a reference to reference to Season 3's "The Parking Garage", in which the gang spend the entire episode searching for Kramer's car in a mall's parking complex.

When they are considering parking next to the fire hydrant, notice that all the cars in the parking lot have California license plates.