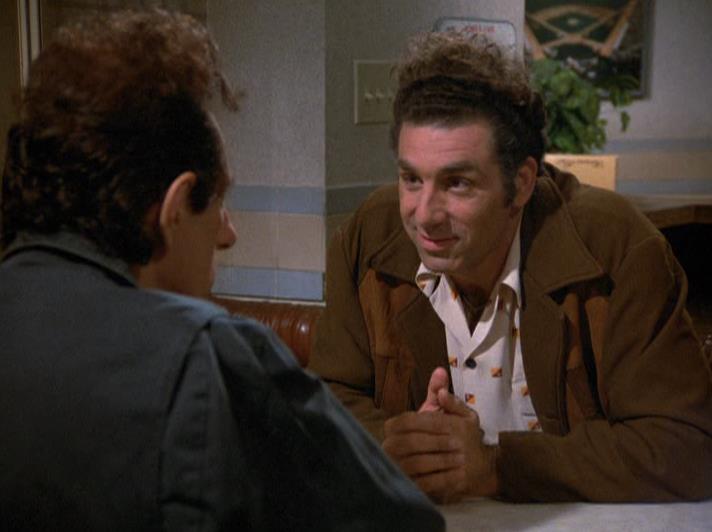 Now sex, I like the bottom. Let them do all the work. You should be writing this stuff down...

Jerry and George begin casting for their pilot. However, George fears that God will not let him live to be successful. Russel is distracted from the pilot, as he has become obsessed with Elaine. Getting mugged on his way home to use the bathroom causes Kramer to "miss his chance"; meanwhile, the whole gang notices that all of the new waitresses at the coffee are particularly buxom.

Jerry: (to George) You know the message you're sending out to the world with these sweat pants? You're telling the world: I give up! I can't compete in normal society. I'm miserable, so I might as well be comfortable.

Jerry: According to most studies, people's number-one fear is public speaking. Number two is death. Death is number two. Now, this means to the average person, if you have to go to a funeral you're better off in the casket than doing the eulogy.

(At the casting)
Melissa: It's like a bald convention out there. (She sees George) Sorry, I made a faux pas.
Jerry: No, you didn't, he knows he's bald.

TV Elaine: I want to know her from the inside. What is she like? Tell me about her.
Jerry: Well, she's fascinated with Greenland. She enjoys teasing animals Banlon and seeing people running for their lives. She loves throwing garbage out the window, yet she's extremely dainty.

Kramer: (Talking to the actor who will be playing him in the pilot) Now, sex, I like the bottom. Let them do all the work, you know? You should be writing this stuff down.

During the auditions, the lines are taken from the past episodes "The Pony Remark", "The Deal", "The Note" and "The Boyfriend: Part 1".

This two-part episode was nominated for the 1993 Emmy Award for Outstanding Individual Achievement in Editing for a Series - Multi-Camera Production.

According to the director and set designer, this episode used 30 sets, as much as many Hollywood movies.

Jerry states that "sic semper tyrannis" means "death to tyrants" in Latin. It actually means "thus always to tyrants" and is the Virginia state motto. John Wilkes Booth did say this after shooting President Lincoln, and some witnesses claimed that he added, "The South is avenged."

The conversation when George goes up to Larry Hankin (the guy playing Kramer), telling him to say his lines differently, actually happened between Larry David and Michael Richards.

When Kramer leaves the auditions to find the bathroom down the hall, the "Law & Order" poster on the wall reads backwards. Presumably, the shot was reversed to be consistent with Stu Shermack's directions of "on the right at the very end."