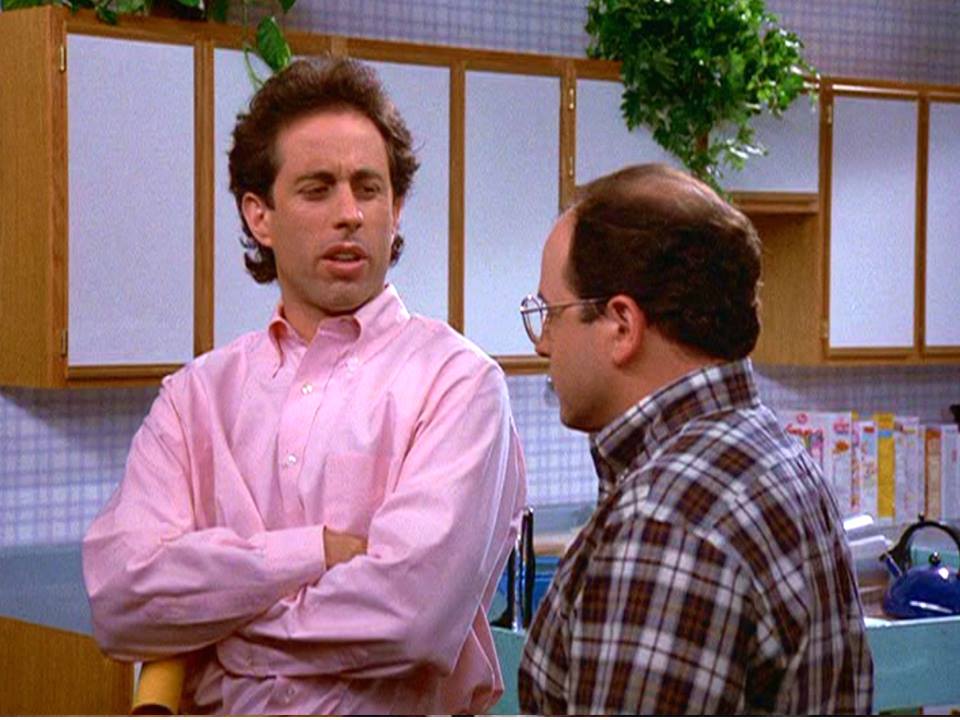 Why would anyone steal a box of raisins?

Rehearsals for the pilot begin. Russell's obsession with Elaine begins to affect his work. George asks TV Kramer about the raisins. The real Kramer might be forced to work on his plumbing problem by using the "dreaded apparatus." Elaine gets an investigation started on the owner of the diner. George gets the results of the biopsy of his white spot. At the taping of the pilot, Elaine sneaks in disguised and "Crazy" Joe jumps out of the audience. Elaine finds Morty's wallet in Jerry's couch. Everyone from the past season comments on the pilot as it's broadcast, they all think it's great. When Russell disappears, the fate of the pilot is in the hands of the new president, a person convinced that Jerry can't act.

Calvin Klein: (about Jerry) I like his style. He has a sort of casual elegance.
Tia: But he picks his nose.

George: Listen, I know we've had our problems in the past, but we've got a show to do tonight. Pull together as a team. Life's too short. I say let's let bygones be bygones. If you took the raisins, if you didn't take the raisins. They weren't even my raisins. I was just curious because it seems like a strange thing to do, to walk into a room, audition, and walk out with a box of raisins. Anyway, whatever. If you ever want to tell me about it, the door to my office is always open. In the event that I get an office. You'll come in, we'll talk about the raisins, have a nice laugh.
TV Kramer: How'd you like it if I just pulled your heart out of your chest right now and shoved it down your throat?

(Advising a constipated Kramer)
Jerry: My friend it may be time to consider the dreaded apparatus.
Kramer: Hold it right there. If you're suggesting what I think, you're wasting your time. I am not, Jerry, under any circumstances, doing any inserting in that area.

George: (on the phone) This is George Costanza. I'm calling for my test results. Negative? Oh, my God! Why? Why? Why? What? Negative's good? Yes, of course. How stupid of me.

George: What about Davola? Did you believe that? What was that thing he yelled out, sic semper tyrannis? Is that Latin? Jerry: John Wilkes Booth yelled it when he shot Lincoln.
George: Really? What's it mean?
Jerry: It means "death to tyrants."
George: I could see that.

TV Butler: I need more Pledge.
Jerry: More Pledge? I just bought two cans last week, and I don't have any wood in the house.

Jerry: Did you ever notice a lot of butlers are named Jeeves? I think when you name a baby Jeeves; you've pretty much mapped out his future. Not much chance he's gonna be a hitman. "Terribly sorry, sir, but I'm going to have to whack you."

In the original broadcast, the scene immediately before the pilot begins filming, in which TV George frantically tells Jerry he can't remember any of his lines, is longer.

In the episode "The Bubble Boy" the father mentions that the boy is in the bubble with the remote. However, in this episode we see the remote is outside the bubble and he fights over it with his parents.

This two-part episode was nominated for the 1993 Emmy Award for Outstanding Individual Achievement in Editing for a Series - Multi-Camera Production.

The Greenpeace member at the end who promises the ex-President of NBC that he would remember Elaine's name is played by Larry David, producer and co-creator of the show. The other man with him is writer Larry Charles.

Seinfeld may not have an opening credits sequence, but we see that "Jerry" does.