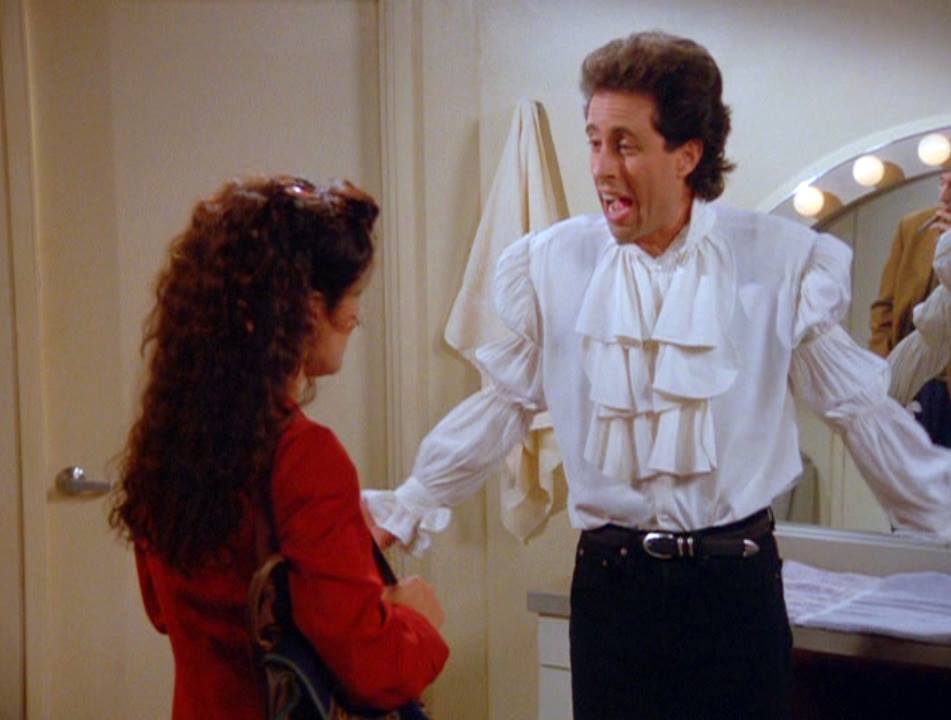 But I don't wanna be a pirate!

George thinks he's made it big when, shortly after moving in with his parents, he gets work as a hand model. Elaine arranges for Jerry to appear on The Today Show to promote a charity benefit. However, when out to dinner with Kramer and his new "low talker" girlfriend, a misunderstanding has Jerry agreeing to wear a ridiculous, pirate-style puffy shirt on TV.

Manager: I only hope you have a little more self-control.
George: You don't have to worry about me. I won a contest.

George: Have you completely lost your mind? Who's dressing you? You look like a complete idiot!

Kramer: (admiring George's hands) Oh, those are nice. Ya know, I never noticed this before. They're smooth, creamy, delicate, yet masculine.

George: Stress is very damaging to the epidermis.

Elaine: (to Jerry) You're all puffed up! You look like the Count of Monte Cristo!

Homeless Guy #1: (wearing the Puffy Shirt) Can you spare a little change for an old buccaneer?

Kramer: This pirate trend that she's come up with, Jerry -- this is gonna be the new look for the 90's. You're gonna be the first pirate!
Jerry: But, I don't wanna to be a pirate!

George: My whole life was ruined because of the puffy shirt.

Estelle: I think you're all a little touched in the head.

Jerry: (to George's mom) I don't know if I feel comfortable handing out baloney sandwiches in the building.

Estelle: Georgie, would you like some Jell-O?
Frank: Why'd you put the bananas in there?
Estelle: George likes the bananas!
Frank: SO LET HIM HAVE BANANAS ON THE SIDE!!!

George: Borrowing money from a friend is like having sex. It just completely changes the relationship.

The puffy shirt from this episode is now part of the collection of the Smithsonian's National Museum of American History.

When the gang see a couple of homeless guys using the puffy shirts, you can hear a woman from the audience (between the laughs) screaming "Oh my god!".

A mini-sized replica of the puffy shirt was included as an extra in the 'Seinfeld Seasons 5&6 DVD gift set', released in November 2005.

The first network appearance of Jerry Stiller as Frank Costanza. Later, for continuity sake in syndication, Jerry Stiller re-shot the scenes featuring his character in the previous season four episode "The Handicap Spot".

The "Today Show" segment was videotaped rather than filmed in order to imitate the live morning show's look.

This is a rare episode in which a scene doesn't take place at Monk's Coffee Shop. They are many episodes without Monk's, but most of those do not take place within New York City.

When George says, "I won a contest," he is referring to the episode, "The Contest."

George says to Kramer that Jerry doesn't even let anyone use his bathroom; however, George uses Jerry's bathroom in many episodes.

When George is eating out with his parents, the point of view over his mother's shoulder shows her holding up the menu, but from George's side her menu is seen lying on the table.

During George's dinner with his parents, when he says, "I'm a college graduate!" he sets down the pepper shaker, which he wasn't holding in the previous shot. Also, the salt shaker moves around between shots.