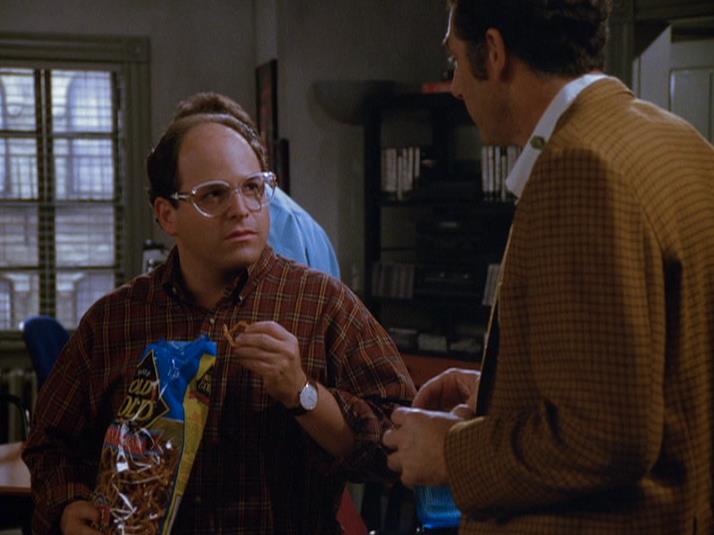 May I have one of those madame?

George's glasses are stolen at the health club. While helping him pick a new pair, Elaine is bitten by a dog and fears she has rabies. Kramer helps George and Jerry get discounts or glasses and an air conditioner. Meanwhile, Jerry suspects his girlfriend is cheating on him with his cousin.

Dwayne: Who said anything about a discount?
Kramer: Ooh, how quickly we forget. You owe me buddy.
Dwayne: For what?
Kramer: (takes out candy bar) Remember this?
Dwayne: What are you doing?
Kramer: Six months ago you were eating four of those for breakfast and chasing it with a Ring Ding! And two Butterfingers on the train. Sound familiar?

Elaine: I've got such a headache. Oh, that's another symptom!
Kramer: Of what?
Jerry: Rabies.
Kramer: Oh that's fatal, you don't want that!
Elaine: I know I don't want it! I don't need you to tell me what I don't want, you stupid, hipster doofus!

(After setting the air conditioner in the open window.)
Kramer: Installed.

Kramer: I think it got the dog!

Jerry: Who picked these out?
George: I did.
Jerry: They're ladies glasses. You know all you need is that little chain around your neck so you can wear them while you're playing Canasta.

George: I was spottin' those raccoons...
Jerry: They were mailboxes, you idiot. I didn't have the heart to tell you.

George: I gotta get out of this city.
Jerry: So you're tunneling to the center of the earth?

Kramer: (to the optometrist) You wouldn't even have any teeth if it wasn't for me taking you over to Joe's Fruit Stand and stuffing cantaloupe down your throat!

Elaine: (looking out Jerry's window) Do you ever spit on anybody from here?

Elaine: Is this going to hurt?
Doctor: Yes, very much.

George: I'm at the health club, and while I'm in the pool, some guy walks off with my glasses. Who steals prescription glasses?
Elaine: You don't have an old pair?
George: I broke 'em playing basketball.
Jerry: He was running from a bee.

Kramer: Retail is for suckers.

Jerry: (to George) We're behind you, AquaBoy! God speed!

Kramer: (to George) May I have one of those, Madam?

This is the second episode in which Jerry's green bike is blue and silver. In the next episode and onward it's green again.

This is the second episode where Kramer mentions his friend Bob Saccamano. The first was in season three's "The Heart Attack".

The credits display "In Memory of our Friend John Oteri". John was one of the production assistants on the previous seasons.

On the Season 5 DVD, there is a deleted scene in which Amy is actually making out with Jerry's cousin Jeffrey.

Rance Howard (Ron Howard's father) who plays the blind man in this episode returns in Season 7 as the farmer in "The Bottle Deposit (2)".

Jerry says that he is getting a "Commando 8" air conditioner. The "Commando" name would be recycled in a later episode when Kramer gets a "Commando 5000" shower head.

The scene where George spots a dime on the far side of Jerry's apartment is an allusion to a scene in "The Great Escape" where "The Forger" (Donald Pleasence) is nearly blind, so he stages a deception wherein he spots and then picks up a pin to prove he can see well enough to participate in the escape.

When Elaine is peeling the orange it goes from about one-third peeled to completely peeled in a matter of seconds.