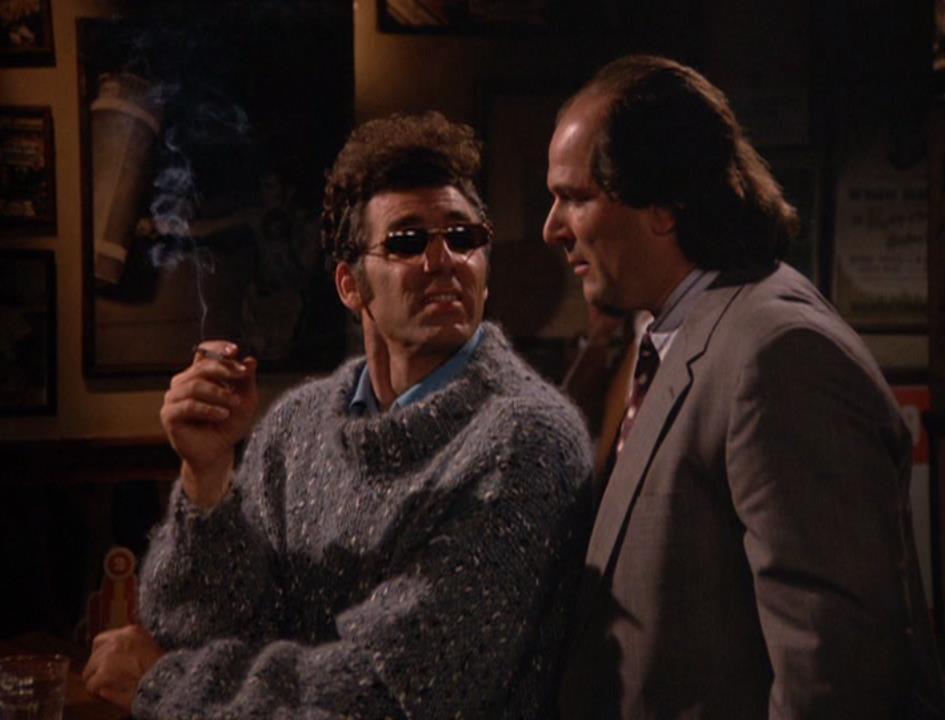 I'm hip. To the whole scene.

George's father gets him an interview as a bra salesman. Evidence points to Jerry's accountant being a drug user. So Jerry, Kramer and Newman set out to find out the truth. Elaine's new boyfriend is perfect except for his use of an exclamation point.

Kramer: Did he use any slang? Did he say 'man' a lot? What about when he was leaving? Did he say, 'I'm splittin'?

George: I got it. Cups in the front, loops in the back.

Jerry: You know, I thought I'd heard of everything. I've never heard of a relationship being affected by punctuation.

Elaine: So, because of a few bad seeds, you're going to impugn an entire continent?
Jerry: Yes, I'm impugning a continent.

Kramer: Not to mention the picture of him on the toilet.
(Jerry leaves the apartment, closes the door, realizes what Kramer said and comes back inside)
Jerry: The what?

George: Jerry, where'd you get that sweater?
Jerry: What do you think? I found it in the back of my closet.
George: I think that's what the back of closets are for.

Frank: (lecturing George about bras) You know about the cup sizes and all? They have different cups.

Kramer: Here's to feeling good all the time.

Elaine: (to George) Ask your mother. You live with her now, don't you?

Jerry: 'Dear Barry. Consider this letter to be official termination of our relationship effective immediately.'
Kramer: Exclamation point!!
Jerry: 'I will expect all funds in form of cashier checks no later than the 18th'.
Kramer: Double exclamation point!!!

When Kramer is in the bar with Barry, Jerry's stand-in is Mitch the bartender, Julia's stand-in is the waitress that hits Kramer when entering, and Michael Richards' stand-in can be seen sitting at the opposite end of the bar.

This is one of Michael Richards' favorite episodes.

The scene where Kramer was drinking and smoking at the same time, required two takes to get right. In the first attempt, Michael Richards shouted.

On the Season Five DVD, Jerry explains that "The Sniffing Accountant" was inspired by an experience in his own life. He trusted his accountant at the time enough to give him $50,000 in cash without a receipt, and that the accountant, "snorted it up his nose". Jerry goes on to say that this episode is "...some measure of revenge".

The woman at the mailbox, whose material Newman feels, is the same woman that worked with George Costanza, and whose wig he threatened to take off in Season 2's "The Revenge".

As Frank and Estelle are chastising George for "feeling a woman's material", he is seated on the couch reading a Glamour magazine. This is a reference to "The Contest" when Estelle walks in while George is "reading" Glamour.

In Jerry's apartment when they discuss the sweater being made of mohair, the shadow of the boom mic is visible on the lampshade behind Elaine.