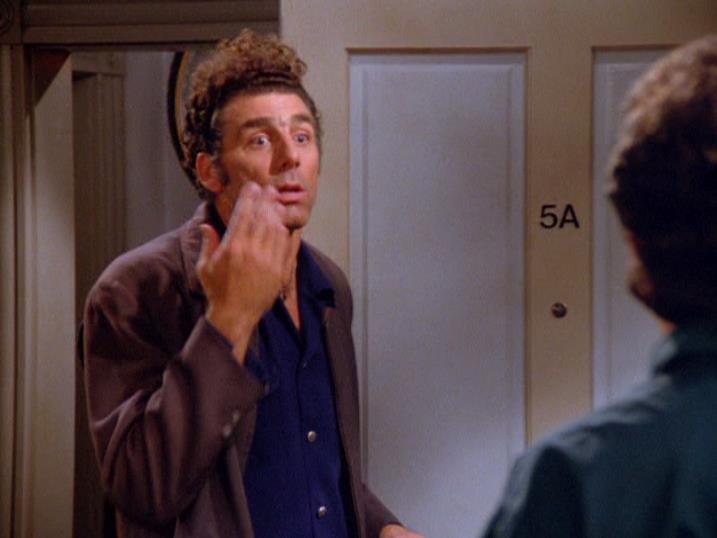 Don't ever go against the family, Jerry.

Elaine and Jerry are nervous about the religious duties they must do when they agree to become godparents to a couple's newborn. George is overjoyed by getting a great parking spot...until a man jumps off the building and onto his car. Meanwhile, Kramer thinks that he has stumbled upon the secret product of government genetic engineering - a "pig man".

Kramer: (about the Bris) Hey, we're not talking about a manicure. Imagine, this is gonna be his first memory of his parents, just standing there while some stranger cuts off a piece of his manhood and then serves a catered lunch!

Mohel: Hello, hello, I'm the mohel. It's very nice to meet you all...
(A pan clangs to the ground. The Mohel snaps.)
Mohel: Oh! What was that?!? Jeez. Scared the hell out of me. My god. I almost had a heart attack!

Jerry: How about our little Elaine... Attending the finest finishing schools on the eastern seaboard, equestrian competitions, debutante balls... Look at her now - interviewing mohels.

Mohel: Cows don't have families. You make a mistake with a cow, you move on with your life.

George: So, any word from the Pigman?
Kramer: No!
George: And he's not a Pigman, is he?
Kramer: Nooo, just a fat little mental patient!

George: Jerry, you have to see this! I pulled the car in perfectly equidistant from the car in front and the car behind!

Mohel: (to Elaine) Darling, you see where that glass is? You see how that glass is near the edge of the table? You got the whole table there to put the glass; why you chose the absolute edge, so half the glass is hanging off the table? You breathe and that glass falls over, and then you've got broken glass on the carpet, embedded in the carpet fibers, deep, deep in the shag. Broken glass, bits of broken glass you can never get out. You can't get it out with a vacuum cleaner. Even on your hands and knees with a magnifying glass, you never get all the pieces. And then you think you got it all, and then one day two years later, you're walking barefoot and you step on a piece of broken glass and you kill yourself! Is that what you want? I don't think that's what you want, is it? Do you? Huh?

Elaine: Did you find the place alright?
Mohel: Did I find it alright? Could you send me to a more dangerous neighborhood? I'm dreading walking back to the subway, someone shouldn't smack me over the head and steal my bag! Because I'll be lying there and people will spit on me and empty my pockets. I'll be lying in the gutter like a bum, like a dog, like a mutt, like a mongrel, like an animal! God forbid anybody should help me, or call an ambulance. Oh no, that's too much trouble, to pick up a phone and press a few buttons. Ahh! What's the point?

Mohel: (with increasing tension) Is the baby gonna cry like that? Is that how the baby cries, with the loud, sustained, squealing cry? 'Cause that could pose a problem. Do you have any control over your child? 'Cause this is the time to exercise it, when the baby is crying in that high-pitched, squealing tone that can drive you insane!!!

George: (about the suicide on his car) The guy swan-dives from twenty floors. Had to land right on my roof. I mean, what have I got, a bullseye up there? He couldn't move over two feet?! Land on the sidewalk, it's city property!!!

Kramer: (about the Bris) It's a barbaric ritual.
Jerry: It's tradition.
Kramer: Well, we used to sacrifice virgins to appease the Gods, but we don't do that anymore.
Jerry: Maybe we should.

George: You know, I wish there were Pigmen. You get a bunch of these Pigmen walking around, suddenly I'm looking a lot better. So when someone sets me up they could say, well at least he's no Pigman.

Kramer: Somewhere in this hospital, the anguished oink of Pigman cries out for help!
Jerry: If I hear an anguished oink, I'm out of here.

George: Well, I just got the estimate. It's going to cost more to fix that roof than the car's worth. So I'm going over to see that hospital administrator today. Someone is gonna pay for this damage and it's not gonna be me!
Jerry: Ah, you're screwed.
George: I know.

Kramer: Hey, I'm telling you, the pig-man is alive. The government has been experimenting with pig-men since the 50's.

Jerry: I've never had stitches! I'll be deformed. I can't live with that. It goes against my whole personality. It's just not me!

The incident of discovering a pig man is likely a reference to the British film "O Lucky Man!" where Malcolm McDowell discovers a Pig Man in a hospital bed. In addition, the scene where Kramer "steals" the pig man is a reference to "The Godfather", where Michael Corleone "steals" his father, Vito, in a similar scene.

The ending with Kramer being called "Godfather" and the shot of Jerry, Elaine, and George looking nervous as the door closes are also a references to "The Godfather", as is Jerry saying "Look what they did to my boy" as he looks at his cut finger.

The episode starts with Jerry doing stand-up, and you can see he is wearing a bandage on his finger, which we find out later is from his finger being cut by the mohel.

Season 5 episodes "The Mango" through "The Sniffling Accountant" saw Jerry's green Klein bike replaced by a blue Cannondale. In this episode, the green Klein returns.

This episode received an Emmy nomination in 1994 for Outstanding Individual Achievement in Sound Mixing for a Comedy Series or a Special.

When Jerry goes to the hospital to get his finger stitched, Elaine's vest is missing a button through half of the scene, and then it is suddenly buttoned all the way up.

Jerry imitates two lines of "The Godfather" in Marlon Brando's voice, but both the lines were originally done by Al Pacino.

When George is driving the gang to the hospital, the gearshift lever of his car is clearly in "Park" the entire time.