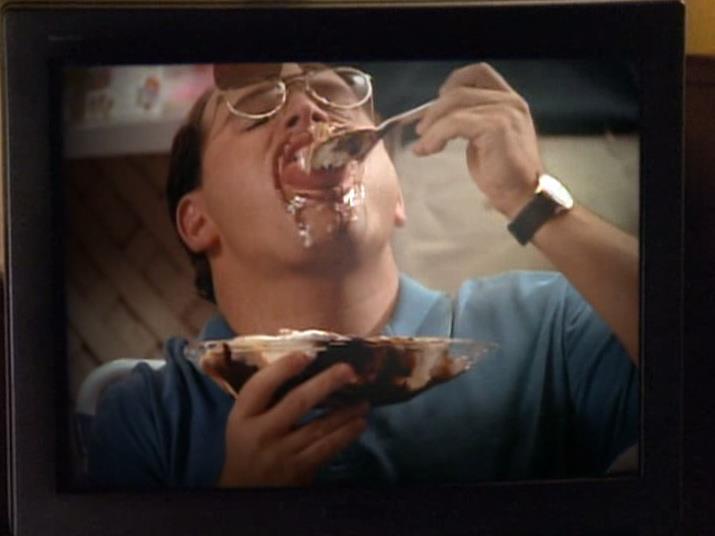 Boy I bet you that guy can cover a lot of court. Hey buddy, they got a new invention. It's called a napkin.

Jerry is smitten with a line judge at the US Open, but after he gets her attention, he finds out she is deaf. Elaine has a problem not communicating with a limo driver. George wants to use Jerry's girlfriend to read the lips of his ex-girlfriend to find out what she is saying about him. While she is reading the lips, Kramer does the translation, that gets George in more trouble. Kramer becomes a ball man at the Open, when Monica Seles returns to tennis.

Jerry: So she sees you with hot fudge on your face and she ends it? Do you really think she'd be that superficial?
George: Why not? I would be.

Newman: (to Jerry) Alright... alright, you go ahead... You go ahead, you keep your secret... But you remember this: when you control the mail, you control... information.

Elaine: Yah, and when I see freaks in the street, I never, ever stare at them and yet I'm careful not to look away, cause I want to make the freaks feel comfortable.

Jerry: (to Laura) How about six? Six is good. You got a problem with six?

Jerry: (to Kramer) You want to be a ball man? Go ahead and break the ball barrier.

Jerry: Oh, well. What are you, deaf?
Laura: Bingo!

Ball Boy: Hey pops, isn't there a better way to spend your twilight years?
Kramer: I may be old, but I'm spry.

Monica Seles was approached to appear in the final scene where Kramer runs into her on the tennis court. Seles turned down the offer and a stuntwoman was used instead.

The original script said that Jerry and George were to mumble their lines in front of Laura at the restaurant. Jerry Seinfeld and Jason Alexander decided it would be better to place objects in front of their face to hide their lips.

Marlee Matlin was nominated for the 1994 Emmy Award for Outstanding Guest Actress in a Comedy Series for playing "Laura" in this episode.

When George is on TV eating the ice cream, Larry David can be heard as the voice of the second announcer saying, "Hey buddy they've got a new invention, it's called a napkin."

Larry David can be heard as the voice of the dispatcher telling the limo driver he's to pick up Tom Hanks.

Continuity problems! The episode starts on what is said to be Friday (according to Elaine's co-worker). Then it's Saturday (with Jerry, George, and Laura at the restaurant). The next day is Todd's party, which is said to take place on a Friday.

When Kramer gets to be the "ballman" the show him crouching right next to the net. However,when they pan out to show the entire court he is not seen by the net. Of course, it was stock footage of a tennis match... but we wanted to point it out anyway.

When George is trying to get Jerry's attention at the tennis match, he first has his hinged sunglasses shades up, but in the next cut they are suddenly down.

After Kramer runs into Monica Seles, Laura's hands are in the air. In the close up shot, her hands are on her head.