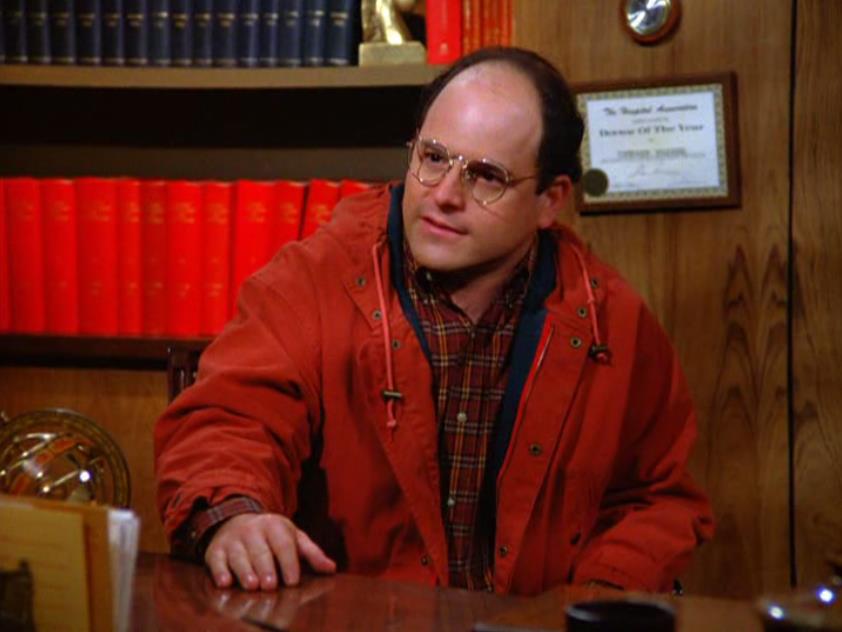 Faking?! What makes you think that I have time to see doctors, take x-rays, make appointments when there's absolutely nothing wrong with me? What kind of a person would do a thing like that?!

When they begin to gain weight, Jerry and Elaine suspect that Kramer has made a bad investment in a non-fat yogurt shop. Jerry inadvertently uses the "F" word, as a result so does Maryedith's son Matthew, a lot. George meets an old childhood friend whom he is convinced is trying to humiliate him. Elaine begins dating this friend and gives him an idea for his mayoral candidate's campaign. Kramer's date with a lab technician results in strange test results for the future mayor of New York City.

Jerry: (on the yogurt, within Matthew's earshot) This is so f***ing good!

Jerry: Cursing isn't something comedians usually do.
Matthew: But you did it.

Kramer: Hey, I'll tell you what, chubbs, if that yogurt has fat in it, I will put myself on an all-yogurt diet for a week.
Jerry: Well, let's start the insanity.
Kramer: Mmmmmm... giddyup!

Newman: (joking with fellow postal workers) Well, I wouldn't hear of it. I said 'Nice try, Granny,' and I sent her to the back of the line.

Elaine: What if we become a couple, George? Every time we see you you're going to be walking around going like this? (twitches arm) Even you can't keep that up.
Jerry: No, I believe he can.
Elaine: Where's your bathroom scale?!
(Jerry rolls his eyes.)

Jerry: Ah, Mary, we've been eating a lot of your husband's yogurt at the yogurt place. Does that have any fat in it?
Mary: No *beep*ing way!

Matthew: (to Jerry) Thanks for ruining my daddy's business, you fat *beep*!

Frank: (to Lloyd) You discussed George with the Mayor of New York?!?

Elaine: (on Lloyd) We went to his apartment, and I sat on one of his chairs and it broke. And he says, "Boy, you're a lotta woman!"

George: "Faking?" What makes you think that I have time to see doctors, take X-rays, make appointments, when there's absolutely nothing wrong with me? What kind of a person would do a thing like that?
Doctor: I don't know what kind of a person would do something like that. Obviously a very sick person. A very immature person. A person who has no regard for wasting other people's valuable time.

Elaine: You know what I would do if I was running for mayor? One of my campaign themes would be that everybody should wear nametags all the time to make the city friendlier.

George: Lloyd doesn't know what he's up against. (twitches arm) This is nothing to me. My whole life is a lie.

Since the episode was to air days after the 1993 New York City mayoral election two versions of the final scene were filmed. One scene showed David Dinkins had won and the other scene had Rudy Giuliani as the winner. When Giuliani was officially announced the winner, he filmed the cameo scene the next morning, which was then edited into the episode roughly one day before broadcast. Incidentally, actor Phil Morris (Jackie Chiles) played the role of Dinkins' press secretary, and if it had been shown, Morris likely would not have been able to play the Jackie Chiles character.

There was a deleted scene in the yoghurt shop with Lloyd Braun defending his name tag idea and telling George to stop faking the arm movement. In fact, when Newman walks out saying, "I can't eat this!," the man next to him viewed only from behind is actually Lloyd Braun.

In this episode Peter Keleghan plays Lloyd Braun. However, in later episodes he is played by Matt McCoy.

When Jerry says, "You know who I saw wilding today? Herb!" he is referring to "wilding" a nickname given to violent acts perpetrated by teens In Central Park during the 1980s.