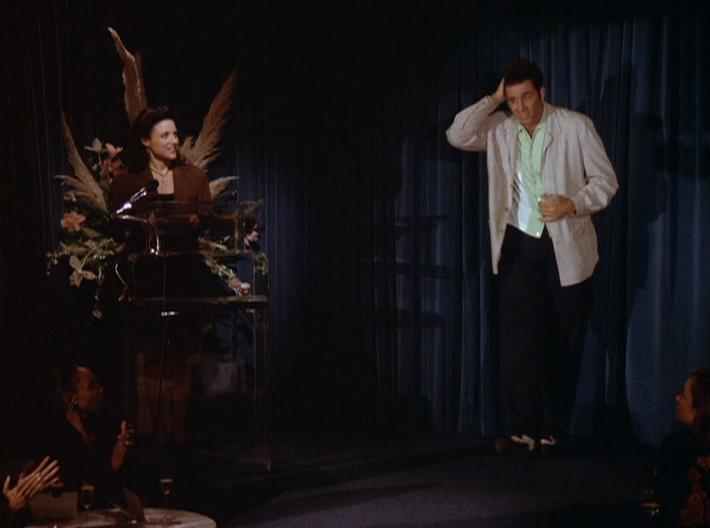 George is uncertain about whether his job interview was successful or not, so he decides to go into the office and act like an employee while the boss is on vacation. Jerry is reluctant to dump his old barber even when he is given a real bad haircut. Kramer arranges to get him a clandestine haircut at the apartment of his barber. Newman is charged by Jerry's barber to get a sample of Jerry's hair when he suspects foul play.

Newman: I almost went to barber school. I always felt I had a talent for it.

George: Well, a lot of people consider me small and prestigious.

Secretary: (through intercom): Mr. Costanza, Mr. Pensky is here to see you.
George: (nervously) Mr. Pensky? Of the Pensky file?

Jerry: So what do you do there all day?
George: They gave me the Pensky file.

Jerry: In the one minute he worked on me, I could tell he was really good.

Kramer: (talking to Newman on Jerry's phone) So, when are you gonna be able to go out?
Newman: (with a shaved head) Not for a while.

Elaine: (auctioning off Kramer) He likes fruit, and uh, he just got a haircut.

George: In college they used to call me 'The Little Bulldog'.

Newman: Can I use your bathroom?
Jerry: What's wrong with yours?
Newman: My toilet's clogged.
Jerry: You can't unclog it?
Newman: No.
Jerry: Did you ask Kramer?
Newman: He's out.
Jerry: Number one?
Newman: Yes, yes. Can I go? Cause I gotta go very badly.
Jerry: All right. Flush twice.

Kramer: I could raise enough money to cure polio.

Jerry: I want you to have this job. Of course, sodomy is a pre-requisite.

George: What's the worst thing that could happen?
Jerry: Well, you'd be embarrassed and humiliated in front of a large group of people and have to walk out in shame with your tail between your legs.
George: Yeah, so?

You can hear someone in the audience yelling "Oh no!" when George is told Mr. Pensky is there to see him.

The music in the background for many of the scenes in this episode is from Rossini's opera "The Barber of Seville".

Enzo's barber shop as seen from the outside bears little resemblance to the studio set. In particular the lettering on the window is missing.