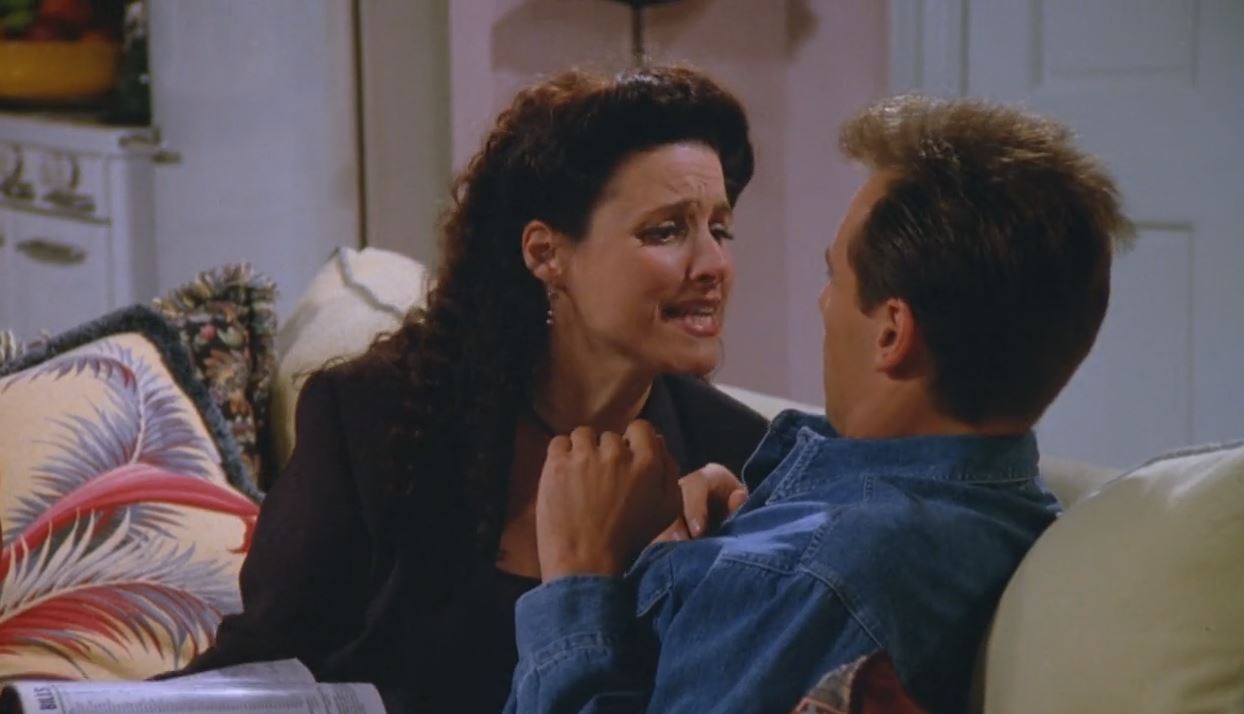 O.J. Rifkin! You don't even use a name, it's just initials. Oh please please please change your name to O.J.! Please, it would be so great!

Elaine meets a man who's perfect except his name is the same as a notorious serial killer. Jerry is frustrated when he can't get his girlfriend, who's a masseuse, to give him a massage, even Kramer is a customer. George is obsessed when Jerry's girlfriend doesn't like him, so he tries extra hard to get her to like him, much to his own girlfriend's dismay.

Kramer: (after getting a massage) Hey! I am looser than creamed corn.

Jerry: It's like going to Idaho and eating carrots. I like carrots, but I'm in Idaho... I want a potato.

Joel: Remy Rifkin? Should I get a beret?
Elaine: Oh, Stuart's a lot better! (baby-talk) Little Stuart Rifkin likes to go shopping with his mother!

Jerry: (monologue) If there's a serial killer loose in your neighborhood, it seems like the safest thing is to be the neighbor. They never kill the neighbor. The neighbor always survives to do the interview afterwards, right? "Oh, he was kind of quiet." I love these neighbors. They're never disturbed by the sounds of murdering, just stereo. Chain saws, people screaming, fine. Just keep the music down.

Elaine: Jerry, she gives massages all day. She doesn't want to give them on dates.
Jerry: (disgusted) Yeah, I know, she just wants to have sex...

Jerry: (about George) He likes a date to see him with a friend so she can get a window into his non-date personality.
Elaine: I've looked through that window and screamed at him to shut the blinds.

George: She stayed over?
Jerry: (disappointed) Yeah.
George: The sex wasn't so good?
Jerry: (unenthusiastic) No. The sex was fabulous.
George: So?
Jerry: I want the massage!

Elaine: Hey, how many people did Rifkin strangle? Eighteen?
Jerry: Yeah. Eighteen strangles.
Kramer: You know why Rifkin was a serial killer? Because he was adopted. Just like Son of Sam was adopted. So apparently adoption leads to serial killing.

Kramer: What about my massage?!
Jerry: Ask Newman.

Jerry: You're a massage teaser!

George: Jerry, this woman hates me so much. I'm starting to like her.
Jerry: What?
George: She just dislikes me so much--it's irresistable.

Kramer: (after Jerry orders him to stay away from his girlfriend) Wait a minute! I need my massages! Can't you see I'm burned out?

When Elaine gets the idea of trying to get her boyfriend to change his name, she comes up with names while flipping through Sports Illustrated. One of the names she suggests is "O.J.". This episode aired about nine months before O.J. Simpson was arrested for killing his ex-wife and her friend.

In this episode Jerry calls George a "bad seed". Elaine will later refer to George as "a bad seed" again in "The Little Kicks."