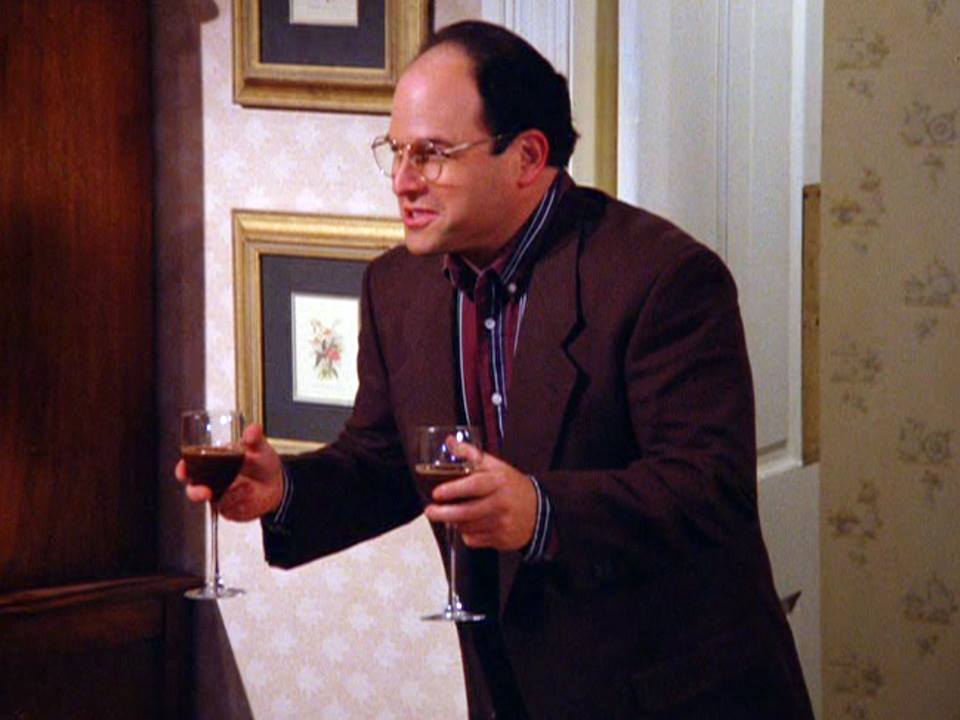 I hope prune juice is all right.

Jerry helps George out with a coffee table stain and makes Elaine take the subway home and gives her Mr. Costanza's TV Guide to read. While on the train, Elaine meets a strange man obsessed with television. George meets a woman at a refinishing store who he brings back to his parent's home and passes it off as his. A female Native American that he is interested in thinks Jerry is racially insensitive when he presents Elaine with a cigar-store Indian as a peace offering. George gets grounded when his parents return from vacation and find a prophylactic wrapper in their bed and a missing TV Guide. Kramer has an idea for a coffee table book on coffee tables that Elaine doesn't like but Mr. Lippman does.

Kramer: (selling his coffee table book idea) And on the cover is a built-in coaster.

Jerry: You can't give something and take it back that makes you an.....
Winona: A what? An indian giver?
Jerry: I'm not familiar with that term!

Frank: That's it! You're grounded!

Frank: (to George) What is this? A prophylactic rubber?
Estelle: What is this doing on my bed?

George: We're collectors. We see objects of great beauty and we must have them.

Jerry: (Complaining about the Chinese mailman's reaction) When someone asks me which way is Israel, I don't fly off the handle!

George: I hope prune juice is alright. It's the only thing I had that was chilled.
Sylvia: Fine.
George: I'm sorry about that lock on the liquor cabinet. The combination must have just flown out of my head. It's a mental block.
Sylvia: (regarding photo) Ahh! Is this your son in the bubble bath?
George: ...No, that's me.

Ricky: (to Elaine) You look scrumptious!

Jerry: Ya know, I don't get it. I'm not allowed to ask a Chinese person where a Chinese restaurant is? I mean, aren't we all getting a little too sensitive? I mean, somebody asks me which way is Israel, I don't fly off the handle.

Frank: How do you just walk into a house and take a TV Guide? How does she expect you to watch TV? Am I just supposed to turn it on and wander aimlessly around the dial?

It is in this episode that Kramer first comes up with the idea for a "coffee table book about coffee tables."

When cutting up the TV Guide, Ricky hums the theme song from the "I Love Lucy".

Kramer picks up the bowling ball from Elaine's apartment after missing the train; however, Elaine was not carrying the bag when she got off the train.

The taxi Kramer is riding when he shows Jerry the wooden Indian has a California license plate.