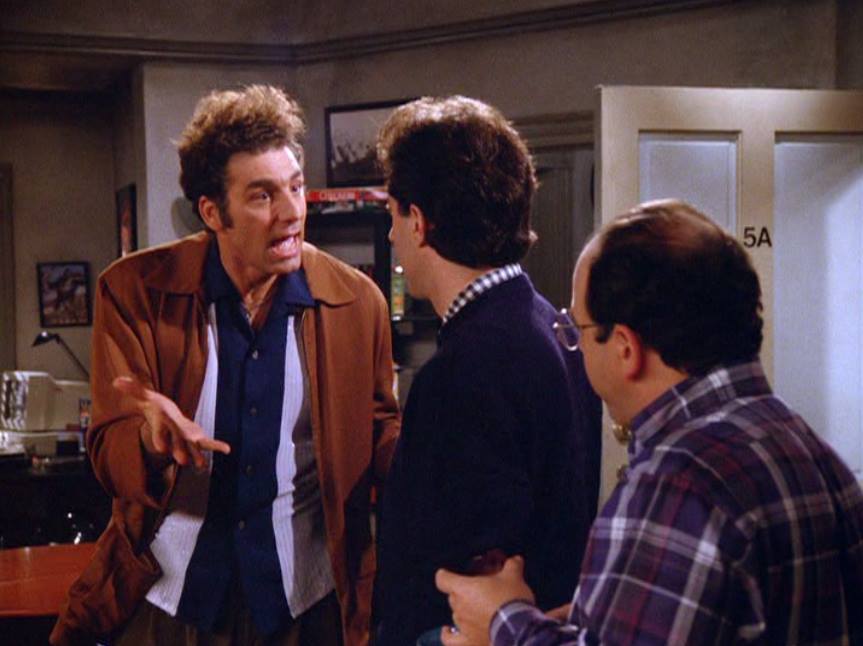 Jerry, I'm tellin' ya, I have this power. And I have no control over it.

George changes his religion to Latvian Orthodox to keep his girlfriend who must break up with him for religious reasons. Jerry finds a tube of fungus cream in his girlfriend's medicine cabinet and fakes an illness until he can figure out what the cream is used for. He asks Elaine to ask her current boyfriend who's a podiatrist. Kramer meets a sister at George's new church who becomes infatuated with him.

Priest: What aspect of the faith do you find particularly attractive?
George: I think the hats.

Jerry: Fungicide! So what could she have?
Elaine: I don't know.
Kramer: Fungus.
Jerry: Exactly.

Jerry: (to George, who is thinking of converting to Latvian Orthodox) You know, it's not like changing toothpaste.

Estelle: Latvian Orthodox? Why are you doing this?
George: For a woman.
Frank: A woman! What are you out of your mind?
Estelle: Why can't you do anything like a normal person?
Frank: Wait. Is this the group that goes around mutilating squirrels?

Kramer: I always open medicine cabinets.
Elaine: I trust people not to do that.
Kramer: Big mistake!

It's revealed that both Jerry and George are left-handed.

George writes on his hand in order to cheat on his conversion test. When he holds up his hand in the priest's office, you can see the notes on his palm.

Episode writer Bruce Kirschbaum thought he was making up a religion. Later, he learned that Latvian Orthodox is a real religion.

When Jerry washes his the sound of running water is heard, but no water comes out of the tap.

After Jerry drops the tube of fungicide in Elaine's purse, the tube is again shown to be in Jerry's hands.

When Elaine cuts her boyfriend a slice of cake, she places it on the plate on its side. Later, it moves to being upright.

When Jerry and Elaine are eating the lobster, their forks change position between shots inconsistently with their eating.