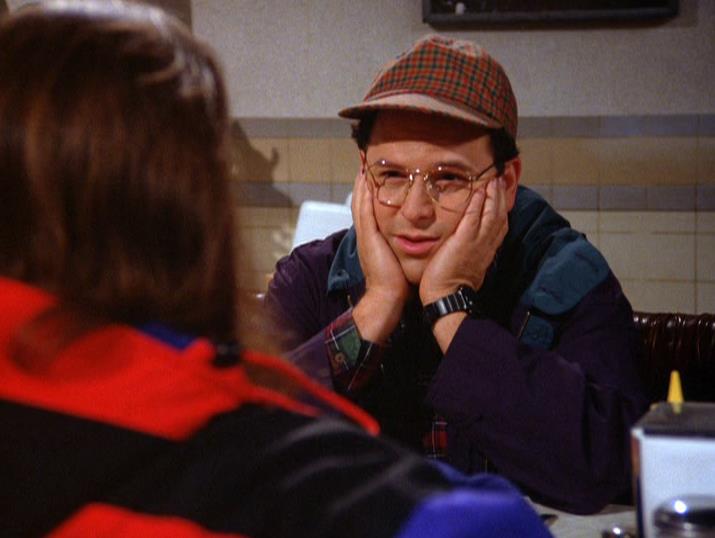 You know, I think George has a non-sexual crush on him.

While in a bathroom stall, Elaine needs some toilet paper, but the woman in the next stall refuses to give her a piece. The woman is Jerry's girlfriend whose voice Kramer recognizes from a telephone sex line. Elaine's boyfriend, whose face she just loves, takes George & Kramer rock climbing. After his accident, Elaine isn't sure his face will be the same.

Jerry: You're crazy.
Kramer: Am I? Or am I so sane that you just blew your mind?
Jerry: It's impossible.
Kramer: Is it? Or is it so possible that your head is spinning like a top?
Jerry: It can't be.
Kramer: Can't it? Or is your entire world crashing down all around you?

Jerry: (in reference to The Masseuse episode) Ahh, I've been waiting a while for this.

Jerry: (eating popcorn) Mmm... I love this artificial flavoring. I like it better than butter. I think it's more consistent.

George: It's a different world when you're with a cool guy.

Jerry: (about Tony) George is like a schoolgirl around him.

Jerry: (reacting to Jane's bad experience in the bathroom) Who does she think she is? How dare she! You want me to get the manager? Too bad they don't have those old ladies walking around with the flashlights anymore... flush her out.

George: (trying to be cool with Tony) I am down. I am totally down. Mark me down.

Kramer: (about Tony) Now I think that you're in love with him.
George: What? That's ridiculous.
Kramer: No, no. I don't think so. You love him.
George: You better be careful on those rocks tomorrow, buddy. And you're not getting any sandwiches either!

Jane/Elaine: I can't spare a square. I don't have a square to spare.

This episode gives us the only look at the bathroom in Monk's Coffee Shop.

This is the first of only two episodes in which Jerry can be seen using his computer. The second is the season nine episode, "The Strongbox".

In this episode, Kramer refers to "Monks" by name. Usually they just say, "the coffee shop".

During the climbing scene, when Kramer and George bump against the rock face, the sounds heard indicate hollow material.