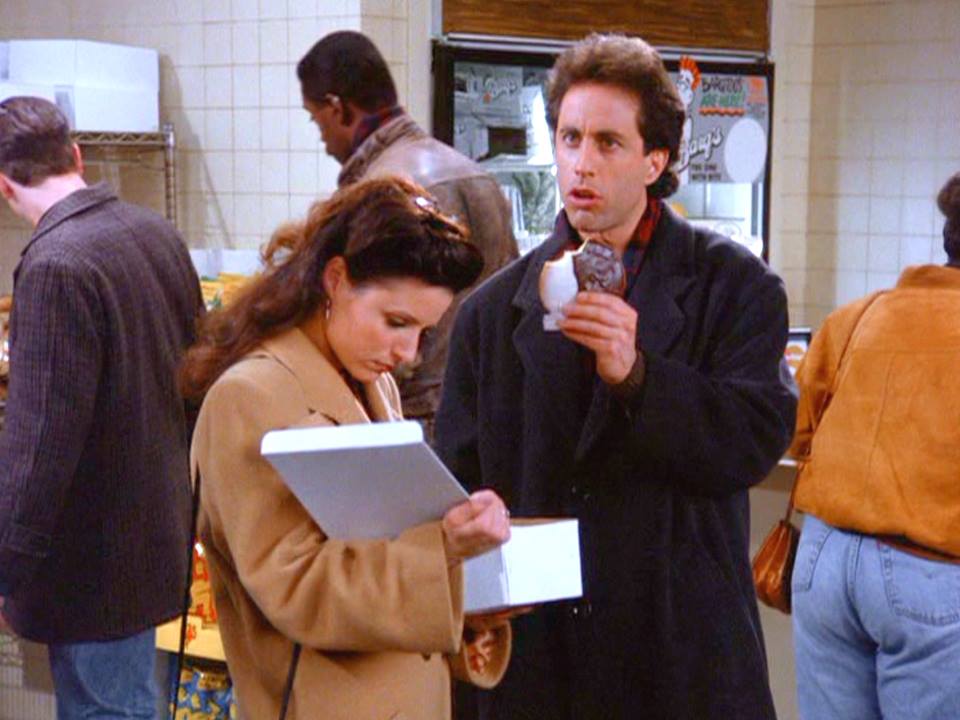 The gang struggles to find gifts for a dinner party. Jerry and Elaine stop at a bakery to get a cake, but they forget to take a number and lose the chocolate pastry and the one they get has a hair on it. Kramer and George try to get the wine but must get change for a $100 dollar bill and wait for a double-parker to return to his car.

George: (talking about Elaine) I'm a little scared of her.

(The bakery clerk is coughing horribly)
Jerry: Oh, that's lovely. That's what you wanna see, yeah. Yeah, you wanna trade your hair for some phlegm. Yeah, that's a good deal, you win the pennant with that trade. Hair for phlegm.

Kramer: All right, let's go. Who's driving?
Jerry: You are, I can't get that thing in my car. (referring to George)

Elaine: You know, I was just thinking, the four of us can't show up with just one bottle of wine.
George: Oh, here we go.
Elaine: What?
George: Why don't we get them a couch?
(Kramer starts laughing)
George: We'll rent a U-Haul. We'll bring them a nice sectional.

Jerry: My stomach. I think it was that cookie.
Elaine: The black and white?
Jerry: Yeah.
Elaine: Not getting along?
Jerry: I think I got David Duke and Farrakhan down there.

Kramer: Hey, anybody got change for a hundred?!
George: Are you crazy?! What are you doing?! You're gonna get us killed!
Kramer: What?
George: Don't go shouting we got a hundred dollar bill. People will be jumping out of windows on top of us.
Kramer: All right, let's go buy something and we'll get some change.
George: I am not buying something just to get change.
Kramer: George, there's a news stand right over there. Now, come on.

Elaine: You know, I often wonder what you'll be like when you're senile.
Jerry: I'm looking forward to it.
Elaine: Yeah, I think it'll be a smooth transition for you.
Jerry: Thank you.

(In Kramer's car)
Kramer: (Shouting out the window) HEY, YOUR LIGHTS ARE ON!
George: It's a funeral procession.

Kramer: (referring to George's coat) You better be careful with that thing. You'll start a war.

Kramer: (on Penthouse Forum) Hey, did you ever read one of these?
George: It's not real. They're all made up.
Kramer: Oh, it's real.
George: (sarcastic) You know there is an unusual number of people in this country having sex with AMPUTEES!!
Jerry: We've got to get the cinnamon.
Elaine: No, but they got the chocolate. We'll be going in with a lesser babka.
Jerry: I beg your pardon? Cinnamon takes a back seat to no babka. People love cinnamon. It should be on tables at restaurants along with salt and pepper. Anytime anyone says, "Oh, this is so good. What's in it?," the answer invariably comes back, cinnamon. Cinnamon, again and again. Lesser babka? I think not.
Jerry: What are we going to do now? If we can't get the babka the whole thing's useless.
Elaine: Well, how about a carrot cake?
Jerry: Carrot cake? Now why is that a cake? You don't make carrots into a cake. I'm sorry.
Elaine: Black Forest?
Jerry: Black Forest? Too scary. You're in the forest, oohh. How about a Napoleon?
Elaine: Napoleon? Who's he to have a cake? He was a ruthless war monger. Might as well get Mengele.

Jerry: The key to eating a black and white cookie is you want to get some black and some white in each bite. Nothing mixes better than vanilla and chocolate. And yet, still, somehow racial harmony eludes us. If people would only look to the cookie. All our problems would be solved.

Jerry: (to George) You're pretty comfortable up there, huh Bubble Boy?

(A man and woman walk toward the double parked car)
George: Oh, hey, hey, hey! That's great! That's very nice! You know, we've been waiting twenty minutes for you people! What do you think, you're Mussolini?!
Man: Back off, Puff Ball, it's not my car!
(Shoving George's shoulder, the man turns and walks away)
George: I wasn't talking to you.

George: All right we got the wine. Aren't we lucky? We got wine. Whoop dee Whoop! Imagine if we didn't bring the wine... We'd be shunned by society. Outcasts! "WHERE'S YOUR WINE? GET OUT!"

Clerk: Can I get you anything else?
Jerry: Oh, no thanks.
Clerk: How about a nice box of "scram"?

George: I show up with Ring Dings and Pepsi, I become the biggest hit of the party. People would be coming up to me, "Just between you and me, I'm really excited about the Ring Dings and the Pepsi." What are we, Europeans with the Beaujolais and Chardonnay...

George: It's Gore-tex. You know about Gore-tex?
Jerry: You like saying 'Gore-tex', don't you?

Kramer: All right, look, I'm gonna have to pay you back later. I don't have my wallet.
(George swaggers over to Kramer)
George: Why not?
Kramer: Because I don't like to carry my wallet. My osteopath says that it's bad for my spine. It throws my hips off kilter.
(He makes a motion with his hips)
George: "Throws your hips off kilter." So where's your money?
Kramer: I never take it.
George: So what do you do?
Kramer: Oh, I get by.

Elaine: You sold us a hair with a cake around it.

Elaine: These people invited us for dinner. We have to bring something.
George: Why?
Elaine: Because it's rude otherwise.
George: You mean just going there because I'm invited, that's rude.
Elaine: Yes.
George: So, you're telling me, instead of them being happy to see me, they're gonna be upset because I didn't bring anything. You see what I'm saying?
Jerry: The fabric of society's very complex, George.

(after Jerry throws up)
Elaine: How was it?
Jerry: Good as it gets.

The actor who played "Saddam Hussein" had a thick accent and his lines were deemed incomprehensible. His voice was then dubbed over by Larry David, putting on an English accent. The original actor had asked Kramer and George for directions.

In the Season 3 "The Dog," George and Elaine made fun of the way Jerry throws up. However, in this episode, Jerry reveals that he hasn't thrown up in 14 years.

While Jerry is eating the black and white cookie, the chocolate part is on the left and the vanilla on the right, with Jerry eating it from the top. In the next shot however, the vanilla and chocolate have switched places, yet the bites have still been taken out of the top.

The back-projection rear-window view when Kramer is driving George through New York has a repeat: the same corner is shown with the same parked car and the same mother and child crossing.

When George and Kramer are in the liquor store, we see beer for sale. Unfortunately, liquor stores in New York are not allowed to sell beer.

The newsstand has the magazine five different issues of the same magazine, "Entertainment", on sale. This seems unusual.

Jerry takes his gloves off twice when they enter the store.