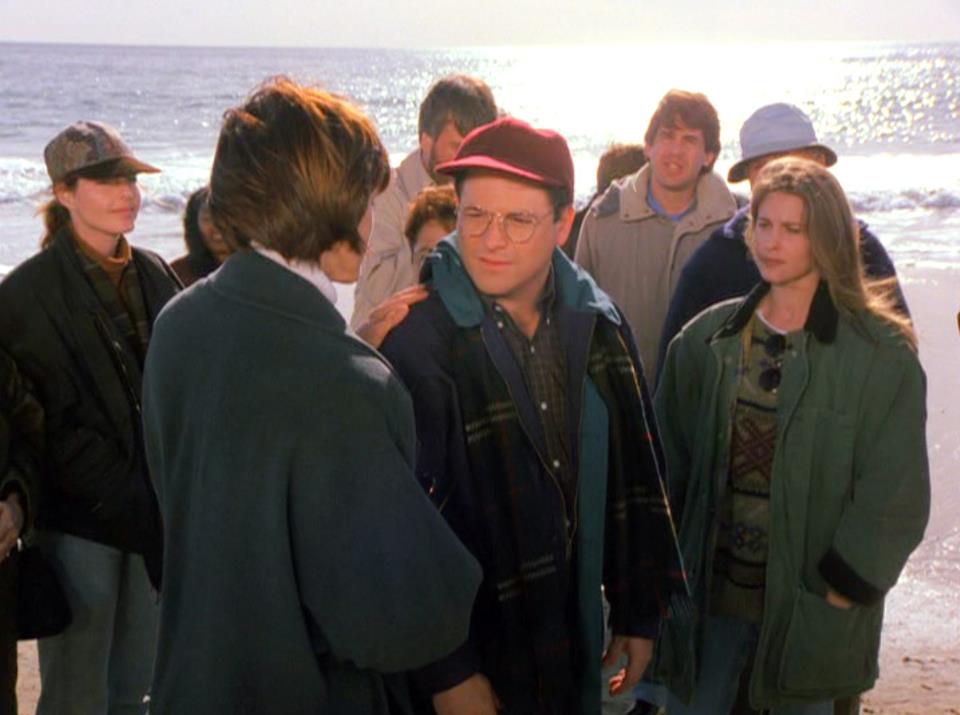 Save the whale George... for me.

Jerry meets an old college classmate who asked about George, whom Jerry says is now a "marine biologist." An infuriated Russian writer tosses an electronic organizer belonging to Elaine out of a limousine that hits a passerby on the head. Kramer struggles with his golf swing and sand. While walking along the beach, George is called on to use his marine biology skills to save a whale.

Elaine: What, are you in a bad mood?
Jerry: I got my laundry back.
Elaine: Golden Boy?
Jerry: He didn't make it.
Elaine: I'm sorry.
Jerry: This is Golden Boy's son, Baby Blue.

Jerry: (trying to make George look good) He's working on lowering the cholesterol level in whales. All that blubber, it's quite unhealthy. You know, it's the largest mammal on earth. But as George says, they don't have to be.

George: It was at that moment I decided to tell her that I was not a marine biologist.
Jerry: Wow! What did she say?
George: She told me to go to hell and I took the bus home.

George: The sea was angry that day, my friends - like an old man trying to send back soup in a deli. I got about fifty feet out and suddenly the great beast appeared before me. I tell you he was ten stories high if he was a foot. As if sensing my presence, he let out a great bellow. I said, "Easy, big fella!" And then, as I watched him struggling, I realized that something was obstructing its breathing. From where I was standing, I could see directly into the eye of the great fish.
Jerry: Mammal.
George: Whatever.
Kramer: Well, what did you do next?
George: Well then, from out of nowhere, a huge tidal wave lifted me, tossed me like a cork, and I found myself right on top of him - face to face with the blowhole. I could barely see from the waves crashing down upon me but I knew something was there. So I reached my hand in, felt around, and pulled out the obstruction.
(George reveals the obstruction to be a golf ball)
Kramer: What is that, a Titleist?
(George nods)
Kramer: Hole in one, huh?

George: (to Jerry) It's one thing if I make it up. I know what I'm doing; I know my alleys. You got me in the Galapagos Islands living with the turtles. I don't know where the hell I am!

Jerry: Did you know that the original title for 'War and Peace' was 'War, What Is It Good For?'

Kramer: (points to his head) I've got all my appointments right up here.

Jerry: Six years I've had this t-shirt. It's my best one. I call him Golden Boy.

George: (to Jerry) Why couldn't you make me an architect? You know I always wanted to pretend that I was an architect.

Jerry: Your mother reads your mail?
George: Yeah.
Jerry: What do you mean, like postcards?
George: Oh, anything.
Jerry: She doesn't open.
George: She'll open.
Jerry: You've caught your mother opening envelopes?
George: Yes.
Jerry: What does she say?
George: I was curious.
Jerry: Isn't that against the law?
George: Maybe I can get her locked up.

George: Then of course with evolution, the octopus lost the nostrils and took on the more familiar look that we know today.

George: As I made my way past the breakers, a sudden calm came over me. I don't know if it was divine intervention, or the kinship of all living things. But I tell you Jerry, at that moment, I was a marine biologist.

George's final monologue was not in the original script. Larry David came up with the idea while the episode was being filmed and wrote it on the spot. Jason Alexander quickly memorized the monologue and only one take was filmed.

In the scene where Elaine complains to Kramer about her pocket organizer, you can see a photo of Jerry on Kramer's wall.

It is Larry David's voice you hear on the beach uttering the line, "Is anyone here a marine biologist?"

When Jerry asks Elaine what room Testikoff is in she says 308. However, when the author opens the door it reads 507.

George starts walking towards the water, and once he starts wading in, his pant legs have miraculously been rolled up.

George is telling the story of his encounter with the whale... the whale let out a great bellow and George calms the whale "easy big fella". As he says this, Elaine has her arm resting on the table. A split second later, her arm is upright.