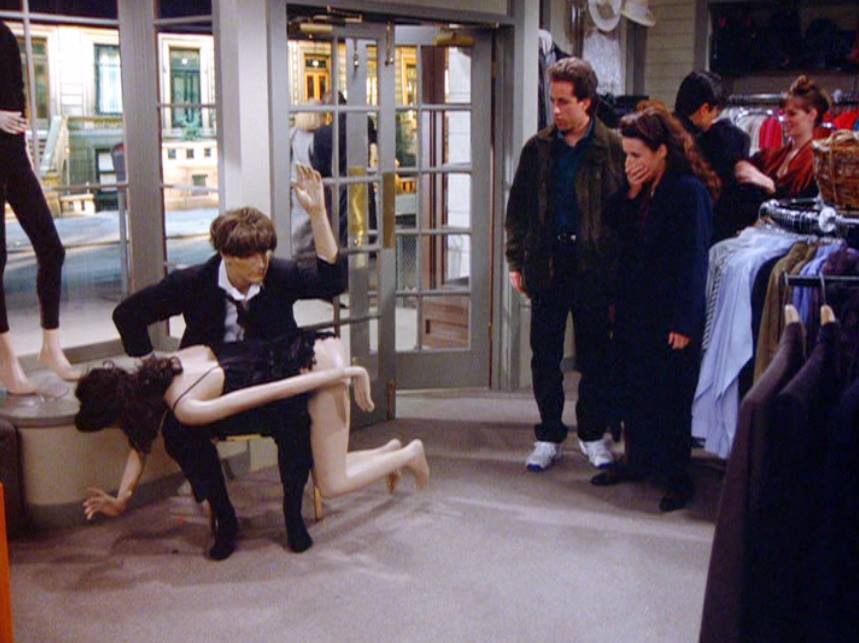 Boy, the resemblance is uncanny.

Jerry can't believe that his girlfriend won't share a piece of pie with him and when he goes out to dinner with her at her father's restaurant what he sees there will only put him into a bad situation. There is a mannequin at a store that looks like Elaine and she wants to know where it came from. Kramer has an itch that he needs scratched. George is interested in a new suit that he makes an enemy over and when he gets the suit, it makes a noise which might be a problem for his job interview.

Kramer: (to Elaine, about the mannequin) It's like they chopped off your arms and legs, dipped you in plastic, then screwed you all back together again and stuck you on a pedestal. It's really quite exquisite!

Kramer: (inviting Elaine to scratch his back) It'll be a funky adventure.

Jerry: A chef who doesn't wash is like a cop who steals. It's a cry for help. He wants to get caught.

Kramer: You guys ought to see the way she works her nails across my back. Ooooo! She's a maestro. The criss-cross, the figure-eight, strummin' on the old banjo. And this wild savage free-for-all where anything can happen!

Jerry: Boy, the resemblance is uncanny.

Elaine: (to a rude store clerk) Did you just roll your eyes at him? Because let me tell you something. If anybody should be rolling their eyes, it is me, at him, about you.

(Sitting next to Elaine and her mannequin twin.)
Jerry: I don't know about you, but I'm getting a hankering for some double mint gum.

Suzanne Snyder, who plays Audrey in this episode, also appeared as Eva in "The Limo".

This episode had 23 scenes, which was the most scenes in any Seinfeld episode to date.

When Elaine called the saleswoman "Natasha", she is referring to Natasha Fatale, an animated character from "Rocky & Bullwinkle".

When George referred to the mannequin as Elaine's "pod", he is making an allusion to the 1955 movie "The Body Snatchers".

George puts at half-eaten bowl of cereal down on Jerry's coffee table, a moment later it is empty.