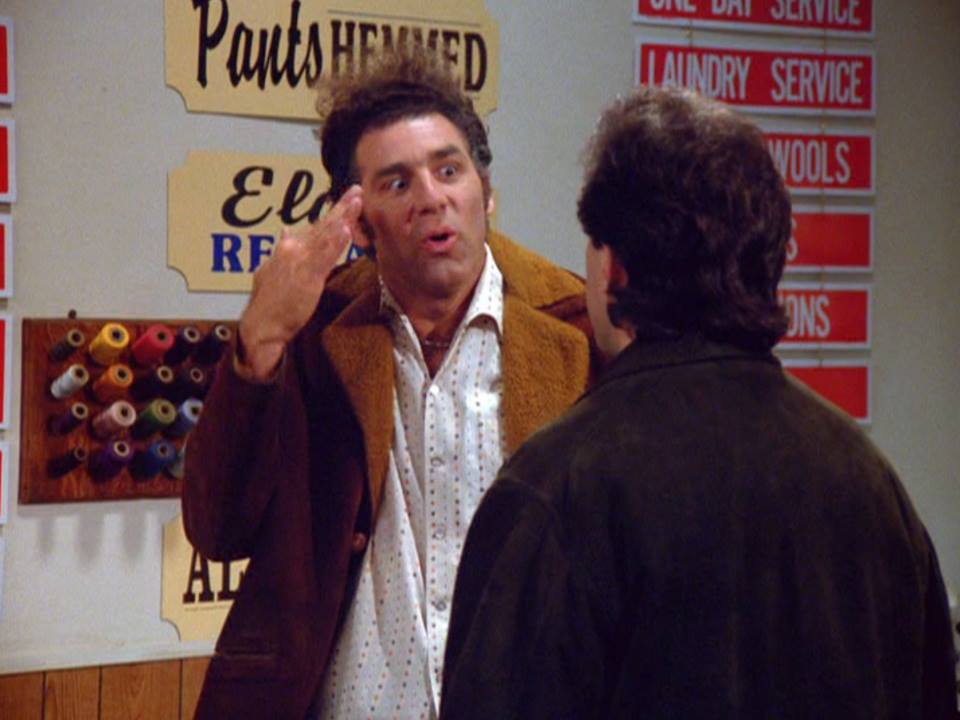 Hey, that's how I maintain my glow!

Jerry and his girlfriend pretend to be married to get a discount on dry cleaning. George worries when a man Elaine is interested in threatens to turn him in for urinating in the gym showers. Kramer's quilt is taken to the dry cleaners and he gets less sleep without it. Jerry's relationship with his "wife" begins to deteriorate and soon starts seeing another woman behind her back. Wanting to impress his girlfriend's parents, Kramer enters a tanning bed, but becomes a little too dark when he falls asleep.

Jerry: I'm really enjoying this marriage thing. You think about each other, you care about each other. It's wonderful. Plus, I love saying 'my wife'. Once I started saying it, I couldn't stop. 'My wife' this, 'My wife' that. It's an amazing way to begin a sentence.

Jerry: He should just go, "Your honor, (puts on flap cap) the defense rests."

George: What if he left you a used kleenex, what's that, a Valentine?

George: It's all pipes! What's the difference?!
Elaine: Different pipes go to different places. You're gonna mix them up!
George: I'll call a plumber right now!
Jerry: Alright, can we cool it with the pee-pipe talk here?

Paula's father: (on Kramer) I don't see a white boy, I see a damn fool!

George: (on why he peed in the shower) It's unhealthy to hold it in. I read that in a medical journal.
Jerry: Did the medical journal say anything about standing in a pool of someone else's urine?

George: A guy leaves a puddle of sweat, that's a signal?
Elaine: Yeah, it's a social thing.

Jerry: I don't know why you're interested in this guy. He's a jerk!
Elaine: Because he doesn't pay any attention to me and he ignores me.
Jerry: Yeah, so?
Elaine: I respect that.

Greg: You're friends with the urinator, aren't you?

Elaine: Why couldn't you just wait?
George: I was there. I saw a drain.
Elaine: Since when is a drain a toilet?

Jerry: Hey, is that my maple syrup? Kramer hands it over.
Meryl: You bring your own syrup?
Kramer: Got to.
Jerry: (to Meryl) You got a lot to learn about pancakes.

Kramer: Hey Elaine, what do you say, if neither of us is married in ten years, we get hitched?
Elaine: Make it fifty.
Kramer: We're engaged!

Marty: (to Meryl) Sure, you get the discount, too.
Jerry: You might regret that, because the money my wife spends on clothes...
Meryl: I'm taking him to the cleaners!
Jerry: Ah - see the sense of humor? C'mere, I'm so nuts about you... (hugs Meryl) I tell ya, it was fun being single, but when you meet a woman like this, you don't walk to get married - you run!

Jerry: Of all the places that you go all the time, the dry-cleaning relationship is one of the most bizarre. Because, you keep giving each other the same thing, back and forth, over and over again. He gives it to you, you give it to him, he gives it back to you. It's like it's half his shirt, in a way. He has it as much as you do...you ought to go shopping with him. "What do you think of this shirt?" "That would look good with a light starch." The only warning label people really respect is "dry-clean only." Y'know what I mean? Speed limits, lung cancer, cigarette warnings - your very life is at stake! People go, "Ah, the hell with it!" But dry-clean only? "Oh, don't put that in the wash! It's dry-clean only! Are you crazy?!"

Jerry: I guess I just wasn't ready for the responsibilities of a pretend-marriage.

Kramer comments that he takes baths. Later in the series, in "The Shower Head", Kramer comments in disgust when he was forced to take a bath, bathing in his own bacteria.

When Jerry and Meryl argue about the can opener, a beer bottle on the counter keeps moving around.

Jerry is talking to his parents telling them he's not married, when he hangs up the phone he accidentally presses redial, you can hear it, then he looks down and presses the correct button to hang up the phone.