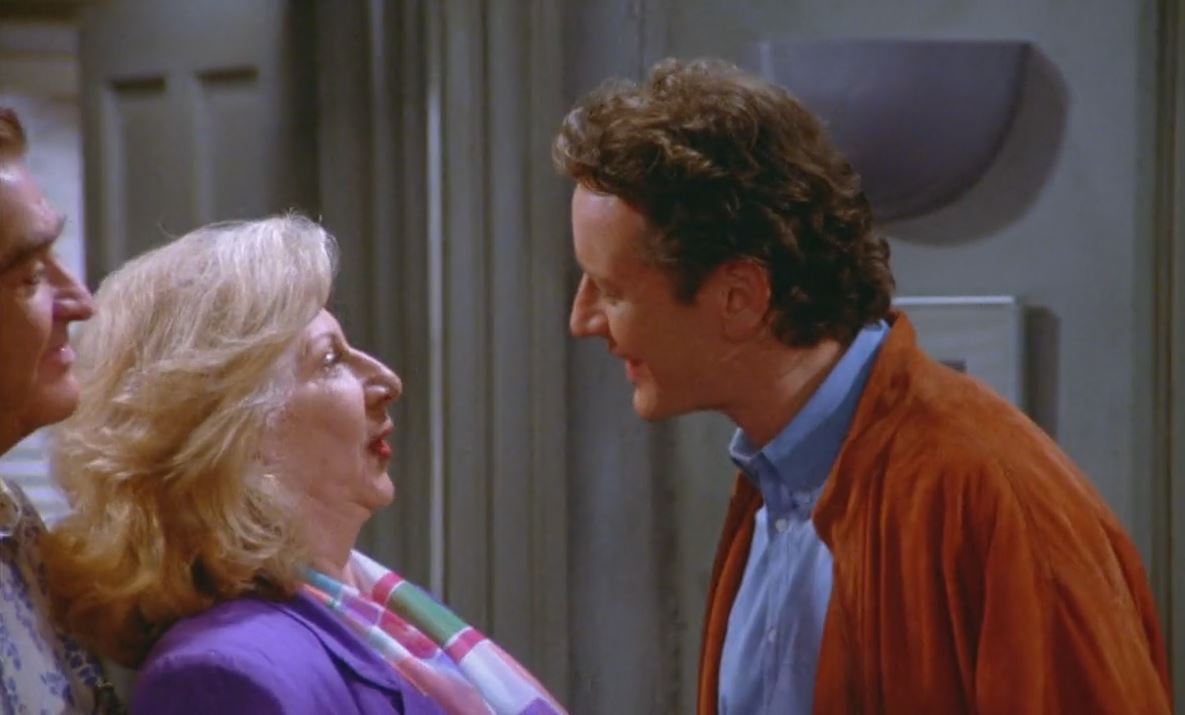 So how long you folks in town?

Jerry's parents are staying with him while they wait to take their trip to Paris and he's just returned from three weeks on the road can't get anytime alone with his girlfriend. George tries to get out of the big brother program, just after he gets talked into it. The Seinfelds avoid the Costanza's dinner invitation. Elaine's latest boyfriend, who's a "close talker," becomes unusually fixated on Jerry's parents and shows them New York City. Kramer makes a deal with Jerry's father to sell belt-less raincoats to a secondhand shop and George sells his father's moth-ridden cabana style clothing, right before they plan a cruise.

George: Maybe this will become like a cool thing: living with your parents.
Jerry: Yeah, then maybe baldness will catch on. Things will all be turning your way.

Morty: (on his beltless trenchcoat) This is 'The Executive'.

Kramer: Oh hey, Helen, uh, could I use some more of your hand lotion?
Helen: I told you it was good.
Kramer: Yeah!
Helen: It's from the Sak's Fifth Avenue in Miami.
Kramer: Mmm. I'm gonna remember that if I'm ever in Florida.
Jerry: Yeah, or if you're ever on Fifth Avenue here, in New York City.

Estelle: Maybe they don't like us.
Frank: Why wouldn't they like us? (tastes the paella) Again with the pepper? What do you gotta use all the pepper for?!
Estelle: Ah, keep quiet!
Frank: (agitated) What, are you trying to set my mouth on fire?!?
George: I don't know what the reason could be.
Jerry: Boy, I had no idea you felt this way about the Costanzas.
Helen: They're exhausting. It's like being in an asylum.

Helen: Jerry, have you seen Schindler's List?
Jerry: No, I haven't see it yet.
Helen: Oh, you have to go. You have to.
Jerry: I'm going.
Helen: You have to!
Jerry: Okayyy.

For this 2-part episode, Judge Reinhold was nominated for the 1994 Emmy Award for "Outstanding Guest Actor in a Comedy Series".

Jerry Seinfeld commented that the humorous references to "Schindler's List" were added after learning how Steven Spielberg got so depressed while filming the movie that he would watch tapes of Seinfeld episodes to cheer himself up.