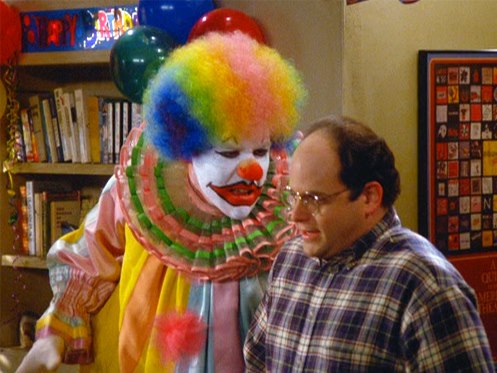 You're living in the past, man! You're hung up on some clown from the sixties, man!

Kramer is dating one of Elaine's co-workers, a woman who drives her crazy. Kramer brings her to one of Jerry's shows, where she heckles him relentlessly; unfortunately there is a national magazine critic in the audience. George panics when there is a fire at his girlfriend's apartment, during her son's birthday party. Jerry decides to get revenge by heckling the woman where she works. She runs out of the office onto the street and loses her pinkie toe. Kramer finds the toe, takes a bus to the hospital and saves the passengers from a gunman. Inspired by Kramer's tale, George tries to confront his feelings of cowardice.

Toby: Look, I have goose bumps. Touch! Touch them!

Jerry: (after Toby heckled him) Booing and hissing are not part of the show. You boo puppets. You hiss villains in silent movies.

Fireman: How do you live with yourself?
George: It's not easy.

George: Go fold your little balloon animals, Eric. Eric... What kind of name is that for a clown?

Kramer: Then, everybody is screaming because the bus driver is passed out from all the commotion. The bus is out of control! So I grab him by the collar, take him out of the seat. I get behind the wheel and now I'm driving the bus!
George: You're Batman.
Kramer: Yeah, yeah I am Batman. Then the mugger, he comes to and he starts choking me. So I'm fighting him off with one hand, and I kept driving the bus with the other, you know. Then, I managed to open up the door and I kicked him out the door, you know. With my foot, you know, at the next stop.
Jerry: You kept making all the stops?
Kramer: Well, people kept ringing the bell.

Jerry: There's no precedent, baby!
George: What, are you using my babies now?

George: How can you call yourself a clown and not know who Bozo is?
Eric: Hey man, what are you hassling me for? This is just a gig, it's not my life. I don't know who Bozo is. What, is he a clown?
George: What? Is he a clown? Are you kidding me?
Eric: Well, what is he?
George: Yes, he's a clown!
Eric: Alright, so what's the big deal? There's millions of clowns. You're livin' in the past, man! You're hung up on some clown from the '60s, man!

Jerry: Bozo the Clown. I mean, does he really need "the Clown" in his title, as clown? Are we gonna confuse him with Bozo the District Attorney? Bozo the Pope? There's no other Bozo.

Robin's Mother: (at George) That's the coward that left us to die!

George: You did all this for a pinkie toe?
Kramer: Well, it's a valuable appendage.

George: She should be commending me for treating everyone like equals.
Jerry: Well, perhaps when she's released from the burnt center she'll see things differently.

Jerry: So you feel women and children first, in this day and age, is somewhat of an antiquated notion?
George: To some degree.
Jerry: So basically, it's every man, woman, child, and invalid for themselves...
George: In a manner of speaking.

Jerry: Men don't care what's on TV, men only care what else is on TV.

Kramer: (about Jerry) After he heckled Toby, she got so upset she ran out of the building. And a street sweeper ran over her foot, and severed her pinkie toe.
George: That's unbelievable!
Kramer: Yeah, then after the ambulance left I found the toe. So I put it in a Cracker Jack box filled it with ice, and took off for the hospital.
George: You ran?
Kramer: No, I jumped on the bus. I told the bus driver 'I've got a toe here buddy, step on it!'

Ronnie: I heard you went down to somebody's office and heckled them?
Jerry: Damn right! We've been lapdogs long enough!
Ronnie: How could you do that? I mean, everybody's talking about it.
Jerry: Well, it's about time one of us drew a line in the sand.
Ronnie: Jerry, you're like Rosa Parks. You opened the door for all of us. I can't wait till the next time someone heckles me.

Jerry's jokes are about men and women watching TV were also included in the opening of the season 2 episode "The Baby Shower".

The character Ronnie (played by Dom Irrera) is wearing a Boston Bruins jersey with the name "Irrera" on the back.

Robin was played by Melanie Chartoff, whom Larry David and Michael Richards knew from the time they worked on the sketch series "Fridays".

The announcer's voice at the comedy club is none other than show co-creator Larry David.