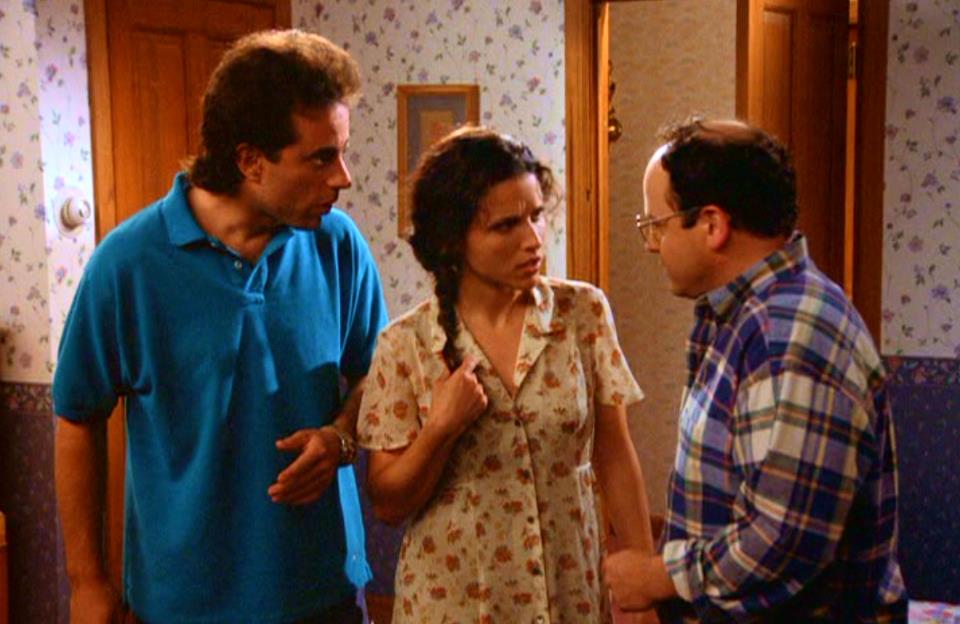 Do women know about shrinkage?

Everyone makes a trip to the Hamptons to "see the baby" and enjoy the weekend. George's girlfriend goes topless and everyone sees her chest before he does. "The baby" is the most hideous thing they've ever seen. Elaine is confused when a handsome doctor refers to her as "breathtaking" - the same term he later uses to describe the baby. Kramer finds a filled lobster trap. Jerry's girlfriend sees George naked, after he's just gotten out of the pool, so something isn't as it should be.

Rachel: The train was so crowded; I had to sit in a seat facing the wrong way.
Jerry: Oh, I like that. It's like going back in time.

George: I never tasted a cough medicine I didn't love.

Elaine: I don't know how you guys walk around with those things.

Jerry: Do women know about shrinkage?
Elaine: What do you mean like laundry?
Jerry: No, like when a man goes swimming afterwards.
Elaine: It shrinks?
Jerry: Like a frightened turtle!
Elaine: Why does it shrink?
George: It just does.

Jerry: (about topless Jane) George hasn't even seen her yet.
Elaine: Why do you think we're getting a sneak preview?
Kramer: Maybe she's trying to create a buzz.
Elaine: What?
Kramer: You know, get some good word-of-mouth going.

Elaine: (about the baby) He was like a Pekinese.
Jerry: Yeah, too much chlorine in that gene pool.

George: Ordinarily I wouldn't mind, but...
Jerry: But what?
George: Well, I just got back from swimming in the pool. And the water was cold...
Jerry: Oh, you mean... Shrinkage.
George: Yes. Significant shrinkage.
Jerry: So you feel you were shortchanged.
George: Yes. I mean, if she thinks that's me, she's under a complete misapprehension. That was not me, Jerry. That was not me.

George: I think that you think that a certain something is not all that it could be, when, in fact, it is all that it should be... And more!
Jane: I'm sure it is.
George: Look, you don't understand. There was shrinkage.

George: (upset that Jerry saw Jane topless before him) It's like I'm Neil Armstrong. I turn around for a sip of Tang, and you jump out first!

Jerry: Is it possible they're just having babies to get people to visit them?

Kramer: Hey, Jerry, rub some lotion on my back.
Jerry: Who are you, Mrs. Robinson?
Kramer: C'mon, and I'll rub some on you.
Jerry: That's not sweetening the deal.

George: (about Jane) I can't believe that you saw her before me.
Jerry: Think of me as a doctor.
George: Well, how good a look did you get?
Jerry: What do you mean?
George: Well, if she was a criminal and you had to describe her to a police-sketch artist...
Jerry: They'd pick her up in about ten minutes.

Kramer: I saw Jane topless.
George: You saw who what?

George: This is fantastic. Man, what do we get? Swimming, lobster for dinner!
Kramer: I know, it's great. I saw Jane topless.

The title refers to the geographic area that includes several villages around Southampton and East Hampton on the east end of Long Island, New York where people reside and the wealthy own beach front homes.

The song during the montage of Kramer at the beach is "Wouldn't It Be Nice?" by The Beach Boys.

This is the only episode of Season 5 that doesn't show Jerry's apartment or the coffee shop.

When Kramer says, "Yo-Yo Ma", he is referring to the famous cello player who has won several Grammy awards for his music. When Jerry says, "Boutros Boutros-Ghali," he is referring to the Egyptian-born diplomat who was the Secretary-General of the United Nations from 1992 to 1997. Both these names are said because they have alliteration.

When Jerry says, "and then there's Maude", he is making a reference to the theme song of the show "Maude", starring Bea Arthur.

This episode has been credited with giving the world a new meaning to the word "shrinkage".

When Jane, turns away from the three on the porch to enter the house, you can see a flesh colored material that is covering her breast.

You can see a crew member's hand when tomatoes are being thrown at George.