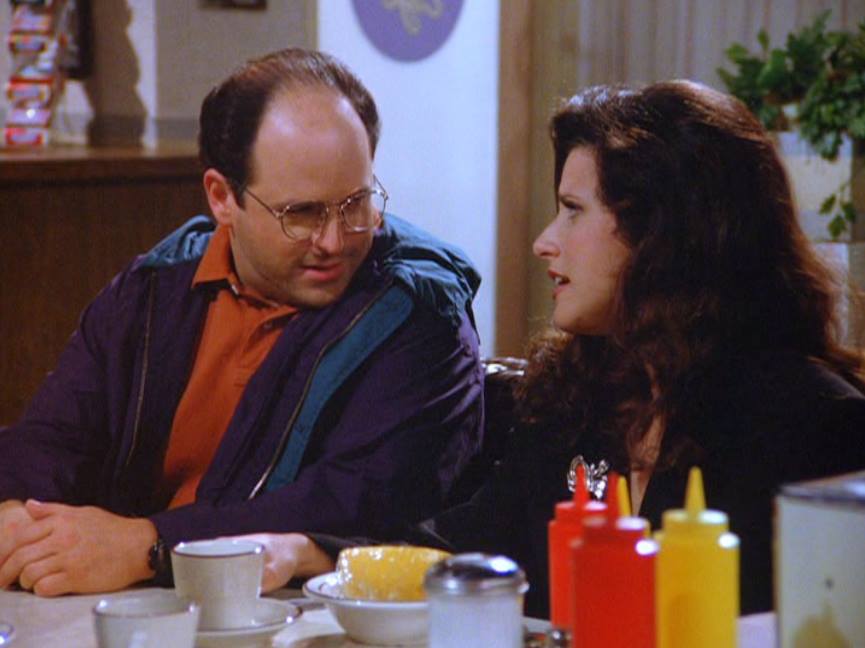 Bald men with no jobs and no money who live with their parents don't approach strange women.

George comes to the realization that he should try to do the opposite of everything, so he does, his luck changes and everything begins to go his way including getting a girlfriend, a job with the Yankees and moving out of his parents' house. Things begin to be unlucky for Elaine after she buys a box of "Jujyfruits." Kramer appears on Regis & Kathie Lee to promote his coffee table book. Rachel wants to break up with Jerry and he readily agrees, because his luck has been "even Steven." Elaine's eating of "Jujyfruits" causes Pendant Publishing to go under, and later she realizes that she and George have traded places.

George: I'll tell you this, something is happening in my life! I did this opposite thing last night. Up was down! Black was white! Good was...
Jerry: ...bad
George: Day was...
Elaine: ...night
George: Yeah!

Jerry: Elaine, don't get too down. Everything will even out. See, I have two friends. You were up, he was down. Now he's up, you're down. You see how it all evens out for me?

George: A job with the New York Yankees! This has been the dream of my life ever since I was a child, and it's all happening because I'm completely ignoring every urge towards common sense and good judgment I've ever had. This is no longer just some crazy notion, Elaine, Jerry. This is my religion.
Jerry: So I guess your messiah would be the Anti-Christ.

Kramer: (to Jerry) You know who you are? Even Steven.

Yankees exec: This is Mr. Costanza. He's one of the applicants.
Steinbrenner: Nice to meet you.
George: Well, I wish I could say the same. But I must say, with all due respect, I find it very hard to see the logic behind some of the moves you have made with this fine organization. In the past twenty years you have caused myself, and the city of New York, a good deal of distress, as we have watched you take our beloved Yankees and reduce them to a laughing stock, all for the glorification of your massive ego!
Steinbrenner: Hire this man!

George: My name is George. I'm unemployed and I live with my parents.
Woman: I'm Victoria. Hi.

George: Bald men with no jobs and no money who live with their parents don't approach strange women.

George: Why did it all turn out like this for me? I had so much promise. I was personable. I was bright. Oh, maybe not academically speaking, but I was perceptive. I always know when someone's uncomfortable at a party. It all became very clear to me sitting out there today, that every decision I've ever made in my entire life has been wrong. My life is the complete opposite of everything I want it to be. Every instinct I have in every aspect of life, be it something to wear, something to eat... It's often wrong.

Mr. Cushman: Why don't you tell me about some of your previous job experiences?
George: Alrighty. My last job was in publishing. I got fired for having sex in my office with the cleaning woman.

Victoria: Who are you George Costanza?
George: I'm the opposite of every guy you've ever met.

George: ( to his parents ) I want you to know how much you mean to me. I love you both very very much.
Jerry: (whispering to Kramer) Opposite....

George: Shut your traps and stop kicking the seats! We're trying to watch the movie! And if I have to tell you again, we're gonna take it outside and I'm gonna show you what it's like! You understand me!? Now, shut your mouths or I'll shut 'em for ya, and if you think I'm kidding, just try me! Try me, because I would love it!

Jerry: You're going on Regis and Kathy Lee? I'll loan you my puffy shirt.

Jerry: (to George) If every instinct you have is wrong, then the opposite would have to be right.

Elaine: (after realizing she and George have switched fates) I'm George. I'M GEORGE!

Regis Philbin: (introducing Kramer) This guy could be a little bonkos.

The working title for this episode was "The Even Steven".

This episode won the 1994 Emmy Award for Outstanding Individual Achievement in Editing for a Series - Multi-Camera Production.

It is starting with this episode that Larry David supplied the voice of George Steinbrenner.

According to Jerry Seinfeld, the line from George's angry rant at the movie theater, "We're gonna take it outside and I'm gonna show you what it's like," is based on a line from a notorious Buddy Rich bootleg tape, where he would berate his band members for playing too loud.

In his memoir, "How I Got This Way", Regis Philbin recounted how he was embarrassed and disappointed with Jerry Seinfeld and the show's writing crew after his line, "This guy's bonkos!" did not resonate with the studio audience. Philbin had objected to the line prior to the taping of the episode, a request which Seinfeld and the writing staff did not honor.

George had already hinted about "the opposite" in the series pilot, "The Seinfeld Chronicles". It happened when George advised Jerry not to clean his bathroom before a woman visits: "In these matters you never do what your instincts tell you. Always, ALWAYS do the opposite."

Kramer tells Regis Philbin that he came up with the idea for his coffee table book while skiing. However, in "The Cigar Store Indian", he appears to get the idea in George's parents' home after Jerry stains their coffee table.

Elaine gets a bottle of water from Jerry's fridge and then drinks from it. Afterward, she is shown taking the cap off the unopened bottle.