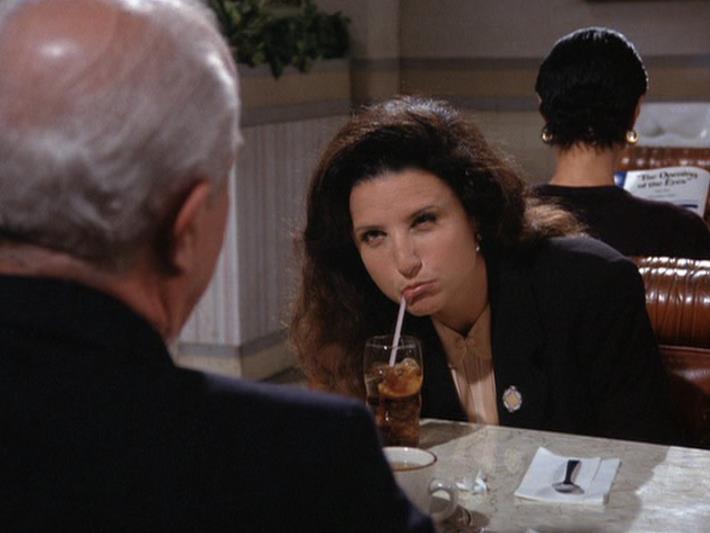 You think I have grace?

Jerry gets a date with Miss Rhode Island, a Miss America contestant; when they need a chaperone, Kramer is available. On the date, Kramer gives her advice and becomes her personal coach. Elaine tries to get a job at Doubleday, filling in the shoes once filled by Jackie Onassis; instead she gets a job being the personal assistant of a top executive who likes white socks. Her new job is restricting to her personal life. Meanwhile, George decides that the Yankees need to change their uniforms from polyester to cotton. A good idea at first, until something goes wrong on the field.

Kramer: Now if I've told you once, I've told you a thousand times: poise counts! It's just as important as the others. Swimsuit! Evening wear! Talent! POISE!

Kramer: Let's try a few more questions, alright? If you were Miss America, and the U.S. was on the brink of a nuclear war, and the only way the conflict could be averted was if you agreed to sleep with the enemy's leader, what would you do?

(after Kramer has just shouted at Jerry for killing Karen's doves)
George: What was that all about?
Jerry: Oh, it was just Kramer. Apparently I killed Miss Rhode Island's doves with the bucket of water last night.
George: (with apathy and insensitivity) Huh.

Kramer: These doves were murdered.

Jerry: I'm going out with one of the Miss America contestants. You want to go?
Kramer: What state?
Jerry: Rhode Island.
Kramer: They're never in contention.

Jerry: So you're Miss Rhode Island? I was almost named Mr. Coffee, they felt I was a little too relaxed.

(watching Miss Rhode Island sing)
Jerry: It's like watching an animal get tortured.

Announcer #1: And the Yankees take the field!
Announcer #2: What is with the Yankees? They look like they're having trouble running, they can't move!
Announcer #1: It's their uniforms, they're too tight, they've shrunk! They're running like penguins! Forget this game!

While Miss Rhode Island sings there is an audience shot with Merv Griffin visible in the front row.

Aside from the pilot, this is the only season opening episode that doesn't include the coffee shop.

Elaine mentions that they are looking for someone to replace Jackie Onassis at Doubleday. Jacqueline Kennedy Onassis died in May of 1994 and this episode aired in September of the same year. Jackie Onassis had worked as an editor for Doubleday since her husband's death (Aristotle Onassis) in 1975.

This is the first episode where Jerry uses his famous catch-phrase: "That's a shame." Even though Jerry continues to use the phrase as his own through the rest of the series, you'll notice that it is actually George is the one who first to say it at the end of this episode.

When Jerry says, "Goodnight Ollie," and George replies, "Goodnight Stan," they are making a refence to Laurel and Hardy.

This episode marks the first appearance of Mr. Pitt as Elaine's boss.

When the Miss America contestants are coming down the aisle in the stadium stands, the seat that Jerry is supposedly sitting in (seen later in the scene when he talks to Miss Rhode Island) is empty.

When Jerry calls Miss Rhode Island, a magazine sitting on George's lap has a purple square and an orange-tinted photo showing. Afterward they cut away, and then cut back to George where we see the magazine's position has changed and a different page is showing.

When Jerry tells Elaine she could have been a Miss America contestant, he starts to look down at his hot dog. In the next shot, his face is pointed up again.