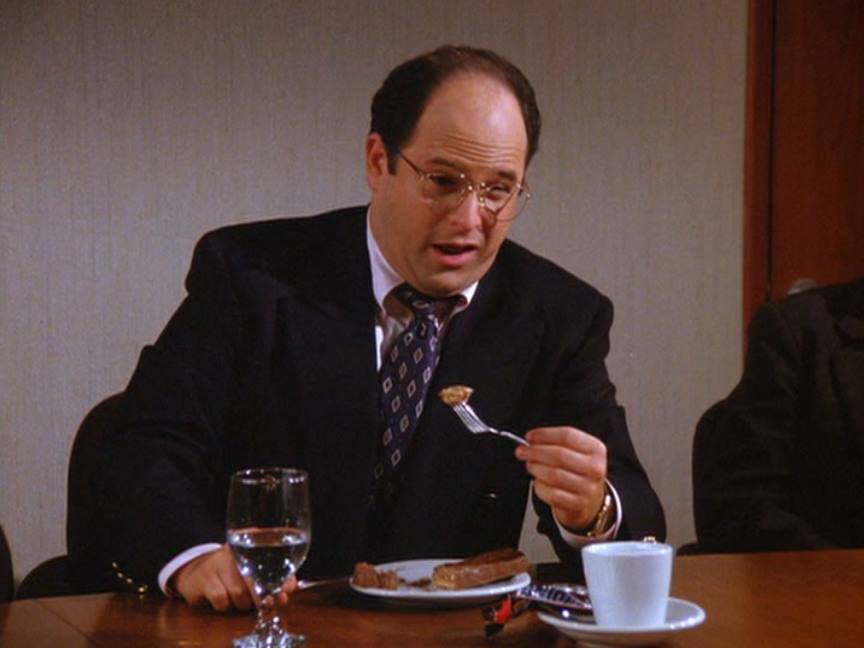 I am eating my dessert. How do you eat it, with your hands?

Jerry comments that a friend was hitting on him and Elaine tries to find out if what was true, but gets the voice of the woman and her current boyfriend confused. Elaine's boss eats his Snickers bar with a knife and fork and idea that soon catches on. George thinks a waitress gave him the finger. Jerry gets caught throwing away a thank you card. Jerry cashes some old birthday checks from his grandmother. Jerry's working a PBS pledge drive and gets George to bring a Yankee to appear with him, while en-route to the studio, someone gives George the finger.

Noreen: Great. I'm going out with a man who sounds like a woman.
Elaine: Well, he looks like a man.

Kramer: (volunteering at PBS) Where are the tote bags? I'm not leaving the premises without tote bags. I was promised tote bags and tote bags I shall have.

Mr. Morgan: (sees George eating a Snickers with a fork) Uh, what the hell are you doing?
George: I am eating my dessert. How do you eat it, with your hands?

Jerry: Well, I cashed the checks, the checks bounced and now my Nana's missing!
Kramer: Well don't look at me!
Jerry: It's your fault!
Kramer: My fault?!? Your Nana, is missing, because she's been passing those bum checks all over town, and she finally pissed off the wrong people!

Nana: Hello, I need to speak to Jerry.
Elaine: (thinks it's Dan) Oh, it's you. We were just talking about you. Listen, Jerry doesn't want to talk to you. Nobody wants to talk to you, so why don't you just drop dead?!

Kramer: I get a percentage of every pledge I bring in, right?
Jerry: No. It's not aluminum siding, it's volunteer work.

Elaine: (looking at Jerry's second card) Is this little bunny giving you the....
Jerry:Yes. He is.
Elaine:You should show that to Georgie.

Dan: Is Jerry in there?
Kramer: Well, he can't be disturbed now.
Dan: Well this situation is driving me crazy. He's all I think about. I can't get him out of my mind.
Kramer: I'm sorry. I mean, I know what it's like to be in love. Ties you up in knots. And Jerry is a very sexy man.
Dan: What?
Kramer: Look, I'm not judging you. In fact, we here at PBS, we have many programs celebrating your lifestyle. Armistead Maupin's Tales of the City: gender bending and swinging in San Francisco.

Jerry: (to George) Yea, go do your thing where you lie to everyone.

Jerry: I saw someone on the street eating M&M's with a spoon.

Jerry: (in trouble for throwing a card in the trash) It was a 'thank you' card from Kristin because I'm doing the PBS drive. I mean, how long am I supposed to keep it?
George: The rule is a minimum of two days.
Jerry: You making that up or do you know what you're talking about?
George: I'm making it up.

George: Did you just see what happened here? Did you see the way she pointed at the check? She gave me the finger!
Jerry: That's how waitress-types express derision. They don't want to get their mouths dirty.

George: If my parents had a mantle, I might be a completely different person.

Lauren Bowles who plays the waitress that gave George "the finger" is Julia Louis-Dreyfus's half-sister. She also appeared in "The Big Salad", "The Foundation", "The English Patient", "The Summer of George", "The Reverse Peephole" and "The Bookstore".

During the pledge drive, Jerry mentions "programs like Ken Burns' Baseball". This is a reference to the 1994 PBS miniseries called "Baseball" produced by Ken Burns.

When Kristin picks up her jacket to go to the office, she puts one arm into a sleeve. It then cuts to a different angle and her jacket is completely on and she is putting on her purse.

Jerry wouldn't have been able to cash the older checks. Once checks are six months old they are stale-dated.

Before Mr. Pitt starts eating his chocolate bar, he cuts a single slice but when the camera switches to a wider shot, the chocolate bar is suddenly cut into several slices.