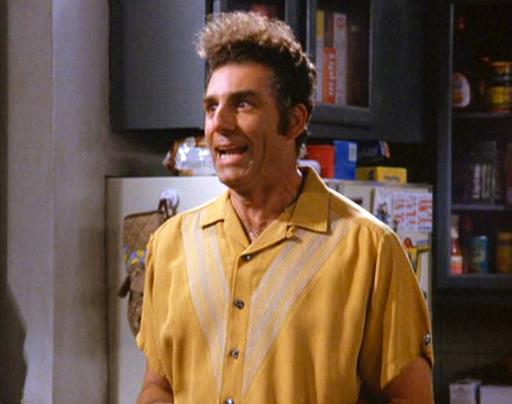 I'm out there Jerry and I'm loving every minute of it.

Jerry and Elaine see George's father with a man with a cape but don't say hello. Jerry discovers a Chinese woman on George's phone line after the wires get crossed and he gets a date with her. Kramer gets worried about his sperm count, so he goes to a fertility clinic and then makes a change in his choice of undergarments. Elaine ruins her friend Noreen's latest romance with a long talker. The Chinese woman turns out to be Jewish and from Long Island. Estelle gets advice about her relationship with Frank from the Chinese woman, but discounts it when she meets her. George's life is made miserable when his parent's separate.

Jerry: (about George) It's a shame his parents didn't get divorced thirty years ago. He could've been normal.

George: I don't trust men in capes.
Jerry: You can't cast aspersions on someone just because they're wearing a cape. Superman wore a cape, and I'll be damned if I'm going to stand here and let you say something bad about him.
George: Alright, Superman's the exception.

George: (referring to divorce) All right, let me just say one thing. There is no way this is gonna happen, you hear me? No way! Because if you think I'm going to two Thanksgivings, you're out of your mind!

Jerry: Well, it looks like you've adjusted to the boxers.
Kramer: Well, I wouldn't go as far as that.
Jerry: You went back to the Jockeys?
Kramer: Wrong again.
Jerry: (realizing that Kramer is not wearing underwear) Oh, no.
Elaine: What? What?
Jerry: Don't you see what's goin' on here? No boxers, no Jockeys...
(Elaine backs away from Kramer, disgusted)
Jerry: The only thing between him and us is a thin layer of gabardine...Kramer, say it isn't so.
Kramer: Oh, it be so.
(Jerry turns his head in disgust)
Kramer: I'm out there, Jerry, and I'm lovin' every minute of it.

Kramer: You ever get a woman pregnant?
Jerry: I'm sorry, Kramer, those records are permanently sealed.

Jerry: (to a polite smoker) No, go ahead. I second-hand smoke two packs a day.

George: (leaving a message on Jerry's answering machine) Hey, it's George. I got nothing to say.

Larry David appears (uncredited) as Frank Costanza's lawyer (the man in the cape).

When Donna Chang is speaking to Jerry and Elaine in his apartment, her hair is pulled back. Then it cuts away quickly and returns showing her with her hair parted in the middle.