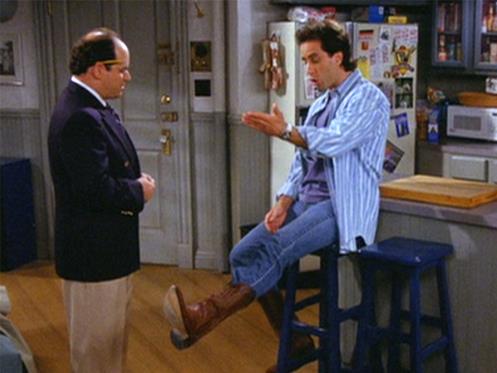 I don't wanna be a cowboy!

A salesman convinces George to buy a convertible once owned by "Jon Voight." Kramer tries to save a small shoe-repair business, but his good intentions affect Jerry in a big way. Elaine wins tickets for Mr. Pitt, who's always wanted to participate in the Macy's Thanksgiving Day Parade.

George: For all I know, this guy went out of his way to not invite you. How am I going to feel if I show up with an uninvited, unwelcome intruder?
Jerry: The way I feel when I go places with you?

Jerry: Mom and Pop aren't really a Mom and Pop!
Kramer: It was all an act, Jerry. They conned us, and they scored big-time!

George: What's so great about a mom and pop store? Let me tell you something, if my mom and pop ran a store I wouldn't shop there.

Jerry: You bought a car because it belonged to Jon Voight?
George: No, no...
Jerry: I think yes, yes.

Kramer: You've got a problem with Woody Woodpecker?
George: Yeah, what is he, some sort of an instigator?
Kramer: That's right. He's a trouble-maker.

Kramer: You look like a cowboy.
Jerry: I don't wanna be a cowboy!

Elaine: So Mom and Pop's plan was to move into the neighborhood, establish trust for 48 years, then run off with Jerry's sneakers?
Kramer: Apparently.

Kramer encourages Jerry to wear the cowboy boots by telling him that he looks like a cowboy. Jerry responds by whining "I don't wanna be a cowboy!" This is a variation of a line from Season 5's "The Puffy Shirt" where Jerry's whiny response is "I don't wanna be a pirate!"

This was the last Seinfeld episode to use the 1989 Castle Rock Entertainment Television logo.

This is the first episode to feature Tim Whatley (Bryan Cranston). He returns in four other episodes.

Many facets of this episode make reference to the 1969 movie "Midnight Cowboy", which starred Jon Voight. The theme sone from the movie, "Everybody's Talking at Me is heard playing twice. Jerry wears cowboy boots during the episode. Also, the ending of this episode, with Kramer suffering a nosebleed and Jerry comforting him in the back of a bus, mirrors the ending of "Midnight Cowboy".

When Jerry says he got Chewing gum on his shoes, you see a black sole. In the next scene we see white shoes with white soles.

When Jon Voight bites Kramer's arm, you can see clearly that the bite is on the wrist. However, the Kramer shows George the bite, he shows the area around the elbow.

When the party is taking place at Tim's apartment you can see out the window that it's nighttime. However, in the next scene when Jerry & Kramer watch the giant Woody Woodpecker balloon deflating you can clearly see it's daylight outside.