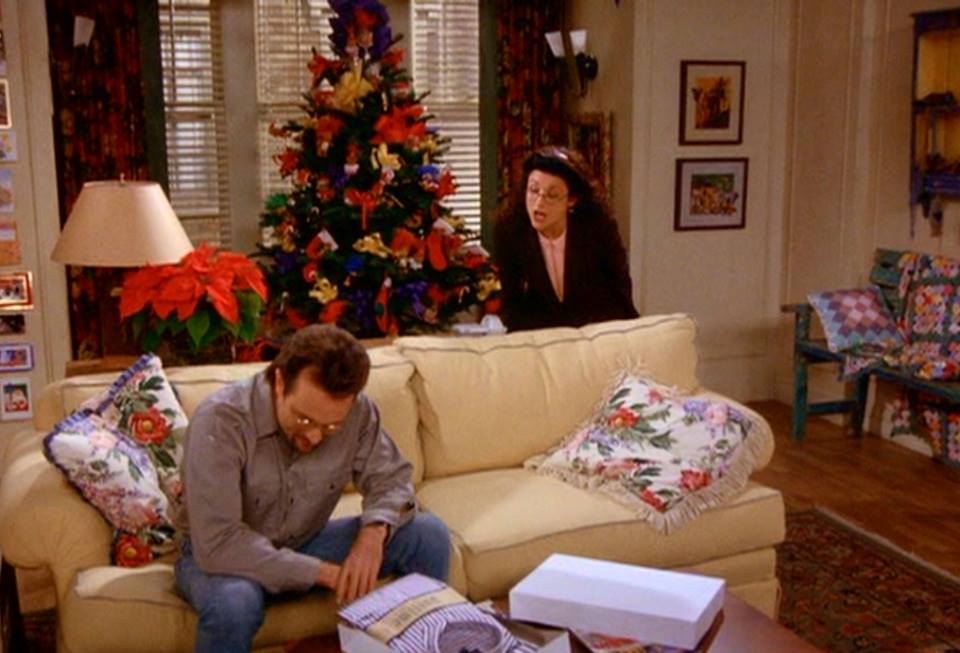 Through his current girlfriend, Lois, Jerry meets an old rival, who suspects that he cheated in a high school race and he wants a rematch with Jerry to prove he was faster. Elaine is put on a "blacklist" for Chinese food delivery and finds out her boyfriend is a Communist. George responds to a personal ad in a Communist newspaper while at work, when Steinbrenner hears about it, he wants to see George in his office. Through his friend Mickey, Kramer becomes a department store Santa, who later spouts out Communist propaganda.

George: (trying to get a date with a communist) Yes, this is a business office, but I'm not a businessman per se. I'm here working for the people. I'm causing dissent, stirring the pot, getting people to question the whole rotten system.

Kramer: There are no delicatessens under communism.
Mickey: Whoa! Why not?
Kramer: Well, because the meats are divided into a class system. You've got pastrami and corned beef in one class and salami and bologna in another. That's not right.

George: (about communist personal ad) 'Appearance not important!' This is unbelievable. Finally, this is an ideology I can embrace!

Kramer: (working as a department store Santa Claus) Eight hours of jingle-belling and ho-ho-hoing. Boy, I am ho'd out.

George: I can't believe you're really going out with a woman named Lois.
Jerry: I know. Finally!

Jerry: I didn't hit puberty until the 9th grade...that's what gave me my speed.

Kid: Santa's a commie!
Mickey: How did a kid like you learn such a bad word like that?

Jerry: Why, I'd have to be Superman to do that, Lois.

Lois: So you were the fastest kid in school?
Jerry: Faster than a speeding bullet, Lois.

Jerry: I choose not to run!

Elaine: Just because you're a Communist, does that mean you can't wear anything nice? You look like Trotsky.
Ned: Good!

George: (about personal ad) It says appearance not important!
Jerry: Yours or hers?

Jerry wears red and blue clothes throughout the episode (representative of Superman's colors).

When Elaine calls Hop Sing's from Ned's apartment, her name appears on a "blacklist" posted on the wall. The other names on the list are some of the crew members.

There is a deleted scene where Kramer takes George down to the Cuban embassy. It was cut due to time constraints.

On this episode, Mark Christopher Lawrence plays Kramer's boss. In "The Airport", he played the luggage valet working at the airport when Jerry and Elaine ask him how much they should give him for tip.

When Kramer attempts to speak to the child in her own language, it is a reference to the 1947 film "Miracle on 34th Street" in which Edmund Gwenn as Kris Kringle responds to a little Dutch girl in her own language. The difference being, Kramer does it very poorly.

The Chinese food delivery man's insistence that Elaine should "name names" is a reference to the hunt for/prosecution of communists in the 1950/60s.

Many lines throughout the episode, such as "Faster than a speeding bullet, Lois," "Jimmy's in trouble, Lois," "Why, I'd have to be Superman to do that, Lois," and several others are clear references to Jerry's favorite comic book character, Superman.

The Daily Worker had long ceased publication by the time of this episode, though it still works as a gag.

When the little girl sits on Kramer's lap, her mother places her hand on the girl's left shoulder. In the next shot the hand is on her right shoulder.

When Jerry tells Elaine about the race in her apartment, Elaine puts her glass on the front edge of the coffee-table. In the next shot it is far on the other side of the table.