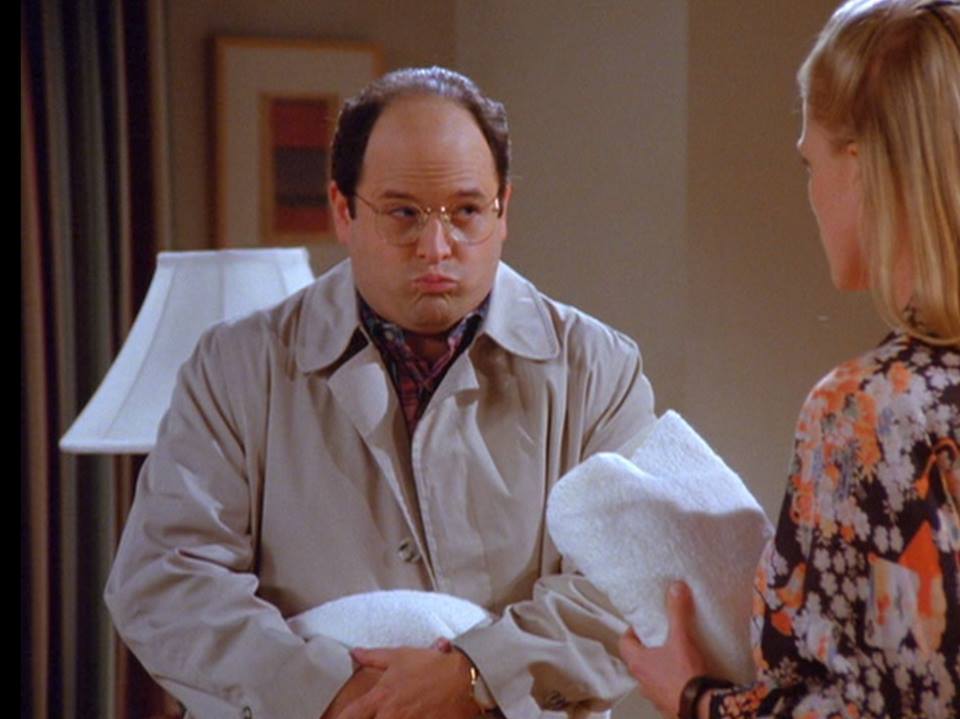 I'm not sure how you pronounce it or anything, but uh, I believe it's menage a trois?

Elaine lets a potential employer borrow Mr. Pitt's tennis racket, but the injury suffered may ruin her chances, especially when she must get his racket back. Jerry's girlfriend never laughs, but he meets her roommate who does, so Jerry decides he would like to make "the switch." George's model girlfriend may be bulimic. He needs proof, so he meets Kramer's mother, who's a bathroom matron. While there he finds out Kramer's first name, Cosmo. Kramer decides it is time to be himself and begins to use his first name. George has the perfect plan for "the switch," a menage a trois.

George: I found out another juicy little nugget about our friend.
Elaine: What?
George: I uh... got the first name
Elaine: You found out Kramer's first name?!
George: That's right. You ready?
Jerry: I've been trying to get it out of him for 10 years! What is it?
George: Cosmo.
Jerry/Elaine: Cosmo?

George: Do you realize in the entire history of western civilization no one has successfully accomplished the roommate switch. In the middle ages you could get locked up for even suggesting it.
Jerry: They didn't have roommates in the middle ages.
George: How do you know?
Jerry: Well, for one thing, they didn't have apartments.
George: Well, I'm sure at some point between the years 800 and 1200 somewhere there were two women living together.

George: Are you crazy?! This is like discovering Plutonium...by accident!

Jerry: (about his new girlfriend, a non-laugher) The jokes kept bouncing off her like Superman.

George: (to Jerry) Do you ever get down on your knees and just thank God that you know me and have access to my dementia?!

George: Every time we go out to eat, the minute we were done eating, she's runnin' to the bathroom.
Elaine: So you're concerned?
George: Elaine, of course I'm concerned. I'm paying for those meals.

Kramer: All my life I've been running away from that name. That's why I wouldn't tell anybody. But I've been thinking about it. All this time I'm trying not to be me. I'm afraid to face who I was. But I'm Cosmo, Jerry, I'm Cosmo Kramer, and that's who I'm going to be. From now on, I'm Cosmo!

This is the episode where we discover Kramer's first name is "Cosmo". Kramer's first name was originally going to be "Conrad" which was supposed to be revealed in Season 2's "The Bet". However, that episode was scrapped due to its controversial storyline in which Elaine buys a gun. The name "Cosmo" came from Larry David, who had a neighbor named Cosmo while living in New York

When Kramer and Babs are strolling down the street and everyone is saying hello to Cosmo. The last voice heard was that of Larry David.

After Jerry tells Elaine and Landis that Newman is a fantastic tennis player, it cuts to a different angle and Jerry is already walking away from them in a different direction.