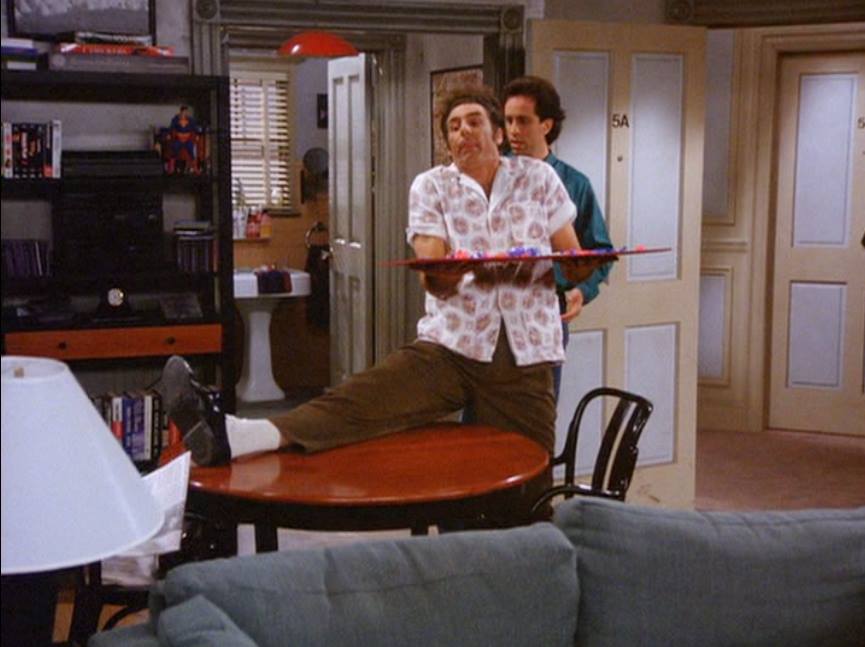 It's Risk, Jerry. The game of world conquest.

Jerry and Elaine experience "re-gifting" and "de-gifting" when it comes to a label maker and a pair of Superbowl tickets. George loves his new girlfriend's apartment, but is shocked to learn that she has a male roommate. Meanwhile, Kramer and Newman become engrossed in a game of Risk.

Jerry: I think he re-gifted and then he de-gifted and now he's using an upstairs invite as a springboard to a Superbowl sex romp!

George: (on the Super Bowl tickets) How about Kramer or Elaine, they don't want them?
Jerry: I asked. Elaine laughed at me, Kramer's only interested in Canadian football.

Jerry: Newman! He's going with Newman!
George: How does Tim Whatley even know Newman?
Jerry: He's his mailman.
George: Who goes to the Superbowl with their mailman?
Jerry: Who goes anywhere with Newman?
George: Well...he's merry.
Jerry: He is merry - I'll give him that.

Newman: Jerry, I'm a little insulted.
Jerry: You're not a little anything, Newman.

George: I would drape myself in velvet if it were socially acceptable.

Scott: Are you gonna need the bathroom? 'Cause I'm gonna jump in the shower.
Bonnie: No, just throw my bras out of the way.

Kramer: (to Jerry) Alright, fine, you sit there and you watch while Newman takes over the world. But he'd be a horrible leader. And you know who's going to suffer? The little people. You and George.

George: Hey, do you know, Bonnie, I just had a pretty wild idea.
Bonnie: What is it?
George: Well I, uh, I'm not sure how you pronounce it or anything, but I believe it's menage a trois?

George: Well if he can regift, why can't you degift?

Kramer: Jerry, Newman and I are engaged in an epic struggle for world domination. It's winner take all. People cannot be trusted.
Newman: Don't look at me.
Kramer: Oh, I'm looking right at you, Big Daddy.

Kramer: We have to put the board in a neutral place where no one will tamper with it.
Jerry: So that's here?
Kramer: Yes, yes. You're like Switzerland.
Jerry: I don't wanna be Switzerland.

George: What's that?
Jerry: Oh, it's Risk. It's a game of world domination, being played by two guys that can barely run their own lives.

Kramer: (close to victory in Risk) You know what the Ukraine is? It's a sitting duck. A road apple, Newman. The Ukraine is weak. It's feeble. I think it's time to put the hurt on the Ukraine.
Ukrainian: I come from Ukraine. You not say Ukraine weak.

Kramer: (after catching Newman cheating at Risk) I'm taking the Congo as a penalty!

Jerry: Hey, how would you like to go to the Super Bowl?
Tim: What, are you kidding?
Jerry: Here. Two tickets. Have a good time.
Tim: How can I thank you? I'll tell you what, I'll take you to dinner sometime. You ever been to Mendy's?
Jerry: (panicky) No, no, no! No dinner!

In this episode, George claims he would drape himself in velvet if it were socially acceptable. In the later episode, "The Doodle" he actually does it by donning a velvet suit.

The fire-escape Newman uses to get into Jerry's apartment is black metal, but whenever we see Jerry's building from the outside, it is white stone.

In this episode Jerry tells George that Kramer didn't want the Superbowl tickets because he's only interested in Canadian Football. However, in the episode "The Masseuse" Kramer jumps at the opportunity to go to the New York Giants game.