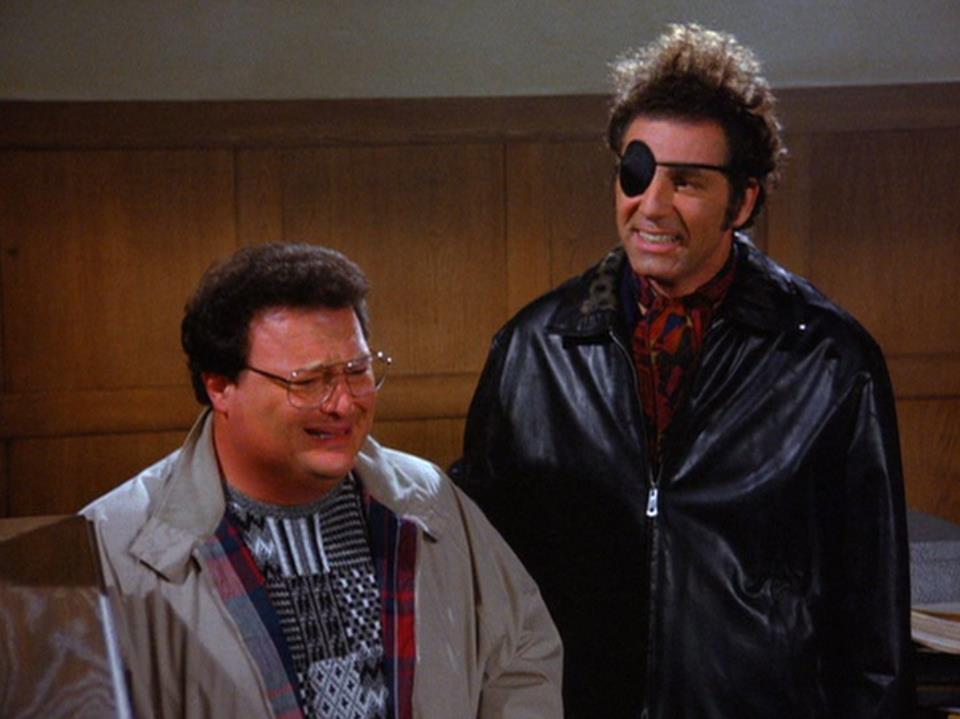 Well, don't you worry, Your Honor. He's in my custody.

George meets an old friend who's spent the last few months undergoing chemotherapy that everyone knew except him. Kramer calls a litterbug "a pig" near a cop who's on a quest to catch a longtime parking ticket scofflaw. Kramer wanting to change his image asks Elaine where her old boyfriend got his glasses. He goes to see him at a book signing and says hi for Elaine that means that she has lost the "upper hand" in their breakup, so she confronts him and then gets even by getting a copy of his glasses. George finds out from Gary, that he lied about his cancer and has been taking advantage of Jerry's kindness. Kramer discovers the identity of "the scofflaw." George gets a toupee.

Gary: (about the mysterious woman from Monk's) She won't talk to anyone. Oh no. She won't say a word to anybody. Well, she's talking to Blue Streak now, Jack!

Jerry: I don't think I can be that nice.
George: You be nice!

Jerry: What's this?
Kramer: It's an eye patch.
Jerry: You look like a pirate.
Kramer: I wanna be a pirate.

Cabbie: Smugness is not a good quality.

George: Was he on his death bed?
Jerry: No, he was on his regular bed.

Elaine: (to Jake) So, you see, Kramer took it upon himself to say hi to you for me, when in fact it was an unauthorized hi.

Gary: The thing is...I've been living a lie.
George: Just one? I'm living like twenty.

Elaine: I had the upper hand in the post-breakup relationship. If he thinks that I said hi, then I lose the upper hand.
Jerry: It's like a game of tag.

When Kramer comes into the coffee shop wearing an eye patch, Jerry tells him he looks like a pirate. Kramer responds, "I want to be a pirate". This is in contrast to Season 5's "The Puffy Shirt" where Jerry's whines, "I don't wanna be a pirate!"

In the scene where Newman and Kramer are in court, the judge refers to Newman as "Mr. Newman". This might confirm that Newman is a surname and not a first name.

When the "scofflaw" is referred to as a "white whale" it is an allusion to Herman Melville's novel "Moby Dick", where Captain Ahab became obsessed with hunting down and killing a white whale called Moby Dick.

When Kramer is explaining to the police officer that he was yelling at somebody else, a boom mic is appears on the top right.

After Kramer gets into the car with Newman and tells him to "just drive", a white car magically appears out of nowhere in the background over Kramer's shoulder.

When Jerry and George talk about Gary in the apartment, Jerry takes one water bottle out of the fridge. When Elaine comes over a second bottle appears on the counter out of nowhere, disappears, and then reappears.

When George explains to Jerry about Gary's surgery, he holds his glasses loosely at his side. In the next shot, he has them almost completely on.