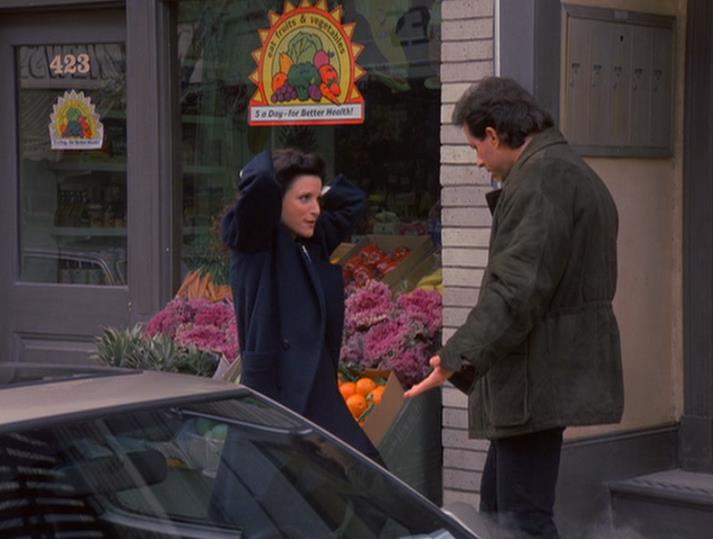 Elaine tries to convert a gay man to heterosexuality. George, who's now wearing his toupee, discovers that the woman Kramer has set him up with, is bald. Kramer gives a homeless man some Chinese food and begins standing in police lineups for $50 a lineup. Jerry begins to date a cop, but she wants him to take a lie detector test, she thinks he is lying about NOT watching Melrose Place.

Kramer: (to George, about the bald woman) You blew it, boy...You really blew it!

Jerry: When someone is lying, is it true that their pants are actually on fire?

Jerry: (to Elaine) And we discover yet another talent... posing as a girlfriend for homosexuals.

George: When she threw that toupee out the window, it was the best thing that ever happened to me. I feel like my old self again: totally inadequate, completely insecure, paranoid, neurotic. It's a pleasure!
Jerry: It's good to have you back. You've had, like, a religious awakening. You're a bald again!

Jerry: Shut up, shut up! 'Melrose Place' is coming on. Oh, that Michael, I hate him. He's just so smug!

George: I got rejected by a bald woman.

Elaine: (about Jerry's lie that he doesn't watch Melrose Place) This is so stupid! Why don't you just confess?
Jerry: It's too stupid to confess. Look what I'm confessing to.
Elaine: Well, what are going to do?
Jerry: I don't know. Maybe I could beat the machine.
Elaine: Uh! Who do you think you are? Costanza?
Jerry: Hey, you know what? I have access to one of the most deceitful, duplicitous, deceptive minds of our time. Who better to advise me?

Elaine: Being a woman, I only really have access to the equipment, what, 30-45 minutes a week, and that's on a good week. How can I be expected to have the same expertise as people who own this equipment and have access to it 24 hours a day their entire lives?

Elaine: I have hit the jackpot. The perfect man -- nothing but sex and shopping.

Jerry: (referring to George's toupee) Don't you think she could tell?
Kramer: No, no, no, can't tell. It's a perfect match, beautiful job.
Jerry: Are you kidding? I could spot that bird's nest two blocks away.

Elaine: Have you ever been to the ballet?
Jerry: No, but I've seen people on tiptoes.

George: Remember, Jerry, it's not a lie if you believe it.

Jerry: Elaine, you know what you've done? You've given hope to every woman who said 'Too bad he's gay.'
Elaine: Well, it's a lesson for the kids out there. Anything is possible. Jerome, I've hit the jackpot. Nothing but sex and shopping!

Jerry: So, did you describe yourself to her over the phone?
George: I told her the truth.
Jerry: As you see it?
George: Yes, as I see it.

The homeless man that Kramer gave the Chinese food to is played by Jon Gries, who went on to play Uncle Rico in the hugely popular "Napoleon Dynamite".

In the first scene in Jerry's kitchen, George takes a unopened box of Chinese food from the fridge. A second later, the box in George's hand is suddenly open.

When Elaine takes George's toupee off his head and runs to the window to throw it out, you can hear Jason Alexander laughing aloud.