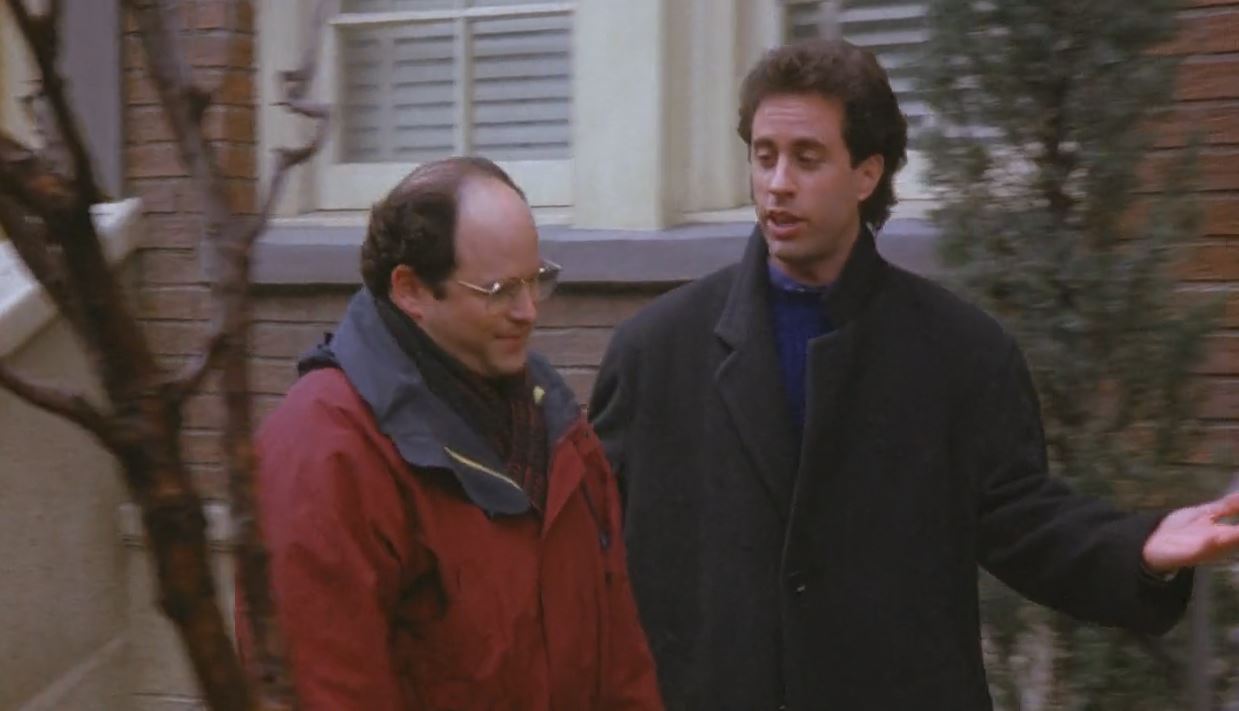 Elaine's friend, a physical therapist, whom Jerry must "kiss hello," has an old style hairdo, that Jerry and Elaine want Kramer to comment on. Jerry's grandmother wants him to open a ketchup bottle and she tells a story about some money that Uncle Leo was supposed to give his sister. Jerry's father is anxious to collect the money and interest Leo owes. Kramer puts tenant pictures up in the lobby and soon Jerry is giving every woman in the building, the "kiss hello"; however, when he stops, he becomes unpopular. George gets his arm looked at, misses a follow up appointment and must pay for that visit. The therapist skips out on her patients, including George, and goes skiing with Elaine. After their trip, she drops Elaine off 3 blocks from her apartment. Elaine injures her shoulder carrying her equipment home, and can't get any complementary treatment. Jerry gets proof of his uncle's dishonesty.

George: I love these people. You can't ask them questions. They're so mentally gifted that we mustn't disturb the delicate genius unless it's in the confines of an office. When huge sums of money are involved then the delicate genius can be disturbed!

Jerry: I'll tell you another thing, Cosmo Kramer or whatever you want to be called, the kissing thing is over. There's no more kissing and I don't care what the consequences are!

Jerry: I'm going on record right now that was my last kiss hello. I am getting off the kiss program with her.
Elaine: Why?
Jerry: Well, frankly, outside of a sexual relationship, I don't see the point to it. I'm not thrilled with all the handshaking either, but one step at a time.

George: (to secretary) Will that be cash or check?

Jerry: You don't flamenco on the first date.

Jerry: If you could say touch her breast is part of the kiss hello, then I think I could see the value in it a little bit better.
Elaine: How about an intercourse hello? How would that be?
Jerry: Elaine, now you're just being ridiculous.

Kramer: You don't rob someone if you know their name!
Jerry: You're robbing me.

The episode features the first male-on-male kiss on Seinfeld.

This is the last episode written by Jerry Seinfeld.

When Jerry asks Elaine if Wendy is coming over, he takes off his jacket twice.

When you see the picture Kramer took, Jerry is looking from the right side, but when Kramer actually takes the picture, Jerry is turning to his left side.

Kramer photographs Gerry with a Polaroid camera which takes pictures sized 3.1 in x 3 in with a border, saying later that he "took a double print". The photograph which he puts up in the lobby appears to be a 7 in x 5 in and has no border. It is not possible to take a double print from a Polaroid, which has no negative.