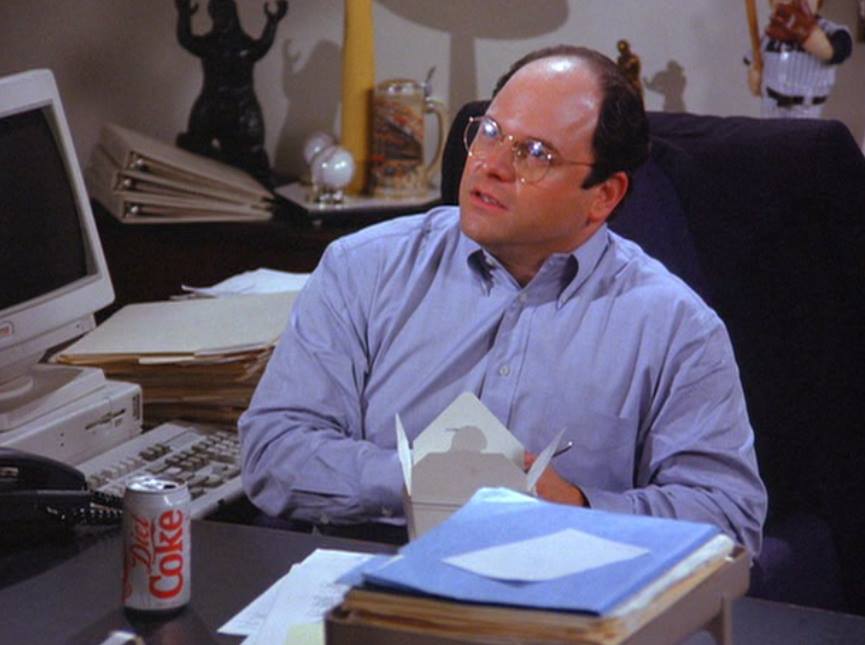 It's the kung pao! George likes his chicken spicy.

The guys play a game of basketball with "the Jimmy," a man who talks about himself in the third person. Jimmy sells odd shaped training shoes and George is an interested investor. Fresh from the gym, he attends a Yankees meeting about thefts, during which he sweats profusely. Jerry goes to the dental office and discovers they now carry Penthouse in the waiting room. Elaine gets tickets to a benefit for the AMCA (Able Mentally Challenged Adults) featuring Mel Torme, the "Velvet Fog." Elaine tries to meet a handsome guy at the gym, but instead talks with "the Jimmy," who makes the date for himself. On a follow-up visit to the dental office, Jerry feels the dentist and his hygienist may have lived out a fantasy during his time in the chair, the type of thing you might read in Penthouse. Kramer has a visit to the dentist complete with Novocain, later while wearing a pair of Jimmy's shoes, winds up getting a him a seat at the main table of the benefit.

Elaine: You know, just admitting a man is handsome doesn't necessarily make you a homosexual.
George: It doesn't help.

Jerry: Elaine, you will appreciate this. I'm sitting in Tim Whatley's waiting room, he's got a Penthouse right out on the table.
Elaine: Penthouse?
Jerry: Yeah! What is that? I mean, isn't that sick? I'd be embarrassed to have that in my apartment.
Kramer: So, what's wrong with that?
Jerry: He's a doctor! I mean, it's supposed to be, like, a sterile environment.
Kramer: So... did you take a look?
Jerry: Of course.... but that's got nothing to do with it.

Mr. Wilhelm: You're a terrible liar, George. Look at you, you're a wreck! You're sweating bullets.
George: It's the Kung Pao. George likes his chicken spicy.

Jerry: Don't you see what's happened? He couldn't talk, he's wearing these shoes, he's drooling.
Kramer: What?!
Elaine: He thinks you're mentally challenged!
Jerry: Well... you know.
Elaine: Well, what happens when you show up? He'll see that you're not.
Jerry: Not necessarily, because...

Elaine: (to Jerry) So you were violated by two people while you were under the gas. Big deal! You're single.

Jerry: You said, "George likes spicy chicken."
George: No I didn't.
Elaine: Yes, you did. You said, "George likes spicy chicken."
Jerry: You're turning into Jimmy.
George: George is getting upset!
Jimmy: Hey, look. Hank's got a new boyfriend. Jimmy's not threatened by Hank's sexuality. Jimmy's happy for Hank.
Elaine: Elaine once tried to convert one, but Elaine's not going through that again.

Kramer: (on the adult dentist's office) When he pulls that needle out, I let the expletives fly!

During the original broadcast of this episode, Mel Torme got double the exposure. Directly after the fade out of the scene in which Mel sings "When You're Smiling" to Kramer, viewers saw an extreme close-up of Mel's face as a commercial for Mountain Dew came on with him singing "I Get a Kick out of Dew".

Starting with this episode, George would occasionally refer to himself in the third person.

The shoes that Jimmy sells really did exist. They were sold through Otomix fitness equipment in the 80s and 90s.

When Kramer and Mr. Deensfrei get into the taxi, it is 1980s Dodge Diplomat. In the next shot of them driving through traffic, the car they are in is a 1994-1995 Chevrolet Caprice.

Kramer says that when he met the man in the cab, he had just come from "The Y" (YMCA). However, when the outside of the health club is shown, the sign says "New York Health Club."

In the first scene in Jerry's apartment, when Kramer walks in he closes the door. However, later in the scene the door is open.

When Kramer is wearing the special shoes in Jerry's apartment with his feet up on the coffee table, in one shot you can see the brand name, "Strength" on the soles, but in other shots, the name is covered with red tape.