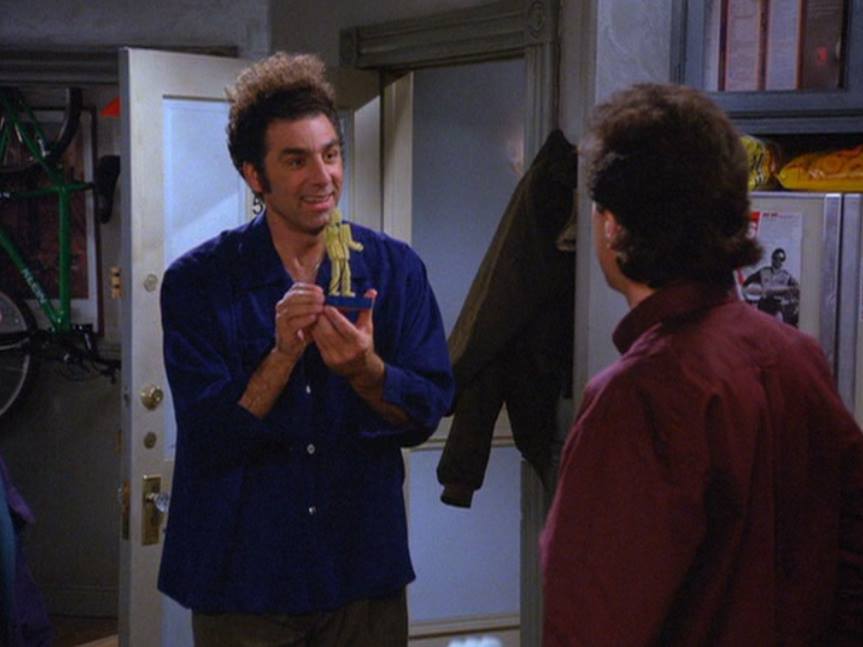 There you go, buddy. It's Fusilli Jerry!

Estelle is getting an eye job. Kramer gets his new license plates from the DMV, but the plates say "ASSMAN." Jerry is disturbed when he finds out his mechanic used his "move" on Elaine while making love to her. Kramer makes a statue of Jerry out of fusilli pasta and he makes the most of his new license plates. Jerry confronts his mechanic and later requires his services. Frank becomes the unwitting victim of one of those "freak" accidents proctologists are always telling stories about.

George: So, did you get your new plates?
Kramer: Oh...yeah. I got my new plates. But they mixed them up. Somebody got mine and I got their "vanity" plates.
George: What do they say?
Kramer: Assman.
Jerry: Assman?
Kramer: Yeah, Assman, Jerry. I'm Cosmo Kramer: the Assman!

George: (to his mother re-entering the dating scene) You're not 'out there.' I'm out there, and if I see you out there, there isn't enough voltage in the universe to electroshock me back into coherence.

George: (about pleasuring his girlfriend) Give me a moan, something. I'd settle for a belch, for God's sake.

Kramer: It's Fusilli Jerry! It's made from fusilli pasta. See the microphone?
Jerry: When did you do this?
Kramer: In my spare time. You know, I'm working on one of you George. I'm using ravioli. See, the hard part is to find a pasta that captures the individual.
Jerry: Why fusilli?
Kramer: Because you're silly. Get it?

DMV lady: Cosmo Kramer. You are the Assman.

Jerry: I just can't see you with a mechanic.
Elaine: Oh, yeah. Right, right. All those mechanics do is work all day with their hands and their big muscular arms on machines, and then they come home dripping with animal sexuality like Stanley Kowalski. What a huge turn-off that is.

Jerry: You know what a good mechanic is worth? You can't compare that to sex.

Kramer: (reading from a note left on his car with the ASSMAN plates) Call me. 36-24-46. I think I have what you're looking for.

Jerry: (about David Puddy) So he stole my move, and he's using it on Elaine.
George: You told David Puddy your move and you didn't tell me? I need a move. You know I have no moves, Jerry! I can't believe you're hoarding sex moves. I'm out there rubbing two sticks together while you're walking around with a Zippo!

Frank: I worked out with a dumbbell today. I feel vigorous!

Jerry: We were in the garage. You know how garages are. They're conducive to sex talk. It's a high testosterone area.

George: (to his Mother) I think we really need to be in front of the television set. You take TV out of this relationship, it is just torture.

Jerry: I took her to this other place. I think they might be trying to screw me.
George: Well, of course they're trying to screw you. What do you think? That's what they do. They can make up anything. Nobody knows. (imitates mechanic) "By the way, you need a new Johnson rod in there." (imitates customer) "Oh, a Johnson rod. Yeah, well, you better put one of those on."

Kramer: Have you ever met a proctologist? They usually have a very good sense of humor. You meet a proctologist at a party, don't walk away. Plant yourself there because you will hear the funniest stories you've ever heard. See, no one wants to admit to them that they stuck something up there. Never. It's always an accident. Every proctologist story ends in the same way... 'It was a million to one shot, doc, million to one.'

Driver: (to Kramer driving by with Estelle) The Assman's in town!

Nancy: Ow! George, what are you doing?
George: You know...pleasuring you.
Nancy: Well stop it!
George: You don't like the move?
Nancy: No, I don't. It feels like aliens poking at my body.

The first appearance of David Puddy.

At the start of the episode, Jerry comments that David Puddy is his friend. However, throughout the rest of the series there is no evidence that Jerry and Puddy are friends. It seems that they only know each other casually through Elaine.

After Frank falls on the fusilli Jerry sculpture and it gets lodged in his backside, we see Jerry holding the sculpture's base. (Apparently, there is a deleted scene which shows Jerry picking up the base.)