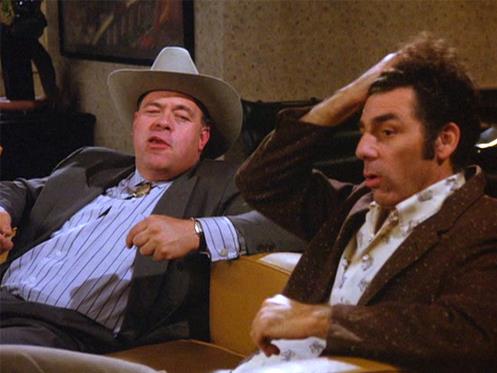 Looks like you're in the hole thirty two hundred dollars. Will that be cash or check?

After his quick trip to Ithaca, Jerry plans to meet a super model at an airport club, but his assistant, Katie, makes the trip a nightmare. Elaine says she will quit working for Mr. Pitt, but finds out that she's going to be in his will. She becomes a suspect when he overdoses his medication. George tries to prove to his boss that he is not a racist, when he says his boss looks like "Sugar" Ray Leonard. To prove it, he tries to find anyone who's black that will be his friend. While at the airport club, Kramer meets a rich Texan with whom he starts making bets. Kramer hasn't gambled in three years and when he begins to lose, he calls in Newman for reinforcement.

Jerry: What's this little scam the airlines have goin' now with these special clubs? Hundred fifty dollars a year to sit in a room, eat peanuts, drink coffee and soda, and read magazines. Excuse me, but isn't this the flight? I already got four hours of this comin' to me... What am I paying for? How bout' an 'I got all my luggage club'? Can I get into that club? Where is that club? I would like to join that club. Airlines love to divide us into classes. You know like when you're sitting in coach, the stewardess always closes that stupid curtain. Always gives you that look, like, maybe if you would work a little harder...

Jerry: (to Bridgette) I'll meet you at the Diplomat's Club. I'll be the one without the big red sash.

George: Well, I wanna put a picture of me and my boss Mr. Morgan up at the office.
Jerry: What for?
George: They're reorganizing the staff, and I'm on thin ice with this guy as it is.
Jerry: Isn't putting this guy's picture on your desk a little transparent?
George: It better be.

Katie: Jerry, listen, just so you know, before we take off they're gonna tell us what to do in the vent of a crash-
Jerry: Yes, I know. I've flown before.
Katie: Oh good. I just didn't want you to freak out... The chance of a crash is very slim. Do you have to go to the bathroom?

The World Trade Center twin-towers are visible in one scene.

In an attempt to prove that he had black friends, George tracks down characters from two previous episodes. He first tries to watch another rented movie with Joe Temple, with whom he watched the film Breakfast At Tiffany's in "The Couch", and then he then invites out Karl the exterminator from "The Doodle".

This episode won the 1995 Emmy Award for Outstanding Individual Achievement in Editing for a Series - Multi-Camera Production.

For his performance in this episode Jerry Seinfeld received a 1995 Emmy nomination for Outstanding Lead Actor in a Comedy Series.

During the "Son of Sam" discussion Newman says, "I took over his route. And boy, were there a lot of dogs on that route." When Earl replies, "Any of 'em talk to you?" he is making a reference to when David Berkowitz (Son of Sam) made the claim that he was commanded to kill by his landlord's evil dog.

When Earl accused Kramer of cheating, he tore up the traveler's checks, which would be like tearing up cash.