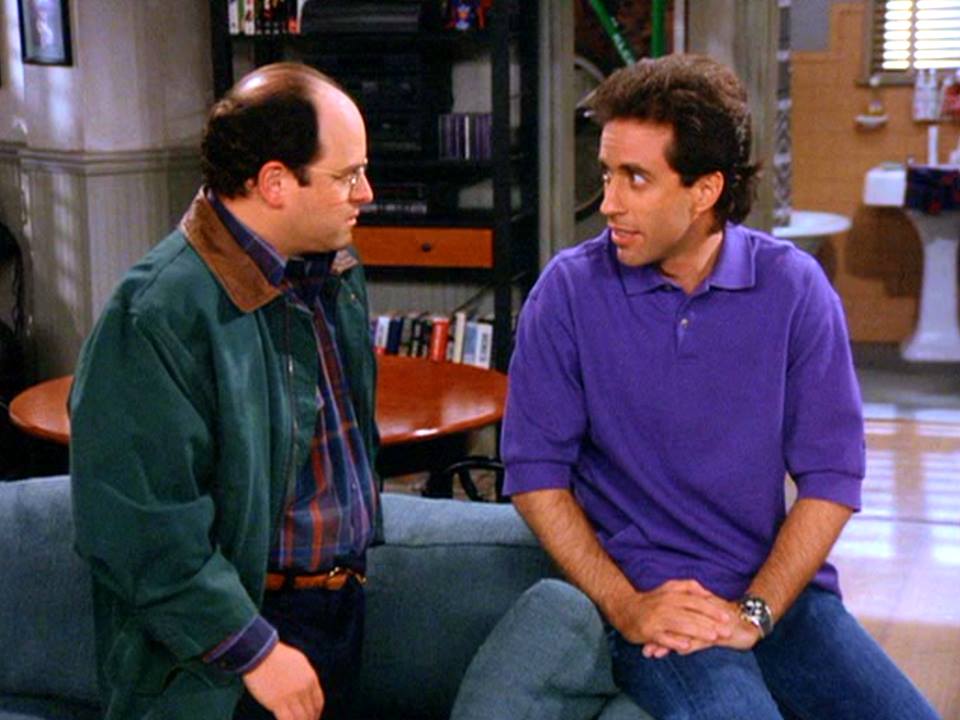 That's a pretty big matzoh ball hanging out there.

George and his girlfriend discuss toilet paper and he is in love. Elaine's boyfriend paints his face and his behavior at a hockey game disturbs Jerry, Elaine and a passing priest. A monkey throws a banana peel at Kramer, when he throws it back, the monkey becomes depressed and the zoo demands an apology. George tries to tell his girlfriend that he loves her, but her reaction surprises him. Jerry refuses to give the "necessary" follow-up courtesy thank you for the hockey tickets and Kramer is outraged.

Jerry: There's plenty of time for him to call and give us the tickets.
Kramer: You stubborn, stupid, silly man!

George: You can't have a relationship where one person says 'I love you,' and the other one says 'I'm hungry, let's get something to eat.'
Jerry: Unless you're married...
George: Now she thinks I'm one of these guys that loves her. Nobody wants to be with somebody that loves them!
Jerry: No, people hate that.

Jerry: Kramer, you threw a banana peel at a monkey??
Kramer: Well, he started it!

Mr. Pless: (about the monkey) Mr. Kramer, he's an innocent primate.
Kramer: So am I!

Puddy: (to the priest) We're the Devils!

Jerry: Who are these nitwits that get on a plane with nothing to read? You know who these people are?
Elaine: Who?
Jerry: These are the people that want to talk to you. They got nothing else to do, why not disturb you?
Elaine: I will never understand people.
Jerry: They're the worst.

Clips of David Puddy in his face paint while acting out his support for the Devils are routinely shown at New Jersey Devils home games.

Mark DeCarlo plays a character named Alec Berg. Alec Berg is the name of one of the show's writers and executive producers.

Not long after this episode was broadcast, the New Jersey Devils won their first Stanley Cup. They would win it again in 2000 and 2003.

Storywriter Fred Stoller appears in an uncredited cameo as one of the fans in the second row behind the gang at the hockey game. Kenny Kramer (the real Kramer) is also seen sitting next to Fred wearing a Rangers jersey.

The hockey game is at Madison Square Gardens, however the siren plays when the Devils (the away team) scores. Not likely.

36-year-old Puddy would have been 20 years old when the Devils moved to New Jersey in 1982. Therefore, he couldn't have been watching them from when he was a kid.