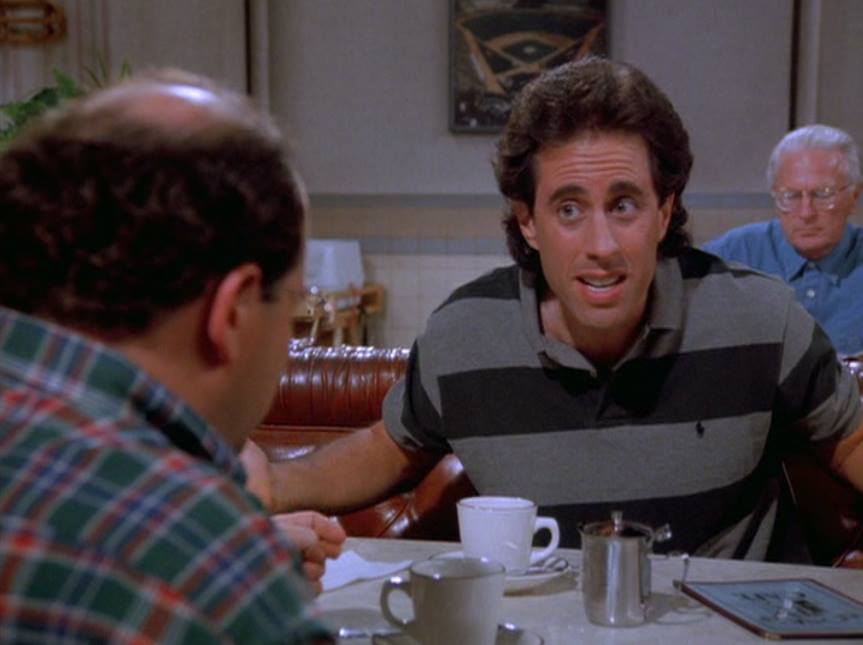 What kind of lives are these? We're like children. We're not men.

Jerry and George reevaluate their relationships with women, so they make "a pact" to change their ways, though Jerry doesn't know it. Elaine has a problem sleeping in her new apartment because of a nearby constantly barking dog; Kramer recommends a solution. George gets back with Susan, his former girlfriend from NBC; he asks her to marry him, and after a couple hours of convincing she says yes. Kramer, his solution (Newman) and Elaine commit a dognapping and take the dog far out of the city. Jerry breaks up with his girlfriend again; however, George is now trapped in his relationship with Susan, almost to the point where he is married already. Elaine almost gets a good night of sleep.

George: I'm much more comfortable criticizing people behind their backs.

Newman: What took ya so long?

(George is playing chess with his girlfriend, Alice.)
George: Well, you got no place to go. I'll tell you what your problem is. You brought your queen out too fast. What do you think? She's one of these feminists looking to get out of the house? No, the queen is old fashioned. Likes to stay at home. Cook. Take care of her man. Make sure he feels good.
Alice: Checkmate.
(Short silence)
George: I don't think we should see each other anymore.

(about George asking Susan to marry him)
Jerry: And she said yes?
George: Well, it took a couple hours of convincing, but I was persistent.

Elaine: There is this dog in the courtyard across from my bedroom window that never, ever stops barking. I lost my voice just screaming at this thing. I can't sleep. I can't work. I mean, I just moved. I can't move again. What am I gonna do? What? What am I gonna do?
Kramer: Well, there is something you can do.
Elaine: What? Kramer, I'll do anything.
Kramer: Well, what if there should be an unfortunate accident?
Jerry: You're gonna rub out the dog?

(talking to Estelle on the phone)
Susan: Hello?
Estelle: Congratulations!
Susan: I just want you to know that I love your son very much.
Estelle: Really? You do? May I ask why!?

George: You know, it was really very wrong of you to back out on that deal.
Jerry: I didn't make a deal, I just shook your hand.
George: Yeah, well that's a deal where I come from.
Jerry: We come from the same place.

Newman: (singing) How much is that doggy in the window?
Elaine: Will you two shut up?!
Kramer: Is that a new song?

Kramer: You started wondering, "Isn't there something more to life?"
Jerry: Yes!
Kramer: Well, let me fill you in on something: there isn't.
Jerry: There isn't?
Kramer: What were you thinking, Jerry? Marriage? Family?
Jerry: Well . . .
Kramer: They're prisons! Man made prisons! You're doing time! You wake up in the morning: she's there. You go to bed at night: she's there. It's like you have to ask permission to use the bathroom.

When Newman is arrested in his part in the dognapping, he says, "What took you so long?" This is the same thing David Berkowitz (Son of Sam) said when he was arrested. In an earlier episode, "The Diplomat's Club", Newman revealed he used to double date with Berkowitz, and was the one who took over his mail route.

Julia Louis-Dreyfus actually shouted herself hoarse while filming the scene where she is yelling at the dog. Rather than postpone filming they decided to write her laryngitis into the script, which is why Elaine speaks hoarsely throughout the entire episode.

This is the first episode that doesn't start with Jerry doing stand-up.

In a deleted scene a police officer gives Kramer a ticket during the dog heist. The same man (Gary Yates) plays the security guard in "The Maestro".

Jerry asks George if Susan's skin has "a pinkish hue?" and George says yes. George first mentioned he likes a pinkish hue in "The Fix-Up".

The man that Jerry is talking to as he's leaving the theatre after seeing Firestorm is "Maroon Golf" from the "The Puerto Rican Day".

Jerry and George are supposed to go see Firestorm at night, but when the outside of the theatre is shown, it's clearly daytime.

When Elaine first enters Jerry's apartment complaining about the dog, a mic is seen above Elaine for a couple of seconds.

At the very end of the scene where George and Jerry make their pact to "make some changes," the shadow of a boom mike sweeps over Jerry's hair.

When George is sitting on a bench, at the point where he gets up and runs, you can see Santa Monica Pier written on the support of the bench.

When Elaine, Kramer and Newman are taken to the police station, the exterior shots of the police car are of a 1994 Chevrolet Caprice, but the interior shots are of the older, square body style.

When Jerry says, "I have a real problem with shushing!" his arms are spread and his coffee is on the table. In the next shot, he is holding his coffee near his face.