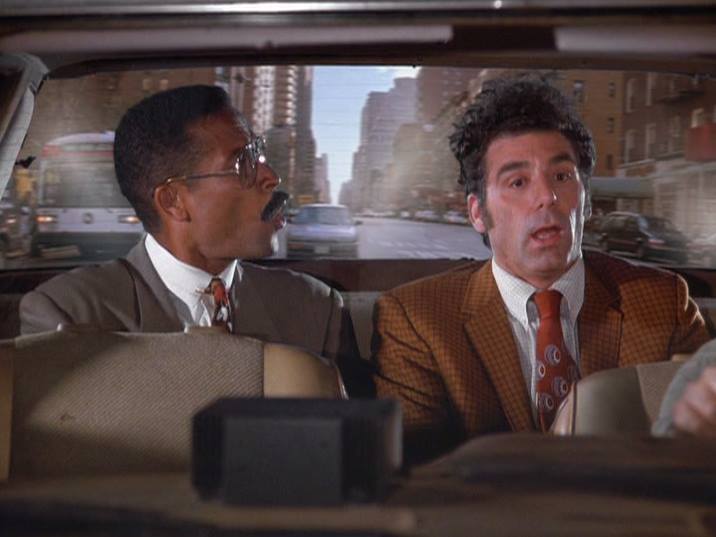 George is feeling the pressures of his relationship with Susan and decides that he needs to help a security guard that works at her uncle's store. Kramer's friend "Maestro", makes a comment about getting a rental property in Tuscany that makes Jerry decide to do some research. Elaine begins dating the "Maestro." Kramer's out of court settlement in his lawsuit against the coffee house, free coffee at any location around the world, gets him "hopped up on the caffeine." Jerry asks Poppy about Tuscany and is referred to Poppy's cousin, who makes him an offer he can't refuse.

Elaine: Did you know that Mozart died while he was writing The Requiem?
Jerry: Yeah, everyone knows that; it was in Amadeus.

Ted Lange, Michael Dorn and Michael Boatman are among the actors that auditioned for the part of Jackie Chiles.

Phil Morris makes his debut as recurring character Jackie Chiles. He had previously worked with the Seinfeld as the spokesman for Dinkins in an alternate ending of Season Five's "The Non-Fat Yogurt" episode. Since Giuliani won the election, his scenes never aired.

When the waiter comes over and Elaine and the Maestro set their wine glasses down, the wine is still in the next shot. Then, the distance between the glasses keeps changing without anyone touching them.

When Jerry asks Mr. Ciccio if there are any houses to rent, Ciccio has just exhaled a large puff of cigar smoke. In the next shot, the air is clear.

Notice when George is asking the security guard about having a chair. If you look in the background you'll see the same guy walk by twice from the right to the left.