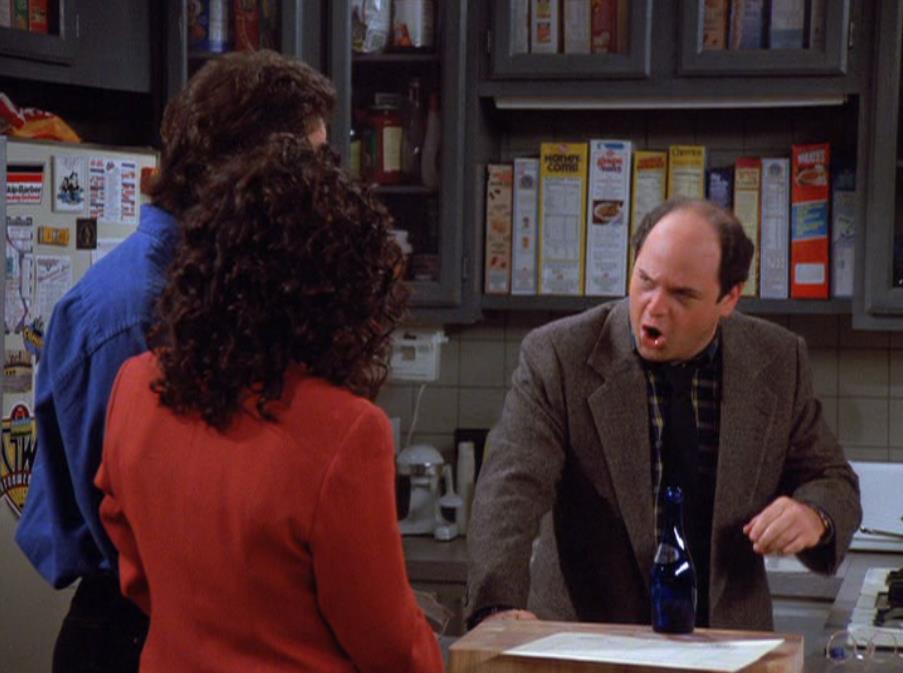 Elaine gets a blind date with the guy from her wake-up service; the only problem is he likes dogs. A bit of grapefruit pulp, from Jerry's healthy breakfast, gets into George's eye and causes problems for him when his winks keep getting misinterpreted. Jerry's healthy diet conflicts with his dating of Elaine's cousin. Kramer promises a sick boy, that New York Yankee, Paul O'Neill will hit two home runs for him, so he can get back a birthday card that he sold based on George's wink.

Elaine: (on the street with the dogs) I'm a nice person, don't believe what you hear.

Jerry: Hey! I eat healthy, if I have to take out an eye, that's the breaks.

Holly: Do you always stuff meat in your pocket?
Jerry: Uh, sometimes I use the sofa.

Jerry: You spent the night at James's? Did we?
Elaine: Yeah but we reversed positions so there was no funny business.
Jerry: Reversed positions?
Elaine: Yeah, you know, head to toe.
Jerry: So what your genitals are still lined up.
Elaine: No, because I slept with my back to him.
(long pause - no comment from the guys)

Jerry: I still can't believe you're going out on a blind date.
Elaine: I'm not worried. It sounds like he's really good looking.
Jerry: You're going by sound? What are we, whales?

George: I'd rather date the blind. You know, you could let the house go, you let yourself go. A good looking blind woman doesn't really know you're not good enough for her.
Elaine: I think she'd figure it out sooner or later.

Kramer: Two? Sure kid, yeah. But then you gotta promise you'll do something for me.
Bobby: I know. Get out of this bed one day and walk again.
Kramer: Yeah, that would be nice. But I really just need this card.

Jerry: Hey, salad's got nuttin' on this mutton.
Holly: That is so funny, did you just make that up?
Jerry: I wish I could take credit for it. It's actually a line my butcher uses when we're chewing the fat.

Elaine: So, basically what you're saying is that ninety-five percent of the population is undateable?
Jerry: Undateable!
Elaine: Then how are all these people getting together?
Jerry: Alcohol.

Holly: So, is the beef the way you like it?
Jerry: I usually like mine with an angioplasty.

Elaine: Thanks for mutton.

Elaine: Veggie sandwich and a grapefruit? What are you turning into?
Jerry: A healthy person.

During the closing scene, George Steinbrenner runs through the names of Yankee Managers he had let go. Steinbrenner ended by naming Buck Showalter, adding "...but you didn't hear that from me." Showalter indeed would be let go as Yankees Manager by Steinbrenner two weeks after the episode's original airing.

At the beginning of the episode, James the wake up service voice was actually the star of "Game of Thrones", Peter Dinklage.

The promise to have Paul O'Neill hit two home runs is borrowed from the movie "The Pride of the Yankees".

When Kramer is talking to Paul O'Neil in the Yankees clubhouse O'Neil is buttoning his uniform shirt. A few seconds later we cut back and he is buttoning it up again.

Elaine is supposed to be running away from dogs, but in one shot one of the dogs has passed her.