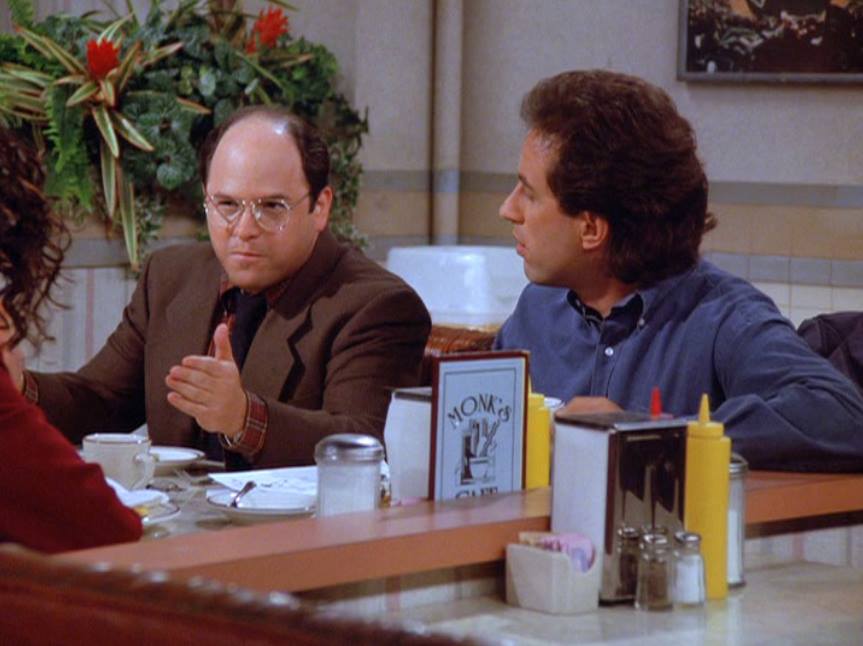 When you look annoyed all the time, people think you're busy.

George picks up a bad habit from some visiting baseball officials. During the time of the New York City Marathon, Elaine has an out of country runner as her house guest. The runner had overslept and missed the big race at the last Olympics and Jerry obsesses with ensuring that it doesn't happen again. Kramer gets a hot tub from his friend Lomez and Elaine has writer's block.

George: When you look annoyed all the time, people think that you're busy.

Jean-Paul: This son-of-a-bitch is ICE cold!

Jerry: What happened to your mental alarm?
Kramer: I guess I hit the snooze.

Clayton: ...speak up George, I can't hear you!
George: You tell that son-of-a-bitch that no Yankee is ever coming to Houston; not as long as you bastards are running things!
(Mr. Wilhelm walks by right as George curses)

Kramer: No I'm telling ya, it's great; I opened up all the windows; the air is cold, the tub is boiling-hot; it's like Sweden, man. Sweee-den!

George Steinbrenner: We all get a little cuckoo sometimes, George. I used to be like you. Berating personnel until they cried, calling managers on the field during a game, threatening to move the team to New Jersey, just to upset people. Then I found a way to relax. I've got two words to say to you, George... Hot Tub!

The winner of the 1995 New York City Marathon was German Silva of Mexico in a time of 2 hours and 11 minutes.

This episode marks the first time Kramer mentions his friend Lomez. He also mentions Lomez in "The Package", "The Fatigues", "The Slicer", "The Betrayal" and "The Apology".

Kramer says, "the water went down to 58 degrees". However, in the previous scene the thermometer reads 52 degrees.

When Judy opens the door to confront Elaine, it starts to close, then is swung open again by an unseen hand.