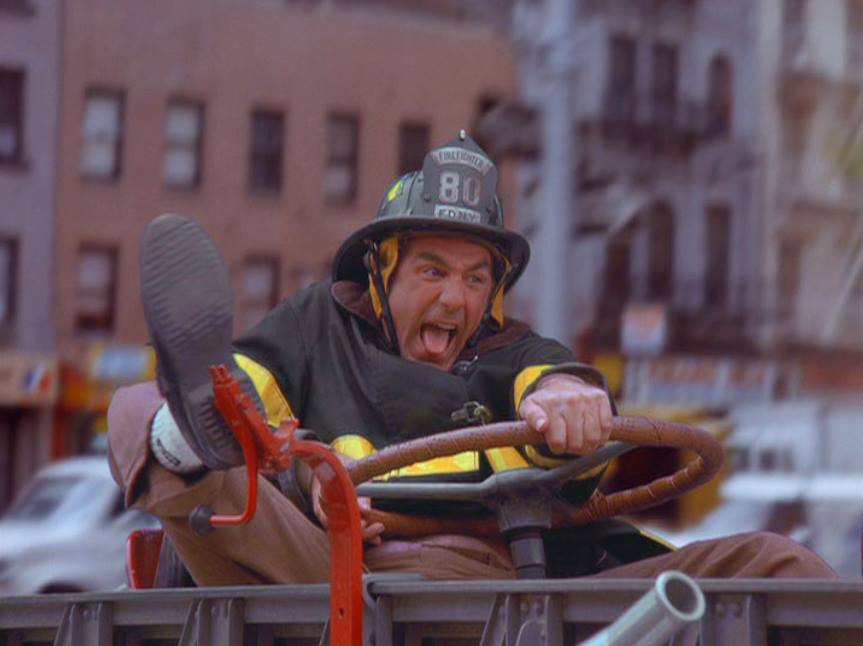 Don't worry, cap, I can handle it!

George tries to keep his ATM code a secret from Susan. Elaine is puzzled by a man she once met at a party and talked to for ten minutes, doesn't remember her, but he does remember other party details. Leapin' Larry, a one-legged man, wants Jerry to do spots for his store, but he is angered when he thinks Jerry is doing an impression of him. Kramer gets an emergency band scanner and decides to help reorganize operations at the NYFD. Elaine doesn't want to go on a date with her boss, the storyteller, so she leaves Jerry and George at the restaurant. Jerry escapes, but George isn't as lucky. He is forced to accompany Peterman to his Momma's house, where he winds up staying all night and tells her his secret code before she dies. That is her last word. George's code is needed in a life or death situation.

George: I am not giving my code to anyone, for any reason!
Jerry: What if my life depended on it?
George: If you're in some situation where some fast cash will save your life, I'll give you the code.

Kramer: Well, you just joked yourself right out of that commercial, didn't you, munjamba.

George: I reached down... and there was nothing there!

George: Where are we gonna eat?
Jerry: We're gonna meet Elaine and Peterman at the Chinese place.
George: Peterman? Nobody mentioned anything about Peterman.
Jerry: Of course not, if I did, would you have gone?
George: No way.
Jerry: There you go.
George: I don't even know Peterman. How the hell am I gonna relax? I'm gonna have to be on all night. I don't like being on, Jerry, I would much rather be off.
Jerry: Trust me, you're off.

Kramer: ...you're a portly fellow... a bit long in the waistband? So what's your pleasure; is it the salty snacks you crave? No, no, no, no... your's is a sweet-tooth. Oh, you may stray, but you'll always return to your dark master: the cocoa-bean!

Jerry: I gotta go down to Leapin' Larry's.
Kramer: Oh, so he took you back?
Jerry: Yeah, we straightened it out. All is forgiven.
Kramer: Well, you know the important thing is that you learned something.
Jerry: No, I didn't.

George: Why does everything have to be 'us'? Is there no 'me' left? Why can't there be some things just for me? Is that so selfish?
Jerry: Actually, that's the definition of selfish.

Peterman: You're obviously lying George, anyone can see that.

The Firehouse in this episode, #8 Firehouse in the Tribeca section of New York City, is the same firehouse that was used for exterior shots in both "Ghostbusters" films.

We find out that the J. in J. Petermen's name stands for Jacopo. We also find out he grew up in Costa Rica.

During the first exterior shot of the diner, the first "E" in "restaurant" is not lit.

From the outside, the restaurant where Jerry and George meet Peterman is the same restaurant as in Season 2's "The Chinese Restaurant," Hunan 5th Ave. However, the inside is completely different from the one shown in that episode. Maybe they renovated?

While trying to get the secret code out of George, Jerry says the line "sing it sister". He'll later reuse this line in "The Dealership".

Kramer is driving the rear end of the hook and ladder fire truck. However, the shot of the truck going down the street is a straight ladder truck.

When Kramer is visiting the firehouse, the overhead PA identifies the fire company as "Engine Company 390". In subsequent scenes of firefighters set on the fire truck, their helmets identify them as Company 80.