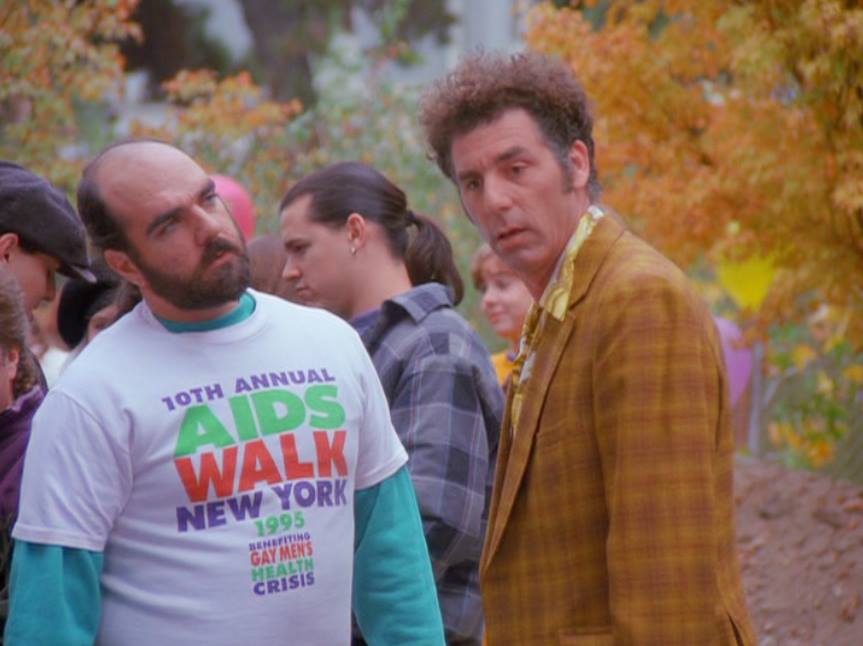 Jerry finds the number of girl he wants to contact on Kramer's AIDS walk sponsor list. After finding out that her preferred method of birth control is only available in a limited supply, Elaine must decide whether her current boyfriend is "sponge worthy." George tells Susan the secret of the size of Jerry's jeans and that leads to a fight about all secrets, he tells her another of Jerry's secrets when they make up. Jerry finds out that George told Susan one of his secrets and now he's "out of the loop." Elaine adjusts her screening process to find worthy candidates. Kramer causes a disturbance at the AIDS walk when he won't "wear the ribbon".

George: That condom killed me. Why do they have to make the wrappers on those things so hard to open?
Jerry: It's probably so the woman has one last chance to change her mind.

(George is struggling to open a condom wrapper
Susan: Come on, George, just rip it open.
George: I'm trying, damn it.
Susan: Look, tear it, tear it from the side.
George: I tried to tear it from the side, I can't get a good grip, here, you gotta do it like a bag of chips.
Susan: No, here, give it to me.
George: Would you just wait a second?! Wait a second!
Susan: Will you just give it to me? Give it to me.
(She takes the wrapper from George)
George: You see? You see?
Susan: (tears open the wrapper and hands it back to George) Come on. Come on!
George: (tosses the condom aside) It's too late.

Elaine: Hey, I didn't even use one.
Jerry: I thought you said it was imminent.
Elaine: Yeah, it was, but then I just couldn't decide if he was really sponge-worthy.
Jerry: Sponge-worthy?
Elaine: Yeah, Jerry, I have to conserve these sponges.

Elaine: What does Susan use?
George: I don't know.
Elaine: You don't know?
George: I uh... figure it's something.

Roger: Yes, I believe I am sponge-worthy

Elaine: Good morning.
Billy: How'd you sleep?
Elaine: Great, and you?
Billy: Fine, fine. Everything okay?
Elaine: Yep.
Billy: No regrets?
Elaine: Nope. (Billy leans in to kiss her) What are you doing?
Billy: What do you mean?
Elaine: Oh, I don't think so.
Billy: Why not? I thought you said everything was fine.
Elaine: I wish I could help you, but I can't afford two of them.

Walk Registrar: But everyone wears the ribbon. You must wear the ribbon!
Kramer: You know what you are? You're a ribbon bully.

George: That condom killed me. Why do they have to make the wrappers on those things so hard to open?
Jerry: It's probably so the woman has one last chance to change her mind.
George: You never run out, do you?

Elaine: Run down your case for me again.
Billy: Well, we've gone out several times; we obviously have a good rapport. I own a very profitable electronics distributing firm. I eat well. I exercise. Blood tests - immaculate. And if I can speak frankly, I'm actually quite good at it.
Elaine: You going to do something about your sideburns?
Billy: Yeah, I told you, I'm going to trim my sideburns.
Elaine: And the bathroom in your apartment?
Billy: Cleaned it this morning.
Elaine: The sink, the tub, everything got cleaned?
Billy: Everything, yeah. It's spotless.
Elaine: Alright, let's go.

Two of the people annoyed at Kramer's disrespect for the ribbon are the armoire stealing "street toughs" from "The Soup Nazi" episode, and seen again later in "The Puerto Rican Day."

This is the first time Kramer is attacked by a group in an alley. The second time is in "The Foundation" when he is attacked by kids from his karate class. In both scenes, the alley looks strangely similar.

When Elaine says, "I'm going to do a hard-target search of every drugstore, general store, health store, grocery store in a twenty-five mile radius," she is making a reference to the 1993 film "The Fugitive" where Tommy Lee Jones utters a similar line.

When Kramer comes into the restaurant with the clipboard, Elaine reaches for it. In the next shot, she is already writing on it.

When Elaine stomps on George's foot, she misses and hits the floor, but he reacts to it anyway.