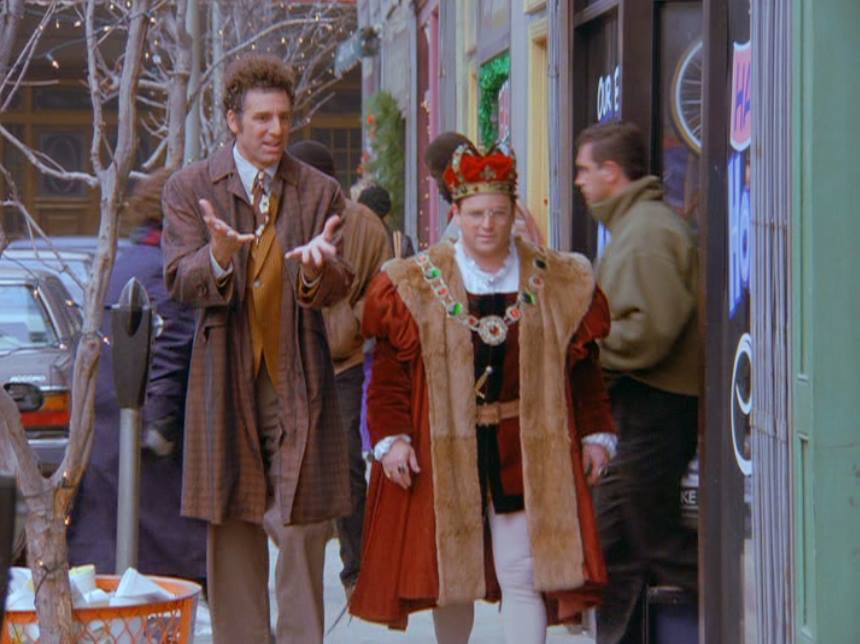 Remember, you are a king. You must project a royal bearing!

Kramer is active in the re-opening of an old movie theater. He also is keeping an eye on a friend, Lloyd, who's recovering from a nervous breakdown. Lloyd has a pack of Chinese gum that Kramer insists everyone tries. George thinks the cashier short-changed him and meets a former neighbor (who's had a breakdown) and his daughter, Deena. George lets his former neighbor look at his car. Elaine tries to avoid interacting with Lloyd, loses a button from her blouse and reveals herself to Lloyd and Kramer. Because of Elaine's lie, Jerry must wear glasses while around Lloyd. Deena tells George that she thinks he is showing signs of being on the verge of a breakdown. George's car, once owned by "Jon Voight" in "The Mom & Pop Store", catches fire. Elaine shows more to Lloyd. Jerry gets more gum. George keeps trying to convince Deena he's not crazy.

(George wants Deena's father to pay for the damages to his car)
Deena: And I suppose Lloyd Braun had something to do with it too?
George: No, not Lloyd Braun, but the cashier.
Deena: What cashier?
George: You remember the woman on the horse? She wanted my spot.
Deena: To park her horse?
George: No, she wasn't on the horse.

Kramer: Remember, you're a king, you must project a Royal bearing.

Lloyd Braun: We've really gotta get that Elaine a boyfriend.

Kramer: Now see, this is what the holidays are all about. Three buddies sitting around, chewing gum.

George: The whole time that I was growing up, all I ever heard from my mother was, "Why can't you be more like that Lloyd Braun?"
Jerry: And in the end, Lloyd Braun became more like you.

(In his car, George is waiting for the engine to warm up. Another car is waiting for him to pull out of his spot, and impatiently sounds the horn)
George: All right, all right.
(The horn sounds again)
George: Hang on, it's warming up!
(The horn sounds several more times. Fed up, George angrily gets out of his car)
George: Oh, you mother...
(He walks over to the car)
George: Hey, what is your problem?!
(The driver rolls down the window and reveals herself to be the cashier)
George: Oh, hello! It's you! Listen, lady, I got six minutes left on that meter, and I'm not budging until you admit you stole my twenty dollars. Heh-heh-heh. You're not so tough when you're not on your horse, are you, Ruthie?
Cashier: Your car's on fire.
(Her windshield reflects the flames erupting from George's car, and he dashes off back toward it)
George: Ah! Fire!
Cashier: Merry Christmas.

George: Do you think she's happy?
Jerry: Who?
George: The cashier.
Jerry: Ruthie Cohen?
George: You know her name?
Jerry: Sure.
George: I don't think I've ever spoken to her.
Jerry: Maybe that's why she's happy.

George: That cashier is riding horses on my money.
Jerry: Well, here's what I propose. Go down to the stables, snoop around, see if any high-flying cashier's been throwing twenty-dollar bills around with big lips.

Larry David: (as the street vendor) I'm sorry your majesty, but we don't accept bills with lipstick on the president.

Jerry: (to Elaine) Well, if it isn't Chesty Larue!

Kramer: (to Elaine) Yeah, well I'm sorry. The Alex is a family theater, not one of your "swing-joints"!

George: (Looking at his car after it caught on fire) The Jon Voight car is no more...

George: Don't you see? He was wearing glasses to fool Lloyd Braun!

Jerry: I think I finally figured out what the flavor is in this gum. It's a little lo-meiny.

George believes that the cashier at Monk's shortchanged him, having given him change for a ten, insisting that he'd given her a twenty. This is the second time we see George in this situation as he made the same claim against a drugstore cashier in Season 3's "The Stranded."

For his performance in this episode Jerry Seinfeld received a 1996 Emmy nomination for Outstanding Lead Actor in a Comedy Series.

This is the first episode where the character of "Lloyd Braun" is played by Matt McCoy.

Larry David appears as a window guy who sells George a pack of gum.

Ruth Cohen, who played the role of the self-named cashier Ruthie Cohen at Monk's Diner, appeared in 101 episodes. However, this is the first time she had lines.

Toward the end of Jerry's opening stand-up routine, around the time Jason Alexander's credit rolls, Jerry's hands are spread out, then right in front of him.

When the lottery vendor hands George's bill back, he leans forward with his head straight down. It then cuts to a close-up and his head is tilted.

When Kramer sits down in the restaurant, he can be seen reaching into his jacket. It then cuts to a very brief shot of George and then back to Kramer, who already has his pipe out and in his mouth, and is preparing to light it.