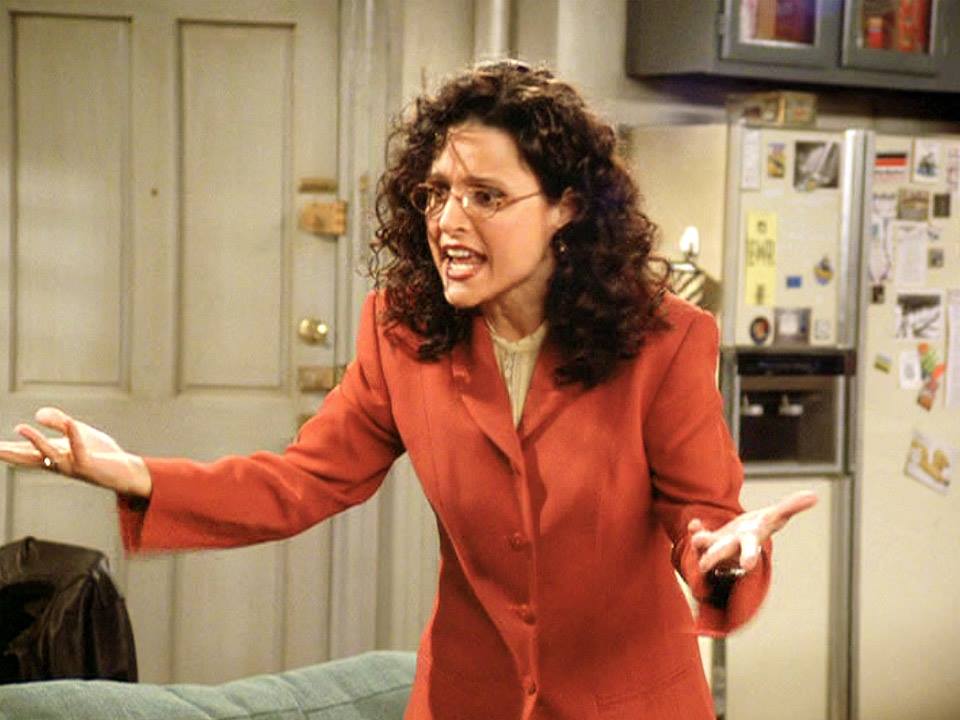 A woman is walking around in broad daylight with nothing but a bra on, she's a menace to society!

Kramer befriends a caddy, who helps him to improve his golf game and offer his other advice. George's bosses consider him for a promotion when they think he is so dedicated to his work that he is there in the morning before everyone else and still there after they all leave. They don't know that he's just been leaving his car in the parking lot waiting for his free visit from a locksmith. Taking advantage of the situation, he and Susan go up north to her parent's rebuilt cabin. Elaine meets an old rival who's heir to the Oh Henry! candy bar fortune and has never worn a bra. She wears the bra as a top and cause Kramer and Jerry to have an accident with George's car. With George's damaged car in the parking lot, the Yankees think he's dead. Steinbrenner breaks the news to the Costanza's. Kramer and Elaine take her rival to court and only Jerry may stand in the way.

Elaine: This woman has never, not once, ever, as long as I've known her, worn a bra.
Jerry: That's just shameless.

George: It is all because of that car. See, Steinbrenner is like the first guy in at the crack of dawn. He sees my car, he figures I'm the first guy in. Then, the last person to leave is Wilhelm. He sees my car, he figures I'm burning the midnight oil. Between the two of them, they think I'm working an eighteen-hour day!
Jerry: Locking your keys in your car is the best career move you ever made.

(The parody of the OJ Simpson trial)
Jackie: (to Kramer and Stan) Damn fools! Look at that! We got nothing now, nothing! I've been practicing law for 25 years; you're listening to a caddy! This is a public humiliation! You can't let the defendant have control of the key piece of evidence. Plus, she's trying it on over a leotard, of course a bra's not gonna fit on over a leotard. A bra gotta fit right up a person's skin, like a glove!

George: My presence in that office can only hurt my chances.

Jerry: You doing anything?
Kramer: Nope.
Jerry: You want to go down to the Bronx and see if there are any fliers on George's car?
Kramer: Sure!
Jerry: I could have said just about anything there, couldn't I?

Jerry: Don't you wanna tell your parents you're alive?
George: Oh, they could use the break.

Frank: (to Steinbrenner) What the hell did you trade Jay Buhner for!? He hit 35 home runs, had over 100 RBIs and had a rocket for an arm. You don't know what the hell you're doing!!!

When Elaine told about her high school boyfriend "Tom Cosley", in which Sue Ellen stole, Tom Cosley was actually the name of a guy Julia Louis-Dreyfus dated in high school.

In this episode, when Jerry mentions having to throw a rye up to a two-story window, in reference to the previous episode, "The Rye".

The court scene, and especially Sue Ellen trying on the bra, is an obvious reference to the O.J. Simpson trial and the infamous "glove."

The bra Sue Ellen attempts to try on in the courtroom is quite different from the bra she wore on the street.

Kramer and Jerry initially pull out of a car wash on Broadway and East Houston Street (Manhattan) and then crash their car at Court Street and Baltic Street (Brooklyn) a moment later. Who would notice this, other than a New Yorker?

When Stan the Caddy hears Kramer can't golf, he gets upset and waves his arms. When the scene cuts to a different angle he is standing still.

When Kramer tries to convince Jerry to testify, he waves his arms wildly and points at Jerry. His hands are immediately in a completely different position in the next shot.