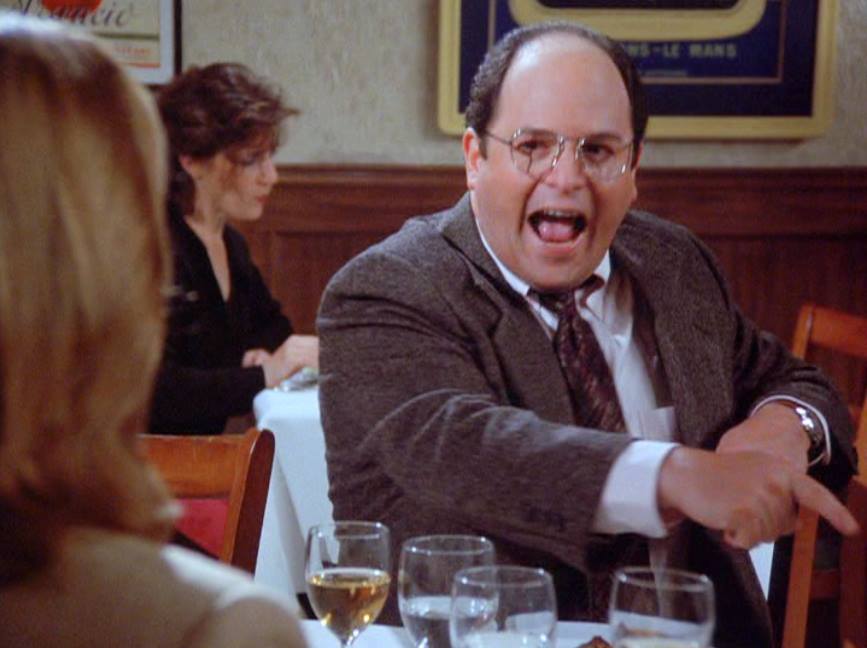 Elaine sees a girl's bike she wants, but she strains her neck trying to getting the bike down from the wall. In pain she promises the bike to whoever fixes her neck. Kramer saves the day and wants the bike. George is angry when Susan's cousin chooses to name her baby with the name he planned to give his first offspring. He desperately tries to convince them to use another name. Kramer works out an arrangement with Jerry to keep track of what he takes from Jerry's kitchen. Jerry is curious when his girlfriend is always wearing the same dress, every time they go out.

(After listening to Newman's verdict)
Elaine: What? This is your solution? To ruin the bike?

George: I defy you to come up with a better name than Seven.
Jerry: Alright, let's see... How about Mug? Mug Costanza. That's original. Or Ketchup. Pretty name for a girl.
George: Alright... You having a good time now?
Jerry: I've got fifty right here in the cupboard... How about Bisquick? Pimento? Gherkin? Sauce? Maxwell House?
George: Alright already!!

(in the maternity ward)
George: Seven!!!

Jerry: (to George) Just because your life is destroyed, don't destroy someone else's.

George: Seven's a beautiful name for a boy or a girl. Especially a girl. Or a boy.

Kramer: A wise man once taught me the healing power of the body's natural pressure points. Elaine: Ah hah. Kramer: He sells tee-shirts outside the World Trade Centre.

Jerry: I miss the days when they made toys that could kill a kid.

Jerry: Seven? Yeah, I guess I could see it. Seven. Seven periods of
school, seven beatings a day. Roughly seven stitches a beating, and eventually
seven years to life. Yeah, you're doing that child quite a service.

Jerry: (about Elaine) The only way to really help her is to just let her be.

Kramer: Are you unhappy with our arrangement?
Jerry: What arrangement?
Kramer: Well, I was under the impression that I could take anything I wanted from your fridge, and you could take whatever you want from mine.
Jerry: Yeah? Well, let me know when you get something in there and I will.

George: What names do you like?
Couple: Well we like Kimberly.
George: Eh. What else you got?
Couple: Joan.
George: Please. I'm eating here.

George thinks the name "Seven" is so unique. However, the name "Seven" had already been used four years earlier in the seventh season of "Married with Children" when they introduced the character "Seven Bundy".

The scene where Newman decides on who gets to keep the bike is based on the biblical story "The Judgement of Solomon" (1 Kings 3:16-28). In the story, King Solomon is asked to decide - between two women - who should keep a child - one being the true mother. After some deliberation, King Solomon calls for a sword. He declares that there is only one fair solution: the live son must be split in two, each woman receiving half of the child. The boy's true mother then cries out, "Please, My Lord, give her the live child - do not kill him!" King Solomon instantly gives the baby to the real mother, realizing that the true mother's instincts were to protect her child.

When Elaine and Kramer go into Newman's apartment to get his opinion on who should have the bike, Newman is wearing a wedding band. A moment later the wedding band isn't there anymore.

When Kramer sets the pen and the string down on the counter the string is taut. A moment later, it is loose.

When we see George driving to the hospital with Ken and Carrie it is dark outside. When they get to the hospital and we see an outside shot of the building it is daytime and the sun is shining.