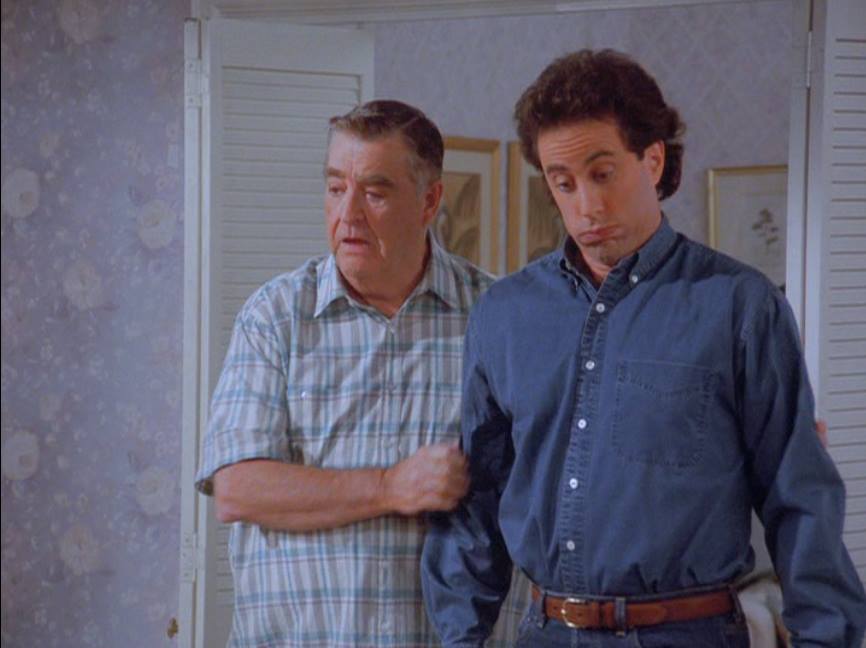 The crime there is just terrible. Do you know I got mugged for a marble rye right on the street?

Kramer continues to play with the cable guy. George's obsession with Marisa makes Susan suspicious. Elaine calls Jerry in Florida and tells him she wants to come and join him. Elaine gets George Marisa's phone number and now he needs her for an alibi (which involves her "boyfriend" Art Vandelay, an importer/ exporter). Morty's ace in the hole, to keep him from impeachment, is the woman that Jerry stole the marble rye from, only she doesn't remember him, at least at first. The cable guy zeros in on Kramer, but he gets away. George's meeting with Marisa doesn't go as well as planned and Susan thinks he's having an affair with Elaine. The cable guy concedes defeat.

Jack: Hello, Morty. Well, you missed the early bird.
Morty: Yeah, so?
Jack: Must be nice to have that kind of money.

Susan: Are you having an affair with George?
Elaine: What?! (laughs uncontrolably) Don't be ridiculous! (keeps laughing) I mean, why would anyone wanna sleep...

Jerry: Can't we eat at a decent hour? I'll treat, okay?
Helen: You're not buying us dinner.
Jerry: Well, I'm not force-feeding myself a steak at 4:30 just to save a couple bucks, I'll tell you that!
Helen: Alright, we'll wait. But it's unheard of.

There is a reference to Superman in this episode, as we see Jerry emerging from his parent's guest room reading a Superman comic.

This two-part episode was nominated for the 1996 Emmy Award for Outstanding Individual Achievement in Sound Mixing for a Comedy Series or a Special.

When Kramer is on the telephone, you can see behind him on a shelf more of his hand-made pasta-people. These have appeared in other episodes, namely "The Fusilli Jerry" and "The Understudy."

When Kramer is chased by the Cable Guy, there is an obvious product placement of Rold Gold Pretzels, in which Kramer is eating out of his grocery bag. At the time, Rold Gold was being endorsed by Jason Alexander.

The final scene in which Morty Seinfeld departs is an obvious parody of Nixon's farewell. Just like Nixon, Morty Seinfeld waves to his supporters and gets into the Cadillac. Nixon boarded the presidential helicopter in the similar fashion.

When Kramer drops his groceries in the chase the pineapple is rolling off the curb. In the next shot, it is lying on the sidewalk.