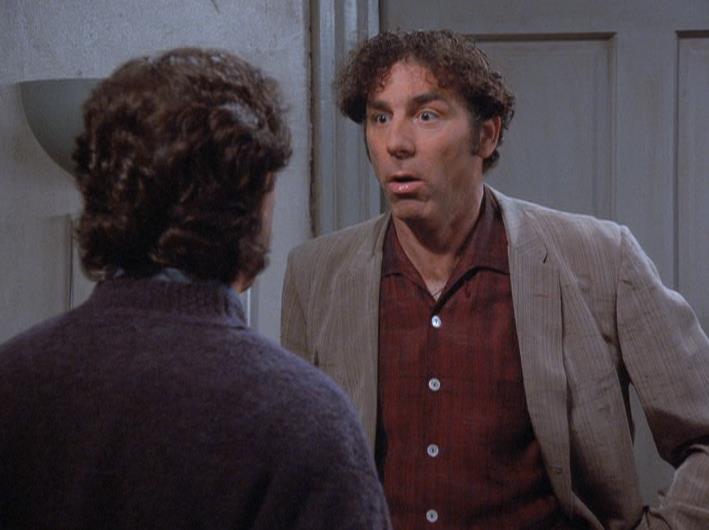 Low flow? I don't like the sound of that.

Elaine gets a physical for a pending trip with Peterman to Africa. Her physical test results show positive for opium, so Peterman fires her. Jerry parent's are in seclusion in New York while biding time until they can move back to Florida. George tries to convince his parents to move to Florida. The shower heads in Jerry's building are being replaced with a new low-flow model; Newman finds a source for black market shower heads. The Seinfelds tell the Costanzas that there is no room for them in Florida that gives Frank all the incentive he needs to move. George is delighted. Elaine finds the cause of her opium addiction and finds a donor for her next physical. Jerry makes a joke on The Tonight Show with Jay Leno at the expense of Uncle Leo and he pays the price for making fun of the family.

Jerry: (on phone) Hey, listen to this -- Uncle Leo broke up with his girlfriend because of the bit I did; she thought it was funny, so he accused HER of being an anti-Semite, they had a huge fight, and now he's moving back into his apartment! You know what this means? My parents are gonna go back to Florida! ... What? ... What number is this? ... Oh, I'm terribly sorry. (hangs up)

George: My parent's are moving to Florida!!! Do you know why?
Jerry: Why?
George: To spite your parents!
Jerry: To spite my parents? Your parents are crazy!
George: They're out of their minds!

Uncle Leo: Move back with Lydia???
Jerry: Come on, you're lucky to have anybody!
Uncle Leo: Last week you told me I was in my prime, I should be swingin'!
Jerry: Swinging?!? What are you, out of your mind? Look at you, you're disgusting! You're bald, you're paunchy, all kinds of sounds are emanating from your body 24 hours a day! If there's a woman that can take your presence for more than ten consecutive seconds, you should hang on to her like Grim Death! Which is not far off, by the way.
Uncle Leo: But she's an anti-Semite!
Jerry: Can you blame her???!!?

Kramer: If I don't have a good shower, I am not myself. I feel weak and ineffectual. I'm not Kramer.

Jerry: (about his parents) You see this? Any thought pops into their head, they're calling me because it's a local call now. I'm used to a 1200-mile buffer zone. I can't handle this. Plus, I've got the dinners, I've got the pop-in's. They pop-in! It's brutal.

Kramer: I just took a bath, Jerry. A bath!
Jerry: No good?
Kramer: It's disgusting. I'm sitting there in a tepid pool of my own filth. All kinds of microscopic parasites and organisms having sex all around me.

Newman: Now here's the lowdown. Through a certain connection, I've been able to locate some black market shower heads. They're all made in the former Yugoslavia. And from what I hear, the Serbs are fanatic about their showers.
Jerry: Not from the footage I've seen.

Peterman: Oh, Elaine...the toll road of denial is a long and dangerous one. The price-- your soul.

Del Boca Vista translates to "View of the mouth."

Not that there is a Comedy Central magnet on Jerry's refrigerator.

During the scene where Peterman throws Kramer out of Elaine's office and slams the door, note how Julia kept her eyes locked on the file cabinet and her hands over her mouth. This is because she was trying to control her laughter that was caused by Michael's antics.

The discussion between Estelle and Frank and Morty and Helen about the availability of condos at Del Boco Vista is purposely reminiscent of Jerry's conversation with the Maestro about the available homes in Tuscany.

Kramer and Newman buying black market shower heads, all laid out on a cloth, is reminiscent of the movie "Taxi Driver" (1976) in which Travis Bickle (Robert De Niro) buys a hand gun in the same fashion.

In the scene where Mrs. Seinfeld and Elaine are choosing a cup, you can occasionally see the reflection of the production crew in the glass cupboard door.

When Jerry picks up the phone to talk to his Dad, the antenna is down but in the next shot it's up.

Kramer complained that his showerhead had no pressure and he had to take a bath. In an earlier episode, Kramer said he only takes baths, not showers.

After Jerry drops his bottle of beer and it smashes, it is obvious that the bottle never contained any liquid. Both it and the floor are completely dry.