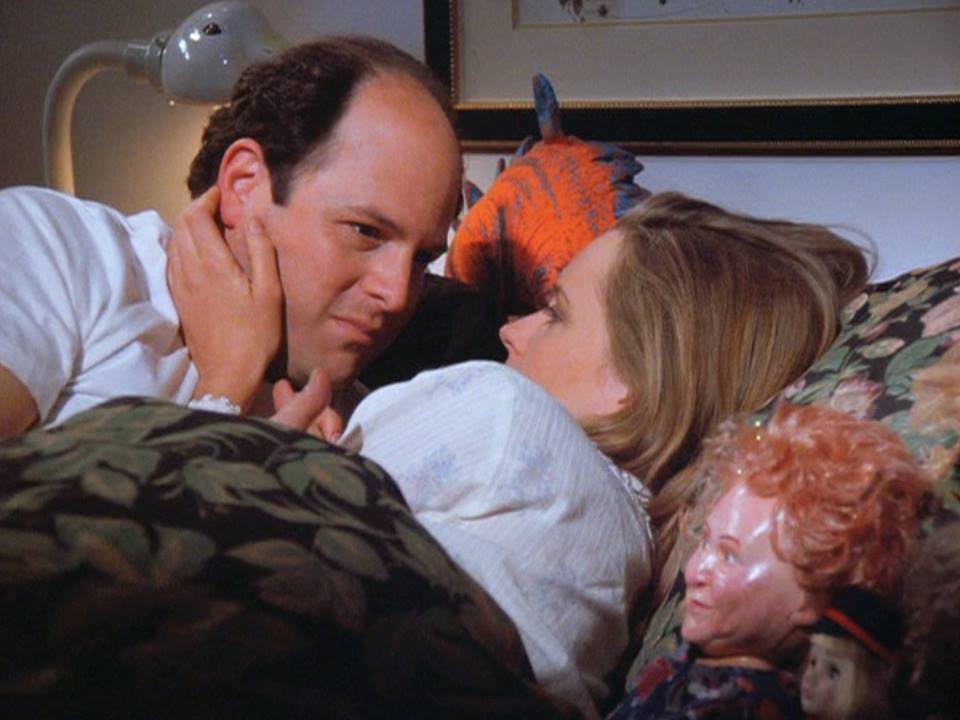 I feel like I'm in bed with my mother.

George is spooked by a doll from Susan's collection that has an uncanny resemblance to his mother. Elaine is desperate to replace an autographed picture of the Maestro's that she ruined in Tuscany. Kramer joins Frank in his new billiard room and tries to help him track down a long lost cousin. Meanwhile, Jerry's interactions with Susan's old roommate spell trouble for his upcoming appearance on the Charles Grodin show.

(Referring to the picture of the man in Tuscany named Costanza.)
The Maestro: ...he has something of a reputation of the town idiot.
Frank Costanza: I STILL say we're related.

Kramer: Jerry, why don't you do a bit on Styrofoam?
Jerry: Like what?
Kramer: What is all this stuff? Why do need this stuff? And why...do they make them so small?
Jerry: Where's the punch line?
Kramer: It's all attitude.

(George is showing Jerry the doll that looks like his mother.)
George: You see? You see?!
Jerry: (with a disgusted face) Well, it doesn't look exactly like her.
George: Jerry, come on. If my mother keeps shrinking, this is exactly what she's gonna look like in ten years!
Jerry: Why don't you just get rid of it, then?
George: I tried, I almost threw it down the incinerator, but I couldn't do it, the guilt was overwhelming. Susan's so attached to this thing.
Jerry: (as George is leaving with the doll) Well, where are you going? Don't take your dolly and go home.

(George is imagining the doll yelling at him like his mother)
Doll: Georgie, don't eat with your hands. Why do you eat so fast? You can't even taste it!
George: Don't tell me how to eat!
Doll: Still wearing that shirt? You've had it for five years already. Why don't you buy a new shirt?
George: Because I like this one!

Jerry: What the hell are you doing?!
Kramer: I'm salvaging the sauce. What's the matter with you?

When Kramer is playing pool with George's dad and switches to the Maestro's baton, he says "I've got a hunch, fat man, that I don't miss." References The Hustler and Fast Eddie Felson calling Minnesota Fats "fat man" during their marathon games.

Signs in Frank's billiard room: "If they don't have a pool hall in heaven, then I'm not goin'", "Pool is not a matter of life and death. It is much more important than that", "The life of the Pool Hustler is Hell... But somebody's got to do it", "RACK 'EM", "Pool Hall", "Professional & Amateur Hustlers", "Keep your butt and butts off the table!" and "Cold Beer Always, Snacks Sometimes."

When Frank travels to Tuscany to visit the man he believes to be his relative, the sign in the background which says "Costanza" has "Import/Export" added underneath the name. Clearly this is a an allusion to previous episodes of the show such as "The Cadillac (2)" and "The Stakeout", in which George uses the job title of importer/exporter for several complex lies.

When Kramer picks up the baton to use as a cuestick, he says this line, a shortened version of "You know, I got a hunch, fat man. I got a hunch that it's me from here on in," He is making a reference to a line delivered by Paul Newman to Jackie Gleason in the 1961 film "The Hustler."

The Three Tenors are Luciano Pavarotti, Placido Domingo and Jose Carreras, not "the other guy".

Sally mentions that the BBQ sauce she brought him is the pride of Memphis. If you look closely, the box says it is Bull's-eye BBQ Sauce, a product of Kraft Foods, a company founded in Chicago, IL.

After seeing George with the doll in Monk's, Deena remarks that he should be in a "sanitarium". She likely meant "asylum". A sanitarium is a convalescent hospital for patients recovering from physical illness, such as tuberculosis, whereas an asylum is for the treatment of mental illness.

After Elaine gets the third tenor's autograph in the dressing room of "The Charles Grodin Show," she tries to make out the last name by his signature. But if you look closely at the poster when The Maestro opens it up on his desk in the next scene, the last names of all 3 tenors are on the top part of the poster.

Just before Estelle walks in on Kramer and Frank's pool game, Kramer knocks the cue ball off the table. It reappears on the table later without anyone putting it there. Other balls also move around between shots, particularly the green-and-white one.

You can see Estelle Costanza waiting outside the door a few seconds before her cue to enter the billiards room where Kramer, Frank and The Maestro are playing pool.