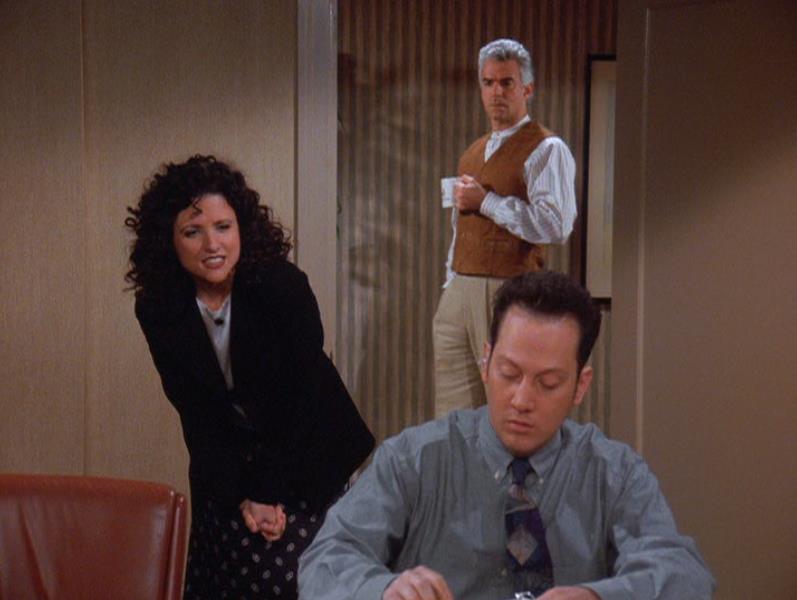 I want you so bad, Bob. You turn me on so much.

Jerry is being sponsored for membership to the Friars' Club, but things go awry when he accidentally walks off with their jacket. George is excited when Jerry starts dating Susan's best friend and they can double date together. Kramer tries to copy Leonardo Da Vinci's sleep patterns, but it doesn't work out the way he'd hoped. Meanwhile, Elaine is suspicious that a coworker is faking being deaf.

Jerry: I love when you're in the middle of a dream and your alarm goes off, you incorporate the sound into the dream so you can keep sleeping. And you'll make any adjustment in the dream to do it. I was with Marie Antoinette in a dream last night. She was on the guillotine, the blade came down her head fell in the basket, rolled over and she started singing Neil Diamond's "Solitary Man."

George: The wedding is delayed until June. It's like a stay of execution.
Jerry: Dead man walking.
George: This is my lucky day.
Jerry: Well, one out of 20,000. That's not bad.

Kramer: I've been reading this book on Leonardo da Vinci. See, that means "from Vinci." Did you know that?
Jerry: Must be some book.

Kramer: I got a lot in the hopper.
Jerry: Didn't know you had one.
Kramer: Oh, I got a hopper. A big hopper.

George: (about Jerry dating Susan's friend) How great is this gonna be? Dinners together, movies together. It'll almost be as good as if I wasn't getting married!

George: I'm telling you, I can coach in the NFL. It's not that hard.
Jerry: That might be the stupidest thing you've ever said.
George: Get out of here.
Jerry: Come on. No, the stupidest thing was when you said Steve Kroft from 60 Minutes is the guy from Seals & Croft.

Jerry: This da Vinci sleep is working?
Kramer: I'm percolating, Jerry. I tell you, I have never felt so fertile. I'm mossy, Jerry. My brain is mossy. Listen to this idea... a restaurant that serves only peanut butter and jelly.
Jerry: What do you call it?
Kramer: PB and J's.

Jerry: So how'd your date work out with Connie?
Krameer: I am telling you, this woman is strange. She never wants to leave the apartment. It's like she doesn't wanna be seen with me.
Jerry: Now you're being ridiculous.

George: How about these seats? Are these fantastic, huh? I feel like Lincoln.
Jerry: Well, let's hope this evening turns out a little better.

Kramer: So are you sure you don't wanna go to the movies?
Connie: No, Cosmo. I like just being here with you.
Kramer: Well, it's It's a bold adventure, huh? This is risky business, huh? I'm all atwitter.

Kramer: I woke up in the Hudson River in a sack!

This is a rare episode where Elaine doesn't share a scene or talk to either George or Kramer.

There really is a restaurant that serves only variations of peanut butter and jelly sandwiches, and it is called "PBJ's".

When George comes in to tell Jerry the wedding date, a roll of paper towels on the counter changes position between shots.

When Jerry and Elaine talk in her office, he picks up a sandwich and starts to eat. Around the time Bob walks in, a napkin appears in Jerry's hand from nowhere.

When Jerry goes to the Santos Brothers' dressing room, the brother who answers the door says that two of his brothers had left already, and we then see that there were only two more brothers inside the dressing room. That makes a total of five brothers. However, when they were performing on stage, there were only four brothers.